Solved! This is the Best Time to Buy a TV

Get the best price on a TV by strategically planning your purchase around these key dates. 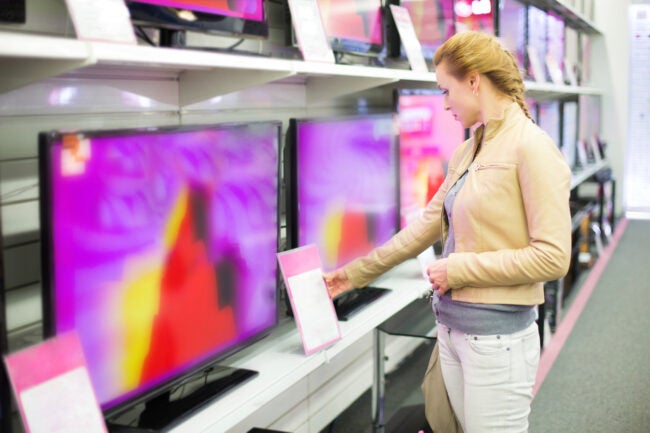 Q: I’m looking to invest in a new TV but it seems that prices fluctuate a lot at different points in the year. When do TVs typically go on sale?

A: While prices for large flat-screen TVs have dropped in recent years as they’ve become more readily available, buying a TV is still a major investment. No matter what size or style you’re looking for, you can potentially save hundreds of dollars by planning your purchase around some key dates and holidays. Before you start shopping, do your research to determine some top contenders for the model you’d like to purchase. By being flexible on the exact model, you’ll be more likely to save money.

Prices do tend to fluctuate throughout the year, allowing you to snag a great deal if you time your purchase strategically. Read on to learn about all of the best times of year to buy a TV.

Related: The Best Entertainment Centers for the Home

Black Friday and Cyber Monday, which both take place during the long Thanksgiving weekend, have become some of the biggest shopping days of the year for both online and brick-and-mortar stores. While Black Friday used to feature one-day sales, in recent years it has turned into a week-long shopping extravaganza, with retailers dropping discounts both before and after the actual date. Like many other holiday sales, Black Friday and Cyber Monday deals are often announced in advance, so you can plan your shopping accordingly in order to get the lowest price on the model you have your eye on.

Keep an eye out for sales in January—right before the big game.

If there’s one day of the year where people want to be able to show off their new flat screen, it’s Super Bowl Sunday. In fact, NerdWallet conducted a survey in 2020 and found that 17 percent of respondents planned to buy a new TV before the Super Bowl. In anticipation of the big game, many retailers discount their TVs, knowing that shoppers might want to upgrade in January before hosting Super Bowl parties. By January, the latest TV models have also been available for about nine months, so it’s also a good opportunity for retailers to clear out their stock before next year’s models hit the shelves.

New TV models are released in the spring.

Generally speaking, the season’s new TV models are released in the spring, around March or April. While the brand new models are likely the most expensive they’ll ever be, last year’s models typically go on sale around this time to help retailers clear out their old inventory. In order to get the best deal, look out for sales on older models in the weeks leading up to the new models being released when both online and brick-and-mortar stores are trying to make room in their stockrooms and warehouses.

Related: Solved! How High to Mount a TV

Amazon is known for its everyday low prices, but there’s one time of year where they offer even steeper discounts on a number of big-ticket items. The two-day sale typically takes place in June or July each year to celebrate Amazon’s birthday. Amazon Prime Day is open to Prime members and usually includes deals on a few popular TV models. Many other retailers offer discounts around the same time in order to rival Prime Day deals, so even non-members can snag a discounted TV by shopping at one of Amazon’s competitors.

Both online and brick-and-mortar stores tend to hold sales on electronics—including TVs—on holiday weekends. After the newest models are released in spring, you may not want to wait until fall to snag a deal on Black Friday. The major summer holidays—like Memorial Day in May, the Fourth of July, and Labor Day in September—are all good times to seek out TV deals. Take note that many of these holiday sales actually kick off a week before the holiday itself.

Solved! This Is the Best Time to Buy Furniture
Advertisement

This Is the Best Time to Do Laundry

10 Apps and Tools That Will Help You Save Money