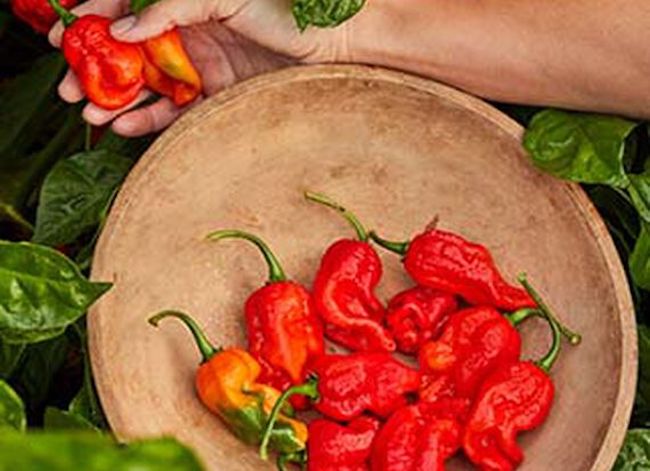 Originally based on the dilution required to eliminate the burn from peppers, these days the Scoville scale measures the alkaloids present in those fruits that cause their searing flavor. Although not king of the heat, ‘Armageddon’—developed by Britain’s Tozer Seeds—is still likely to catch fire with pepper lovers since it matures earlier than the Reaper.

‘Armageddon’ pepper plants grow 2 ½ feet tall, with an average spread of 1 ½ feet, and produce fruits up to 2 inches long. Those fruits require 90 to 95 days to mature, “igniting” from green to sizzling red. At present, seeds of ‘Armageddon’ appear to be more readily obtainable from British seed sellers than from American companies. However, plants can be ordered from Burpee or purchased at garden centers that carry Burpee products.

Turning Down the Heat

Gardeners who would prefer kinder, gentler peppers may want to opt for Burpee’s ‘Habanada,’ advertised as the “first heatless habanero.” It reportedly tastes “tropical,” but, as for those Scoville units—“nada.” People who like a little more flame in the flavor than that possessed by such sweet peppers, but don’t want a raging bonfire, should try poblano chili peppers first, moving up the scale to jalapeños if the poblanos aren’t hot stuff enough.

RELATED: Burpee Says Immunity Gardens Will Be Big This Spring—Here’s How to Create One in Your Backyard

After you purchase your peppers, place them in a protected outdoor location in the shade, only for about 30 minutes on their first day. Gradually expose them to more time outdoors and more sun each day for one to two weeks. If frost is forecast, take the plants indoors until that danger is over. Once the peppers are accustomed to full sun and all threat of frost has passed, they can be transplanted.

Choose a site that receives at least 6 to 8 hours of sunlight per day, where the soil is well drained with a pH between 6.2 and 7. Avoid locations where you have grown peppers, tomatoes, or other members of the nightshade family recently. If you intend to raise the peppers in containers, select pots that hold at least 5 gallons of soil. (Such pots usually measure about 12 inches in diameter.)

At the same time you begin hardening off your peppers, spread compost over the soil in their future bed and till it in to a depth of 8 inches. Burpee recommends covering that ground with black polyethylene mulch to warm the soil quickly, help keep it damp, and suppress weeds. If you intend to use containers instead, fill them with fresh organic potting mix and place only one plant in each pot.

If there are no planting openings in your plastic mulch, use a bulb planter or empty can to punch 3-inch-diameter holes 18 inches apart from each other. After removing the peppers from their containers, insert them into those openings, digging holes large enough to set the plants 1 inch deeper than they grew in their original containers. When putting each pepper in place, gently spread its roots apart before covering those roots with soil.

After setting out your peppers, mix 2 tablespoons of fish emulsion into 1 gallon of water, and water your peppers with it. Two weeks later, scratch organic slow-release tomato fertilizer—which also works well for peppers—into the soil around your plants. Use 3 tablespoons per plant, repeating that application once a month thereafter. Make sure your pepper plants receive the equivalent of 1 inch of water per week from rainfall, irrigation, or hand watering.

Snip off ripe peppers with pruning shears, leaving a bit of stem attached to each one. Always wear disposable gloves when cutting or chopping hot peppers and avoid touching your face during that time or you will “feel the burn.” Store peppers inside a plastic bag in your refrigerator’s vegetable drawer, where they should last for two to three weeks. You can preserve your peppers by drying, freezing, or pickling them.

The Best Fertilizer for Peppers and Veggies in 2022
Advertisement

13 Kitchen Leftovers That are Good for Your Plants