Old-fashioned, farm-style Dutch doors are making a comeback for interior and exterior applications. From cost and installation to safety concerns, here's all you need to know about these country classics. 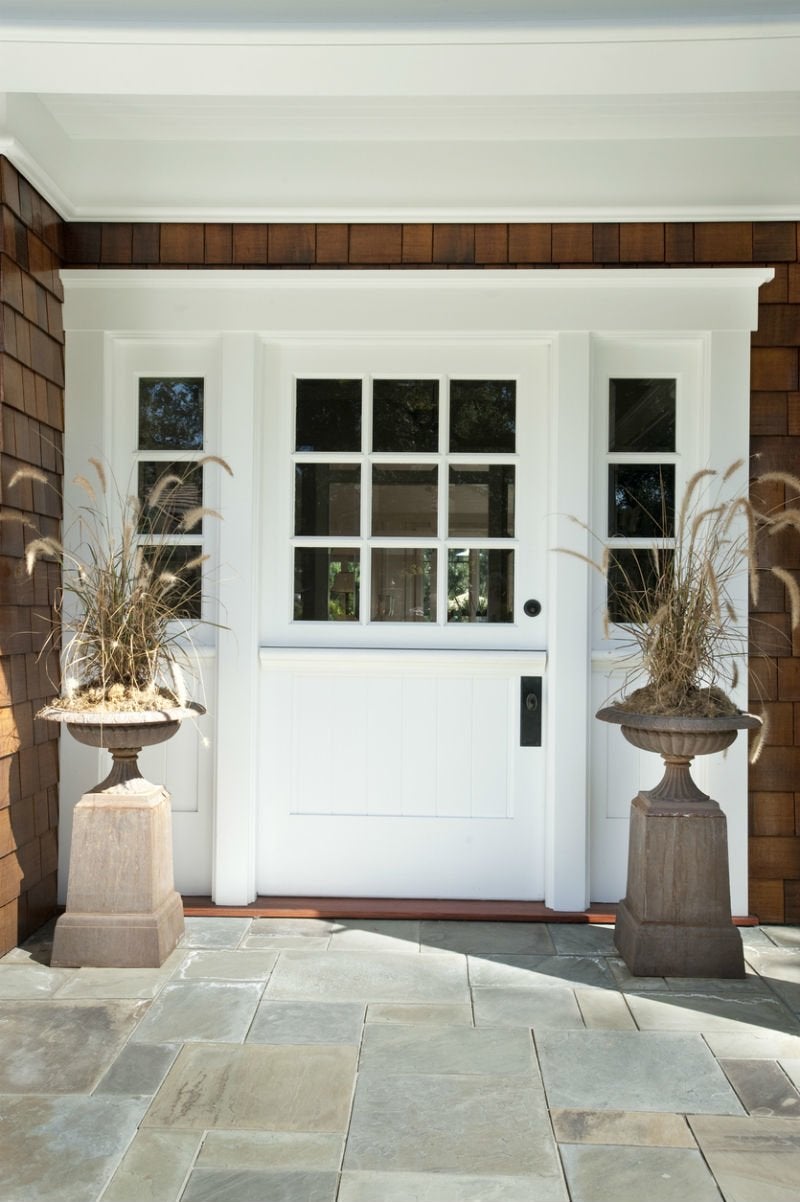 Dutch doors—horizontally double-opening charmers—evoke endearing visions of quaint country cottages, thatched roofs, and freshly baked pies cooling in a summer breeze. While the design is nearly 400 years old, its appeal is timeless, so if you’re considering Dutch doors for your home, follow along to learn a bit about them, where they work best, and what installation entails.

What is a Dutch door?

Originating in the farmlands of the Netherlands, these split doors found their way to Dutch settlements in the early American colonies. They’re known by any number of names, including stable doors, double-hung doors, split doors, and half doors. The charming design allows the top half of the door to be opened while the lower half remains shut. Dutch doors are available in single and double styles.

A single Dutch door is split in half horizontally so the top and bottom can be used independently. A latch secures both halves of the Dutch door together, allowing the door to be opened and closed as one unit when needed.

Single Dutch doors can be used instead of single traditional doors for either the interior or exterior of your home. Dutch doors come in several different styles, including:

Installing a double Dutch exterior door can create an entryway with serious visual impact. With these side-by-side Dutch doors, you have the option of opening both or just one of the top sections of the doors while keeping the lower parts closed. As is the case with a single Dutch door, you can latch the top and bottom sections together so they operate like typical one-piece doors.

Double Dutch doors are available in standard door sizes and, if you’re willing to pay a bit more, can be custom-made to fit nonstandard openings.

Just like single split doors, double Dutch doors come in traditional, contemporary, and farmhouse styles. Double Dutch doors are generally more common as front exterior doors because of their space requirements. For this reason, an interior double Dutch door is more likely to be found in a larger or custom-built home that has the capacity to accommodate its expansive size.

The History of Dutch Doors

Farmhouse Dutch doors first appeared in Holland in the 17th century, and at that time, their purpose was purely functional. With the bottom and top half operating separately, the bottom could be left closed to prevent rodents and farm animals from wandering into the house, and the top could be opened to let in light and fresh air. The lower door featured a small shelf along its top to help stabilize the structure of the split door while offering a spot for baked goods to cool.

Dutch immigrants brought the Dutch barn door design to America, and it quickly came into favor with early colonists and rural dwellers. The charming half door remained common until the late 1800s when the screen door was invented. As the exterior Dutch door trend waned, however, interior versions, which were often used to separate kitchens and dining rooms, became more popular. You can still buy rustic Dutch doors today, both interior and exterior, although options are limited.

RELATED: Solved! How Can I Find the History of My House?

The Advantages and Disadvantages of Dutch Doors

The recent popularity of modern farmhouse style has brought Dutch doors back into fashion. You’ll now see them at house entries and kitchen doors, on outdoor buildings such as gardening sheds, and inside homes as well. Charming as they are, Dutch doors also have some functional considerations.

A split door offers an appealing aesthetic, but there are some safety precautions you should consider before investing in one. Though many Dutch door designs are secure, there are special considerations you need to keep in mind with Dutch doors:

RELATED: Buying an Old House? Be Prepared to Live With These 12 Quirks

A Dutch door requires a doorknob, deadbolt, door latch, and hinges. These are all standard door hardware, but given the farmhouse vibe of a Dutch door, you may want to spend a little more for premium styles in keeping with the door’s charm.

While some of today’s top door manufacturers, such as Andersen and Marvin, do not sell premade Dutch doors to the public, they offer custom door-manufacturing services so you may be able to have a Dutch door designed to your specifications. One popular manufacturer, Jeld-Wen, currently sells Dutch doors through home improvement centers like The Home Depot.

RELATED: 15 Old House Features We Were Wrong to Abandon

Interior Dutch doors can be delightful additions to the home, but you may have to do a little sleuthing to find the perfect one for your needs. Not all home improvement centers sell these European-style interior doors, so consider checking with smaller, boutique-type door builders, such as the Simpson Door Company.

Dutch doors are great for adding character and extra function to doorways of your home. This traditional design had more practical utility back when it first came into use in the 17th century, when screen doors and air conditioning weren’t yet invented. These days, Dutch doors are often chosen for their aesthetics, but they still work wonderfully as baby or pet gates, and to let fresh air into the home.

When properly installed and with the right hardware, a Dutch door is safe and secure, even when used as an exterior door. Unless you are well versed in door installation, it’s advisable to let the pros install your Dutch door to ensure weathertight results.

To add to your home’s curb appeal or give it a small update, a Dutch door can really make an impact. These beautiful split doors are having a bit of a resurgence right now, especially in rustic- or farmhouse-style homes. But before you decide on a Dutch door, check out these frequently asked questions and answers to learn a bit more about this door style and how it’s used today.

Q: Can you turn a regular door into a Dutch door?

Turning a traditional door into a Dutch door is a project you can accomplish over a weekend. Using basic carpentry skills, cut the existing door horizontally, move the doorknob to the bottom half, add hinges so there are at least two at the top and two at the bottom, and install a latch to hold the door together when needed.

Dutch doors are much more expensive than standard doors. Not only is the door itself more expensive, but split doors also require more hardware than typical doors because there are more moving parts. Additionally, when Dutch doors are used as exterior doors, the gap between the top and bottom sections requires a weather seal. A premade Dutch door will cost $300 to $500 more than a comparable solid door from the same manufacturer, and a custom Dutch door can run upwards of $3,000.

Q: Are Dutch doors easy to break into?

Poorly maintained or lightly secured Dutch doors may have more weak points than a standard one-piece door, and this can leave them vulnerable to break-ins. An exterior split door should be secured with a deadbolt on the top half and the securing latch and a locking doorknob on the bottom half.

Some jobs are better left to the pros
Find licensed contractors in your area and get free, no-commitment estimates for your project.
Find Pros Now