Around the world today, as in centuries past, homes are being built, not with traditional wood, stone, or brick, but with earthy materials like clay, sand, and straw.

This is nothing new: For thousands of years, people have been living in shelters made from earth-based building materials—that is, homes more or less made from dirt. As sustainable practices have surged into the mainstream, natural modes of construction have found (or returned to) popularity.

Featuring thick walls that absorb sunlight, earthen homes remain cool through summer and stay warm through winter. Since they are not built from wood, they are not as vulnerable to termites and fires, though in comparison to traditional stick-built structures, they are more prone to dampness.

Scroll down to read about five different earthy approaches to building eco-friendly homes for today. 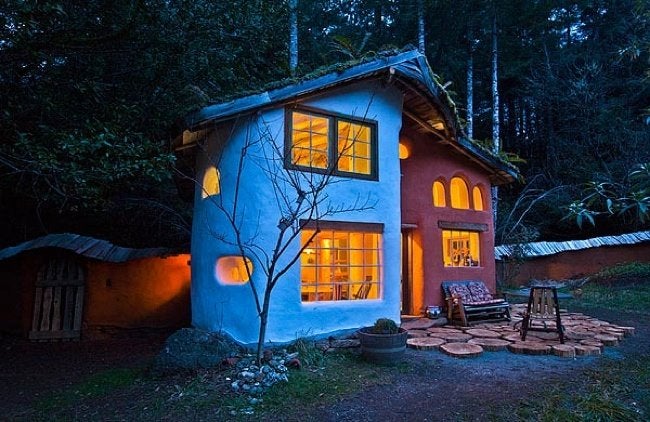 In Britain, there are some cob homes that have remained standing for hundreds of years. In 1997, the region welcomed the first new cob home to have been built in over 75 years. Though cob homes of old often included dung as a key ingredient, today’s iteration is built from clay, sand, straw and water. (The straw performs the same role that re-bar does in concrete.) That mixture is molded to create solid and smooth structures, which often have rounded corners.

An earth-bermed shelter is built into or against—you guessed it!—the earth. In essence, the topography of a building site, whether naturally formed or shaped by men and machines, allows for habitable space to be carved out in the creation of a semi-subterranean dwelling. Champions of earth-bermed construction praise the quality of insulation that soil provides.

If you’ve been to the Southwest, you’re familiar with the beauty of adobe architecture. Adobe, long used by indigenous groups like the Anasazi, is water, straw, sand, and clay, a mixture that is formed into bricks and then sun-dried. Adobe is particularly well suited to hot climates; the material absorbs heat from the sun, fostering a cool interior.

The walls of rammed-earth homes are built from dirt that is packed (by hand or by tamper) into small blocks or bricks. It’s a “dirt cheap” material, provided that your building site makes available a sufficient amount of soil that is usable for the purpose.

Here’s another type of building that lives up to its name: Earthbag construction, a relatively recent technology, depends on polypropylene bags (or tubes) filled with dirt that is sourced either from the site or imported from elsewhere. No special binding or molds are required; each row of bags is laid, then compacted from above and left to cure to a hard finish.