16 Foods You Should Never Store Together, Unless…

Don's store these fruits and vegetables together, or else you'll end with a bowl or fridge full of spoiled produce. The culprit? Ethylene gas. 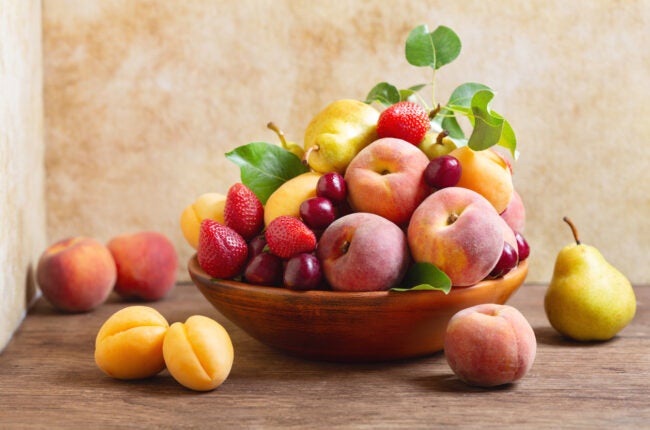 If you typically buy a bunch of fruit and vegetables and throw them all in a bowl on the countertop or one bin in the refrigerator, then it’s time to talk about your gas buildup. No, not that kind of gas—ethylene gas.

Ethylene gas is a naturally occurring plant hormone that causes various actions during a plant’s life cycle, such as seed germination and adaptive responses during stressful events like drought or flooding. In some cases, fruits and vegetables continue to produce ethylene gas even after they’re picked or cut, especially when sealed tight in freezer bags. In fact, some fruits (called climacteric fruits) don’t ripen until they begin releasing a great amount of ethylene gas. Think of when bananas go from green to yellow. Climacteric fruits respond to the presence of ethylene gas by creating even more ethylene. Since they encourage each other, ripening ethylene-makers should be stored together (not unlike troublemakers).

However, when ethylene-producing produce is lumped in with ethylene-sensitive fruits and vegetables, the gas will cause the sensitive foods to reach that same rapid ripening stage when it’s unnatural for them to do so. This causes them to rot.

Many tree fruits generally produce ethylene because they grow higher up from the ground. But they’re not the only ones with a lot of gas to give. You can learn more about storing foods from the USDA’s FoodKeeper App—and the following list of foods you should never store together.

Apples are notorious ethylene producers. How much they emit depends on the type of apple and when they’re harvested. Varieties like McIntosh apples peak at higher ethylene levels than others. When their massive ethylene production falls off, apples begin to soften. That’s why you can bite into a crisp McIntosh just after picking it but find only mushy apples in the same bunch only a couple of weeks later.

Regardless of variety, apples don’t play well with others. Keep them stored in a cool place by themselves and remove them and other ethylene producers from shared produce bags right away. Although it can be destructive, apples’ ethylene production can help most varieties of potatoes by keeping them from developing eyes.

Avocados don’t produce ethylene until they’re picked, meaning they don’t start to ripen until after they come off the tree. Once they do, though, they start making ethylene like mad. The fruit takes a long time to begin ripening, but then grouped avocados soften at once, influencing each other. Once ripe, avocados last only for a few days in the fridge.

Although usually a nuisance, ethylene gas is the perfect solution for when you need an unripe avocado to turn into avocado toast the following day. That’s when you take a major ethylene producer like an apple or ripe banana and trap it in a paper bag with the avocado so that it can’t escape the gas. Before long, your avocado will be fork-tender and ready.

Growers pick bananas and plantains while green, before they’re climacteric, so it doesn’t do you any good to stick an avocado in a bag with a green banana. But once that switch is flipped and bananas and plantains begin ripening, they both produce a lot of ethylene, according to a 2018 Nature Plants study. You’ll also see them turn yellow, and quickly.

Some melons, such as cantaloupe and honeydew, produce their own ethylene and some (like watermelons) don’t. But they’re generally picked when green and manipulated with external ethylene, a common trick in the commercial fruit business. In the case of cantaloupe, it’s sometimes genetically modified to stall ethylene production so that it has a longer shelf life. Regardless, when ripe and fragrant from the stem end, cantaloupe and honeydew will affect other produce, even when in the fridge.

RELATED: How To: Grow Fresh Produce from Your Leftover Groceries

Figs produce a lot of ethylene, but only in their later stages of development. Picked too early, they’ll never ripen without exposure to ethylene. That’s why ancient Egyptians used sliced ripe figs to hasten the maturity levels of others. Spaniards also knew a useful trick: When you cover the eyes of young figs still on the tree with olive oil, it makes them ripen faster by sealing the ethylene inside. The lesson here? Figs carry both their seeds and their secrets inside.

Like bananas, these popular fruits are picked unripe, when their ethylene production is low. As they mature on your counter, though, their ethylene levels will suddenly spike—so a ripening nectarine, peach, or plum will start to develop brown spots if left unrefrigerated. You can store these fruits with each other since they’re similar in nature, but keep them away from ethylene-sensitive foods.

Pears are also low on ethylene gas when green. One traditional Chinese method can ripen pears at that stage, involving burning ethylene-containing incense near the fruits. Once ripe, pears give off a large amount of ethylene gas, however. At that point, store them in the refrigerator to slow down the ripening.

Tomatoes are moderate ethylene producers. Like apples, different types will change in color and ripen as their ethylene levels increase. You might notice that in packs of colorful heirloom cherry and grape tomatoes, some go wrinkly before others—and once one does, the whole bunch starts to deteriorate. If you have the room, it’s best to store tomatoes of all varieties separate from each other, as well as other produce. In addition, store tomatoes out of the refrigerator, or risk them losing flavor.

RELATED: The Best Food Storage Containers for Your Fridge and Pantry

Foods That Are Sensitive to Ethylene Gas

Some citrus fruits, berries, and vegetables don’t create ethylene gas and are fairly impervious to it. Meanwhile, others are so sensitive that just being near ethylene makers—even in the refrigerator where low temperatures inhibit the gas’s production—causes them to develop brown spots, wilt, discolor, or otherwise go bad. Generally, store ethylene-sensitive vegetables away from ethylene producers as much as possible to keep your produce in peak condition.

Broccoli and cauliflower are well-known for producing gas of a kind—but not ethylene gas. And, in fact, they’re quite sensitive to it. Once exposed to ethylene, even in the refrigerator, broccoli will yellow and cauliflower will develop brown spots. Other related vegetables, including Brussels sprouts and cabbage, should also be kept sealed away from ethylene producers.

You might not see visible signs on carrots, but they also are sensitive to ethylene gas. It causes them to lose their sweetness upon exposure and instead develop a bitter flavor. Many people commonly leave carrots in the bag they came in, but it’s better to transfer them to a more secure reusable produce bag rather than a permeable plastic bag.

If you’ve ever wondered why your cucumbers turn slimy and develop pits and soft spots so quickly, it could be because you’re storing them with apples and other ethylene producers. Highly sensitive to climacteric fruit, cucumbers should be kept safely in a refrigerator produce bin where humidity is also controlled.

Whole eggplant likes a lot of air—and no ethylene—to stay fresh. Store eggplants at room temperature in a perforated bowl or paper bag for a couple of days, as long as they’re not near apples, ripening bananas, avocados, or stone fruit. If they’re too close to climacteric fruit, they’ll develop brown spots. Once they’re cut, eggplants require refrigeration.

RELATED: 12 Things You Should Never Store on Top of the Refrigerator

Not only are green beans sensitive to ethylene, but reducing the amount of the gas in their atmosphere improves their shelf life. To keep these vegetables from getting rusty, take advantage of “green bags” or other reusable produce bags designed for this purpose.

When lettuce and other leafy greens are exposed to ethylene gas, they wilt, yellow, turn brown, and eventually become slimy with rot. Greens are tough to store in the fridge because they take up a lot of space. However, if you don’t plan on eating them right away, it’s worth it to invest in a system that keeps them in an ethylene-reduced, humidity-rich environment.

While peppers and tomatoes are both in the nightshade family, Max Planck Institute of Molecular Plant Physiology research made it clear that they’re very different from tomatoes in terms of ethylene production. Unlike tomatoes, peppers don’t continue to ripen after being picked. So pluck them when they’re ripe and eat them soon after that. Some peppers, however, don’t react much to the presence of ethylene, either. In fact, you might have noticed that chili peppers last a much longer time in your produce drawer than do bell peppers.

Some types of squash and pumpkins may look like they can withstand just about anything, but they’re actually highly sensitive to ethylene gas. If you’re planning on carving into some pumpkins for Halloween, don’t store them near the apples meant for bobbing or you won’t have anything left to cut.

RELATED: The Most Controversial Items You Can Leave on a Kitchen Counter

12 Things You Should Never Store on Top of the Refrigerator

10 Things You Should Never Store Under Your Sink