Turns out, mom was right: this superfood is good for you, and it’s easy to grow—as long as you have the time. 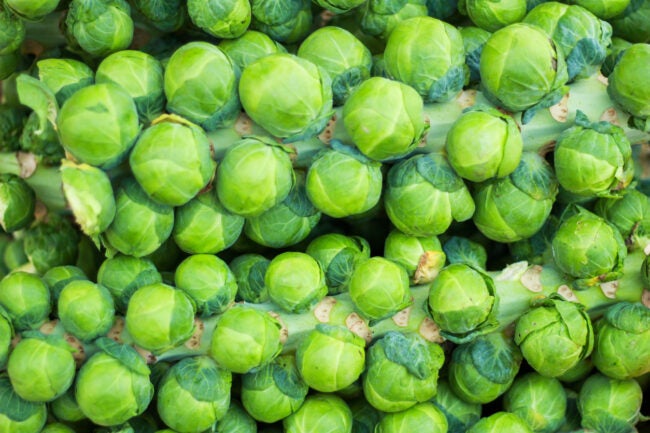 If tomatoes are the heroes of the summer garden, then brussels sprouts are the kings of cool-season crops. Not only do they make a visually interesting addition to the fall vegetable garden, but brussels sprouts are incredibly good for you, too. They’re packed with antioxidants that help prevent cell damage in the body, high in fiber, and rich in vitamins K, C, and B6, potassium, iron, thiamine, magnesium, and phosphorus. They’re even a good source of ALA omega-3 fatty acids.

These delightful members of the cabbage family love cooler weather, so they produce best when grown for a fall or early winter harvest, allowing you to enjoy your garden in the winter. While they might require a longer growing season than peas or carrots, these tips for growing brussels sprouts will have you harvesting your own crop in no time.

RELATED: 12 Perennial Vegetables to Plant for Years of Fresh Produce

Growing Brussels Sprouts at a Glance

Though many people refer to them as “brussel” sprouts, the common name for Brassica oleracea of the Gemmifera cultivar group is, in fact, brussels sprouts. A distant relative of a wild mustard once farmed by the ancient Romans, brussels sprouts take their name from Brussels, Belgium, where they were first cultivated in the 16th century.

Most brussels sprouts require 3 to 4 months of growing time from seed, so the trickiest part about growing brussels sprouts is the timing. The brussels sprouts growing season will greatly depend on the climate in which you live. Because they don’t tolerate heat well, they are considered cool-season vegetables. In general, brussels sprouts prefer temperatures between 45 and 80 degrees Fahrenheit, though they can tolerate lower temperatures. In fact, the University of Minnesota Extension states brussels sprouts can stay in the garden as long as temperatures stay above 20 degrees. Many varieties are sweeter and fuller in flavor when harvested after the first freeze.

Seen in a fall garden full of vining fall squash and compact lettuce, brussels sprouts add some edible drama to the mix. Growing to heights from 2 to 3 feet, they produce roundish green, or sometimes purple, miniature cabbage-like buds all along their stem, with a crown of leaves at the top.

RELATED: How to Cultivate the Perfect Soil for Your Vegetable Garden

A number of plants will make excellent companion plants for brussels sprouts, including nasturtiums and marigolds, which are thought to help ward off cabbage worms. Other companion plants include spinach, aromatic herbs, sunflowers, and anything in the onion family.

When is the best time to plant brussels sprouts?

To determine the best time to plant, count backward from the first fall frost date using the seed packet as your guide for timing. Most brussels sprouts mature between 80 and 90 days, so use the specific seed variety’s days to maturity to determine when they should go in the ground. It’s usually 4 months before that fall frost date.

The stages of growing brussels sprouts can differ based on winter climate. Seeds should be started in early to mid-summer for a fall or early winter harvest. If winters are mild, meaning rarely below freezing, seeds can be started later in summer for a mid- to late-winter harvest.

Where can brussels sprouts grow?

Brussels sprouts require soil that drains quickly and is rich in nutrients. Try adding compost to the soil before planting. Planting brussels sprouts in raised beds can help maintain a more consistent soil temperature. Additionally, mulching the beds will keep the soil from getting too hot in the summer. Make sure they are getting at least 6 to 8 hours of sunlight per day.

How much space do brussels sprouts need to grow? Unless indicated otherwise on the seed packet or growing instructions, aim to space brussels sprouts at 18 to 24 inches apart to give them plenty of room to grow.

How do you plant Brussels sprouts?

Planting brussels sprouts is a simple process. Plant once they are at a seedling height of 6 inches or direct sow seeds in the soil.

If you are wondering how to grow brussels sprouts from seeds, start them indoors in a quality seed starting mix. Plant directly from seedlings following steps 3 and 4 above.

Can you grow brussels sprouts in containers?

Brussels sprouts can indeed be grown in containers. Here’s how to grow brussels sprouts in pots: Find a container that is at least 1 foot wide and as deep with plenty of drainage holes. A big pot, or even a 5-gallon bucket with holes drilled in the bottom, can work well. Use a potting soil with added compost to ensure the soil will drain quickly. For best success, aim for growing a dwarf variety such as ‘Long Island’ or ‘Catskill’.

Fertilize every 4 weeks to ensure the plants are getting enough nutrients. Water consistently, keeping in mind the soil in pots dries out faster than in the ground, and make sure the pots are placed somewhere they’ll receive enough sunlight.

RELATED: 12 Climbing Vegetables That Are Perfect for Compact Gardens

To ensure strong sprout development, make sure the brussels sprout plants have a consistent watering schedule. Like most vegetables, brussels sprouts do not like soggy soil, but they do need it evenly moist. They like about 1 inch of water per week per square foot of soil, however they might require more water, especially if it is hot, dry, or the soil is sandy and drains faster.

Because brussels sprouts are a cool season crop, be mindful of keeping the soil moist enough in summer months, supplementing with regular watering if the weather is hot or dry. Mulching the beds will help maintain moisture and keep the temperature of the soil cooler in hot weather.

Once seedlings reach 6 inches high, they should be thinned and fertilized with a nitrogen-rich vegetable fertilizer. They can then be fertilized every 3 to 4 weeks throughout the growing season.

Apart from removing damaged, diseased, or yellowing leaves by hand, there is no need to prune brussels sprouts. Removing these poor leaves, however, will help the plant put more effort into growing the sprouts.

Brussels sprouts are generally propagated from either seeds or starts. Because brussels sprouts are biennials and won’t produce any seed-holding flowers until the second year, most gardeners pull up the plants each year and germinate new seeds from packets the following growing season.

Because they appreciate cooler weather, it’s most common to sow brussels sprouts seeds in the garden, though seeds can be started indoors. Some gardeners will try to grow seedlings propagated from brussels sprouts as cuttings. It’s not necessarily the most successful method, but it can be fun to try. Start in the late spring or early summer for cool fall weather harvesting.

Like other plants in the cabbage family, brussels sprouts are prone to a number of pests and diseases. The most common pests include aphids, cabbage loopers, cabbage worms, cabbage root maggots, flea beetles, and stink bugs. Fungus can include white mold, black rot, and downy mildew.

One of the best ways to prevent any pests or diseases is to practice crop rotation. Always avoid planting any member of the Brassicacea family, including brussels sprouts and broccoli, in the same garden bed from year to year. Any pests or diseases can be transferred in the soil, so not only should infected plants be destroyed immediately, the bed should not be used the following year for any plants in this family.

A single brussels sprout plant stalk will yield between 50 and 100 sprouts, making this an abundant crop to harvest. Brussels sprouts typically grow in height before they begin producing sprouts, with each sprout growing in its own leaf axil.

When is the best time to harvest brussels sprouts?

Brussels sprouts begin to mature from the bottom of the plant upward, so judge harvest season by the size of the lowest sprouts. Once these reach about 1 inch in diameter—think slightly smaller than a golf ball—it’s time to start the harvest. Don’t be tempted to let them grow much bigger, which can lead to a bitter taste.

How do you harvest brussels sprouts?

Although entire stalks of brussels sprouts are frequently sold at farmer’s markets, most gardeners prefer to pick the sprouts individually, since a secondary crop may grow toward the base of the stem. The second crop of sprouts are usually looser than the first sprouts but will still taste good.

How do you store brussels sprouts?

Freshly picked brussels sprouts will keep for up to a week in a plastic bag in the refrigerator. Don’t wash them before storing, as the moisture will make them rot faster. Brussels sprouts emit gases, so they are one of the foods that shouldn’t be vacuum sealed. If you do need to vacuum seal, first blanch and then completely cool and dry the sprouts before sealing.

Brussels sprouts can also be blanched and frozen, and can last up to a year or more in the freezer. Some gardeners will pickle Brussels sprouts, giving them an even longer shelf life.

Looking for more edible plants to grow at home? Check out our guides on growing carrots, onions, and asparagus.

TAGS:
HOW TO
GARDENING
GROW
More From Bob Vila

Frost Coming Your Way? What to Do With Veggies in the Garden