12 Perennial Vegetables to Plant for Years of Fresh Produce

If you would rather veg than replant annual vegetables every spring, try some of these long-lived perennial produce producers instead. 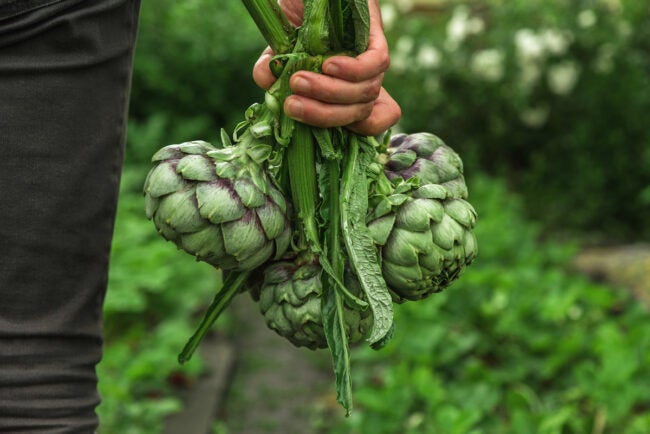 What are perennial vegetables? They are edible plants that come back every year without you having to sow them more than once. Actually, some are grown most often from purchased roots rather than from seeds. Almost all can be started from seeds, if necessary, though seedlings will mature later than root-grown plants.

The advantage of perennial fruits and vegetables is that you don’t have to replant them every year. The disadvantage is that, like other perennials, they tend to emerge early and linger late, so you will have to weed or mulch them for much of the year rather than just during summer.

You’ll also need to be patient, since experts advise that you put off taking large harvests from some of these edible perennials—especially asparagus and rhubarb—until they are about 3 years old. Others are a bit too quick and thorough about “putting down roots” and can be so vigorous as to be quite invasive. Several of these perennial crops also contain oxalic acid, which people with some health conditions such as arthritis, gout, and kidney stones should avoid.

Probably the most popular of the perennial food plants, asparagus can take two or three years to become well established but then can continue producing spears for at least 15 years or so. Hardy in USDA zones 2 through 9, asparagus crowns will send up those spears for a couple months in spring, after which their growth turns ferny and perhaps seedy—depending on whether the plants are male or female.

Although its tart, red-tinged stalks generally are used as a fruit in pies and other desserts, rhubarb technically is a perennial vegetable in USDA Zones 4 through 7. Like asparagus, it most often grows from purchased roots and can take a few years to begin producing well.

Mature plants will provide thick stalks to harvest for one to two months during spring, after which those plants should be allowed to grow uncut. Keep in mind that their large leaves are toxic and the oxalic acid present in their stalks might be harmful to people with some health conditions.

Related: 11 Types of Berry Bushes You Should Plant This Spring

Although neither an artichoke nor from Jerusalem, this somewhat deceptively named plant actually is a sunflower native to the United States. Hardy in USDA zones 3 through 9 and also called sunchoke or earth apple, it is valued for its water-chestnut-like tubers that growers can harvest in autumn and used as a substitute for potatoes. The plant includes a bonus of 3- to 6-inch yellow late summer blooms that provide seed for wild birds, being much loved by finches. This sunchoke can choke out other plants due to its invasive nature.

Often started with the planting of dormant roots in spring, the true artichoke isn’t as hardy as the previously mentioned imposter but can survive as far north as USDA Zone 6 if well mulched. However, it performs best in zones 7 through 10. Its silvery lobed foliage is attractive enough for the flower garden, and this artichoke’s fruits actually are its large green flower buds. If you forget to harvest them at the proper time in early summer, they’ll provide you 6-inch purple blooms as a consolation prize later. As with most perennials, this one generally doesn’t flower during its first year.

Closely related to globe artichoke and also hardy in USDA zones 7 through 10, cardoon looks quite similar to its previously described kin, though its plants are larger and its 3-inch flowers smaller than those of the artichoke. Therefore, it usually is raised for its leaf stalks, which are blanched (wrapped to keep them in the dark) for a month or so before they are cut and cooked.

If you are among the some who “like it hot” in reference to the spiciness of foods, you’ll want to grow horseradish in USDA zones 2 through 9 among your other edible perennials. Described by The New Sunset Western Garden Book as looking like a cross between a dandelion and a carrot, the plant makes large white roots, which is where the heat hides. Be careful to harvest most of it every year, though, or this “horse” will soon gallop all over your garden.

Related: 10 Tips for Turning Your Yawn of a Yard Into an Incredible Edible Landscape

The Egyptian walking onion, hardy in USDA zones 3 through 10, “walks” when its heads of bulbils bend to the ground and sow themselves to become new plants. You may want to take steps to contain them before they stroll too far afield! The freshest of their shoots can be harvested and used as green onions. Keep in mind that, although also edible, the small reddish or purplish bulbs at the bases of those shoots are very hot. Probably actually native to India or Pakistan, the plant does, at least, walk like an Egyptian!

Speaking of spicy, one of the peppery perennial greens, watercress—as its name implies—likes to grow in shallow water in USDA zones 3 through 11. That preferably should be clean, moving water such as what flows in a creek. Usually started from either cuttings or seeds, it is at its best during the cooler months and should be harvested while still young, since it loses much of its bite after it blooms.

If your taste runs more toward sour than spicy, try garden sorrel, which grows in a rosette, has a tart flavor, and is hardy in USDA zones 3 through 7. You can harvest its young leaves at any time during the growing season and add them to salads or soups, though cooking eliminates much of the tartness. Keep in mind that, as with rhubarb, sorrel’s sour flavor derives from oxalic acid, which can be problematic for some people.

Most of us know chicory as the weed with dandelion-like foliage which makes true blue blooms along roadsides on summer mornings, in USDA zones 3 through 9, before closing those blue eyes during the afternoon. However, its bitter leaves have long been used as salad greens and its ground roots as a coffee substitute. A variety of garden cultivars are available, with the red-leafed types generally known as radicchio.

Described as “more or less edible” by Plants for a Future and as “nutritious. . .in reasonable quantities,” this plant, hardy in USDA zones 4 through 8, contains some saponins and oxalic acid. So, it shouldn’t be consumed in large amounts or by those sensitive to these compounds. However, its leaves—best when harvested in spring or early summer—reportedly make a good substitute for spinach, while its shoots often are boiled and eaten like asparagus. Keep in mind that it is related to the weed called lamb’s quarters and could become weedy itself.

Although a member of the legume family that produces showy reddish-brown flowers and edible “beans,” this vine most often is grown for its tubers, which can be cooked as potatoes are. Also called potato bean and hardy in USDA zones 4 through 9, the native “nut” is one of the grabbier types of perennial vegetable plants and may climb all over other species unless provided with a trellis. Reportedly used by the earliest American colonists, it develops plenty of colonies of its own! The vine will die back during winter to re-sprout in spring if tubers are left in the ground.

How to Grow Cucumbers