Is the quest for comfort a constant battle in your home? Put an end to cranky complaints and stealth thermostat adjustments by installing a zoned HVAC system that will help keep temperatures—and tempers—on an even keel. 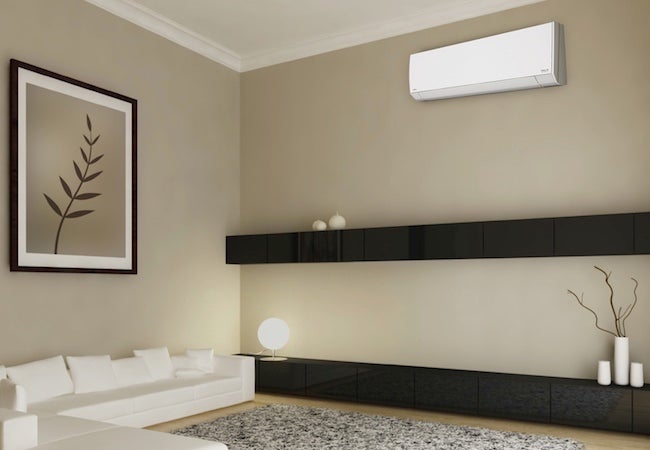 This article has been brought to you by Fujitsu General.

It seems like every time you look at the thermostat, it’s set to a different temperature. There are two possible explanations. One: Ghosts. Two: You live with at least one other living, breathing human being who insists that it be a few degrees warmer or cooler and blames you for changing the setting. Sound familiar? You’re definitely not alone. In households across America, families have been feuding over the thermostat for what seems like forever, and they continue to do so for one simple reason—different people prefer different temperatures. That’s an inevitable, incontrovertible biological fact, and there’s just no getting around it.

Unfortunately, forced air—the most common HVAC system in America—makes it quite difficult for everyone under the same roof to feel comfortable at the same time. That’s because in many configurations a single thermostat governs the temperature of every room in the entire house. In theory, it’s a one-size-fits-all approach. But in reality, in a home where the HVAC system is trying (typically unsuccessfully) to maintain one uniform temperature, only one person ever gets to feel truly comfortable—and usually, it’s  the last person to have touched the controls! In other words, by ignoring individual preferences, traditional HVAC too often leads to wars over the thermostat.

Here’s what you may not have known: While heating and cooling technologies went virtually unchanged for decades, recently there’s been an explosion of innovation. Perhaps the most exciting breakthrough? Zoning. Simply put, zoning enables homeowners to target temperatures on a room-by-room basis. Think of the implications! With a zoned system, there’s no longer any need to argue with loved ones over the correct definition of comfort. You can each define comfort for yourself, choosing the temperature you like best for the spaces where you each spend the most time. Think of it as the climate-control equivalent of a happy compromise.

Even better is that, in addition to custom-tailored cooling and heating, the best zoned systems also deliver significant boosts in efficiency. In the past, forced-air systems typically scored Seasonal Energy Efficiency Ratio (SEER) ratings between 4 and 10. Modern zoned solutions score significantly higher. In fact, Fujitsu General offers a range of ENERGY STAR-rated systems capable of achieving SEER ratings as high as 33—more than twice the efficiency level mandated by the federal government! Besides benefiting the environment, such efficiency also benefits your bottom line, saving you up to 25 percent on your monthly utility bill.

How’s that even possible? Remember that traditional HVAC relies on ducts installed throughout the home to transmit conditioned air. Fujitsu takes an entirely different approach. Its “mini-split” design dispenses with ductwork altogether, which makes installation easier and frees up the square footage the ductwork would otherwise hog. But in terms of efficiency, the key point is that ducts are known—even notorious—for leaking air and, in the process, wasting energy. That’s a major reason why traditional HVAC costs more than it should, and why ductless cooling and heating comes with a built-in efficiency advantage.

Another reason homeowners save with zoned, ductless mini-splits: The technology makes it possible to seize savings opportunities. Think of it this way: In a home with traditional HVAC, there’s no way to turn up the AC or heat in one room only. Any thermostat adjustment takes effect in every room—including the ones you’re not occupying. With zoning, you can ease up on the climate control (or turn it off completely) in parts of the home that aren’t in use. For instance, if you’re heading to bed, you can make your bedroom arctic cool or toasty warm, while setting an energy-conserving temperature everywhere else in the home.

With Fujitsu, it’s especially easy to capitalize on each and every chance to cut back, not least because you don’t even have to be at home to do so. FGLair, a free downloadable app for smartphone or tablet, gives homeowners the power to access, monitor, and control RLS3Y- and RLS3HY-series Fujitsu systems at any time, from just about anywhere. If, for instance, your schedule is often in flux—if it just doesn’t make sense to program your system to run on a set schedule—you can control the temperature in your home remotely, with only a few taps on the screen of your favorite mobile device. Basically, you’re in complete control.

The streamlined simplicity of the Fujitsu solution starts with the system itself—its design and components—and extends to its mode of operation. Case in point: Under normal circumstances, with traditional equipment, achieving year-round comfort would require the installation of two independent systems, one for heating, anchored by a furnace, and the other for cooling, powered by an outdoor compressor. Fujitsu, however, unites both functions into a single system—that is, Fujitsu ductless technology delivers both cooling and heating. Ready to switch from cooling to heating, or heating to cooling? Just push a button. That’s really it. See? Simple.

Already widely popular in Europe and Asia, ductless climate control has been steadily gaining traction in the United States, little by little, as awareness spreads. After all, most people don’t think twice about their HVAC and accept the limitations of an inefficient, one-zone setup. But that may change in the future, as rising energy costs, the stress of unending thermostat wars, or both finally motivate homeowners to seek out alternatives. When it comes to cooling and heating, we’re living in a new world, where options like those from Fujitsu push the limits of versatility, energy efficiency, and customized control. It’s just that not everyone realizes it—not yet, anyway.

Home Zoning: The End to All Your Thermostat Wars

How To Install a Thermostat