The chimney might not be a part of your home you consider very often, but keeping it in good working order is a critical part of ensuring a safe and healthy home. 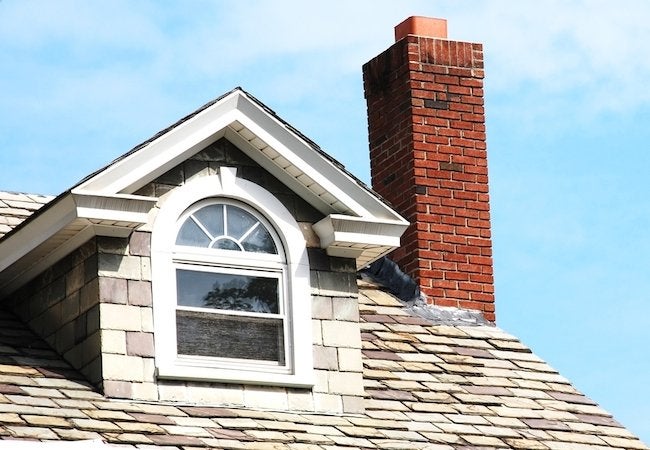 Why would Kris Kringle choose to squeeze his considerable girth through one of the narrowest and most soot-covered passageways in the home? The answer: Who the heck knows? One thing is certain, however. For those homeowners with a fireplace, safe and hassle-free evenings spent around the hearth depend not only on a proper understanding of how a chimney works, but also on a commitment to maintaining the chimney.

Whether traditional or prefabricated, all chimneys are fitted with a damper—that is, a moveable metal plate. When open, the damper allows smoke from the fireplace (along with heat and harmful gases, such as carbon monoxide) to exit the house. During the summer or on cold winter nights when you are not using the fireplace, the damper closes in order to help maintain a comfortable indoor temperature.

A standard throat damper installs above the firebox and is operated by a handle, while a top-sealing damper mounts at the top of the flue. The latter opens and closes by means of a stainless steel chain, extending down the chimney. When closed, the top-sealing damper serves double duty, not only keeping in heated air, but also keeping out animals, loose debris (e.g., leaves), and precipitation.

Rising heat creates an air current that carries heat, smoke, and toxic gases with it along an upward trajectory. Known as drafting, this fundamental principle of convection prevents your house from filling with smoke and hazardous exhaust. Larger flues create stronger drafts, generally speaking, but in any case, eliminating creosote deposits and other clogs ultimately safeguards against chimney problems.

Mandatory in some states, flue liners enhance the safety and performance level of chimneys in a couple of ways. One, they prevent the overheating of combustibles adjacent to the chimney. Two, they make the chimney more resistant to the corrosion typically brought about by byproducts of burning wood.

There are three main types of flue liners:

Without regular cleaning, a highly flammable substance known as creosote may build up within the flue, making the chimney vulnerable to high-heat fires. Burning at temperatures around 2,000°F, chimney fires are capable of extending beyond the chimney itself and into other, more flammable parts of the home. Though prefabricated chimneys are built to withstand very high temperatures, they can be so damaged by chimney fires that replacement becomes necessary.

Keeping the chimney clean prevents house fires. For that reason, if you frequently make use of the fireplace in your home, it’s highly recommended that you employ a certified chimney sweep on an annual basis. Many homeowners remember to make an appointment when turning the clock back during mid-autumn.

Everything You Need to Know About Hiring for Chimney Cleaning
Advertisement

14 Ways to Cut Costs in Every Corner of Your Home