5 Solutions for Stairs That Squeak

Do your stairs creak with every climb? Whether they're wooden or carpeted, you can silence the noisy steps in the home with one of these simple methods. 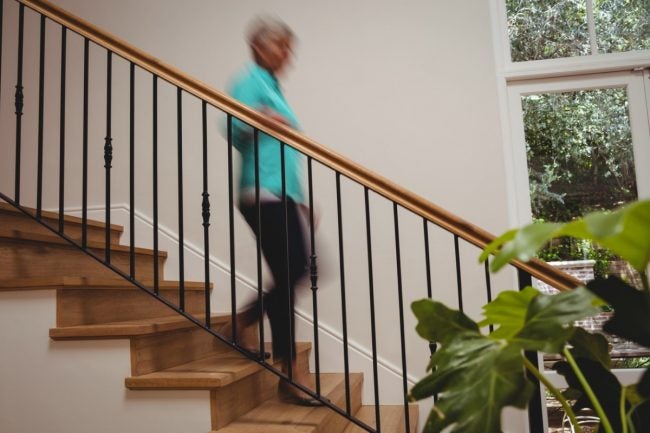 You’ve seen it—and heard it—in so many scary movies: a stair creaks in the night, startling the homeowner into nervous wakefulness. But in reality, creaky stairs are a common and usually merely annoying problem. The basic cause is generally wear-and-tear on the wooden staircase components causing one wooden section to rub against another or against a metal nail or screw. And while the resulting noise might be a way to keep track of your teen’s comings and goings, or discourage you from that midnight trip down to the kitchen for a snack, it’s best to fix the creak before it gets worse.

Most reasonably handy folks can tackle a squeaking stair on their own. Before getting started, however, it helps to know the correct terminology for staircase components.

Now that you know the lingo, locate the site of the squeak. First, slowly walk up and down the staircase, taking note of any squeaky steps. Mark the culprits with a piece of tape or a sticky note. Next, stand in the center of each noisy step. Gently rock from side to side and then forwards and backwards. Try and determine whether the squeak is coming from the back, the side, or the front of the tread, as this helps pinpoint the likely problem. As a rough rule of thumb, squeaks from the front of the tread indicate it has come loose from its riser, while a squeak from the back or the side of the tread means it’s loose at the stringer.

Once you’ve determined the site of the squeak, consider these five ways to stop it–or at least quiet it down.

METHOD 1: Dampen the squeak with lubricant.

One of the easiest ways to muffle a creak coming from the back or sides of the tread is by filling the crack between the tread and the riser above it with a lubricant like powdered graphite or talcum powder. (Don’t use an oil-based product, which can warp wood, turn sticky with dust, or leave things slippery if overused.) Wedge a piece of paper against the back of the tread, pour a little powder onto the paper across the entire width of the stair, and then use your finger, a tightly twisted piece of cloth, or a stiff paintbrush to work the powder as deeply as possible into the crack between the tread and the riser. While this won’t actually stop the two wooden pieces from rubbing together, the powder removes friction, thus stopping the noise.

METHOD 2: Screw down the treads.

If your stair is squeaking at the front, tighten up the fitting between the tread and the riser with a few screws; #8 screws are a good size for this purpose and easily found at any home improvement center. Start by drilling three evenly spaced pilot holes across the front of the tread where it lines up with its riser. Then drill in the three screws, making sure to sink them slightly below the surface of the tread. Leaving a screw sticking up from the tread is a sure way to injure someone’s bare foot. Once the screws are in place, use a bit of appropriately colored wood filler to hide the screws and fill in the slight indentations.

METHOD 3: Nail into the risers.

If the squeak issues from the back or the side of the tread, and you want a more permanent solution than a lubricant, nail the tread firmly into its stringer using 8d or 10d nails (which are 2½ to 3 inches in length). Start by making two small pilot holes on the side of the tread near the wall; they should be spaced about two inches apart from each other and be drilled at opposing 45-degree angles so that the nails you insert next are aimed away from each other. Repeat to create two more small pilot holes on the side of the tread near the balustrade. Next, drive your nails into the pilot holes, directing the nails at a 45-degree angle as described. This tightens the tread to the stringer and, by creating a slight clamp, the nails won’t easily be pulled back out over time. Be sure the heads of the nails don’t poke up above the surface of the wood where they could injure someone’s foot; a few extra taps of the hammer should flatten them out. If desired, cover the repaired spots with a dab of wood filler or putty to hide them.

METHOD 4: Fix creaky stairs from underneath.

Many interior staircases don’t allow easy access to the area underneath the stairs, but if yours does, you can silence squeaks from there for the sturdiest results. You’ll need three small triangular wooden wedges known as glue blocks for each squeaky step. If you can’t find premade glue blocks at your local home improvement store, make them yourself by taking a two-inch wooden cube and cutting it in half across the diagonal to create two equal triangular pieces. Apply wood glue to the two shorter sides of each glue block, and then firmly press the blocks into the right angle created by the meeting of the riser and the tread. Position one block in the center of the step and the other two at the opposite edges of the step. Give each glue block a slight wiggle as you position it to push out any air bubbles.

METHOD 5: Get a special tool for silencing the squeak on carpeted stairs.

Unless you plan on replacing the carpeting anyway, you’ll probably want to avoid removing it to repair a squeaky stair. However, driving screws through carpeting can rip carpet fibers, catch the drill bit, or make holes in the carpet, so to get the job done, you’ll want a drill tool specifically made for this purpose, such as the Squeak No More Kit available on Amazon.

Use the kit to drill three screws into the front of the tread where it joins the riser, as in Method 2 above. But with the carpet drill kit, you’ll first position the included tripod device over the spot where you want to install the screw, and then insert the kit’s drill bit into your drill. Position one of the special screws in the end of the bit, and then drive the screw through the carpet and down into the tread and riser. The head of the screw will still be sticking out of the carpet when you finish, but using the tripod, you’ll simply snap off the head of the screw, leaving the remainder safely hidden beneath the carpet where it can’t hurt your feet. Ingenious!

Solved! Who Do You Hire to Fix Squeaky Floors?
Advertisement

The Next Level: 14 Stair Railings to Elevate Your Home Design

9 Sneaky Ways to Get New Floors for Under $50

11 Cheap Cures for a Cluttered Kitchen