5 Recipes for a Homemade Rust Remover

What do ketchup, lemons, vinegar, potatoes, and cream of tartar have in common? They’re all excellent—and natural—solutions for removing rust. Read on to learn how these pantry staples can restore your metal pieces to their original shine. 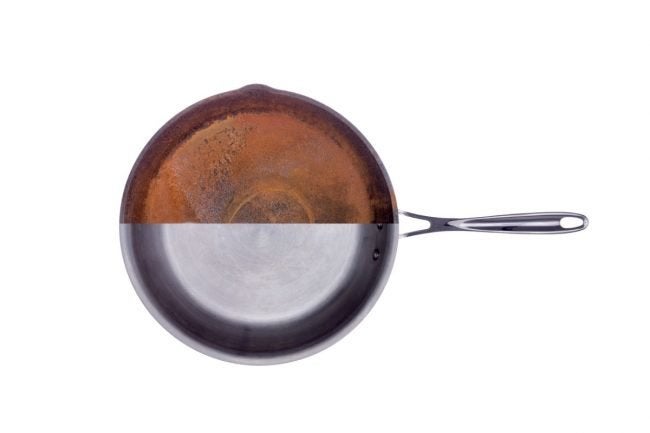 Few things are more unsightly than a sudden smattering of rust spots plaguing your smooth metal surfaces. Whether on a garden tool or the kitchen sink, that dreaded orange color tends to age your favorite belongings, making them appear old and dirty even when they aren’t. While you can’t always prevent this common, moisture-caused chemical reaction from occurring, you can get rid of rust—and naturally—with a handful of methods.

As you’ll see, most of these feature ingredients that come straight from the pantry! Try one of these homemade rust remover recipes to get your metal items looking shiny and new once again.

1. Use limes, lemons, and salt to scrub away rust.

Believe it or not, a little green lime and its larger yellow cousin—the lemon—can help eliminate rust in its early stages before it reaches the interior metal. Combined with the abrasive benefits of salt, the acidic properties of the citrus fruit make for an effective scrub (and a great margarita!). Start by coating the affected area with a sprinkling of salt. Then, squeeze the juice over the salty surface. After letting the mixture sit for two to three hours, use the rind to rub off the residue and reveal a rust-free result. Finish up by rinsing and drying the piece completely.

2. Rub down rusted pieces with a raw potato (skinned) and salt.

Do you have some spare spuds lying around? It turns out that peeled raw potatoes contain oxalic acid, making them a natural homemade rust remover. Simply cut the potato in half, cover the smooth surface with either salt or baking soda, and rub it against your rusty objects. This works particularly well for kitchen utensils. (Note: If you’re looking for how to get rid of rust on knives, in particular, you can even just stick the tarnished knife into a potato and let it sit for several hours.) All that’s left to do is run the metal object under water, and it should be good as new!

RELATED: 12 Smart Dish Washing Hacks No One Ever Taught You

3. Break down a rust stain with washing soda and ketchup, then wipe away.

For this homemade rust remover, you’ll need to reach into the fridge and grab a popular hot dog topper: ketchup. Mixed with washing soda, this condiment can work wonders, returning your metal items back to their former gleaming glory. To create the concoction, put water and washing soda in a spray bottle, and shake the bottle vigorously. Saturate the orange spots with the mixture, then top with some ketchup to get rid of the rust. Allow the items to sit for two hours before you rinse with water and wipe dry.

4. Create a paste from tartar, baking soda, and hydrogen peroxide for rust treatment.

If you enjoy making desserts, you probably have cream of tartar in the pantry. But did you know this baking essential also serves as a homemade rust remover when combined with a few other pantry items? Simply put cream of tartar in a bowl with equal parts baking soda, then incorporate a little hydrogen peroxide at a time until you achieve a paste-like consistency. Rub this mixture over the rusty object, let it sit for an hour, then wash it in the sink. Voilà!

Individually, vinegar, baking soda, and salt all make wonderful cleaning agents, but together, they form an extremely effective homemade rust remover. While this process may take a little longer than the others to get rid of rust completely, it’s ideal for cleaning a collection of items, such as a full set of kitchen utensils. You can set up your rust-busting station, and let it work on its own for a half-day while you move on to other chores.

RELATED: 21 Timesaving Tricks That May Change the Way You Clean

Start by adding ½ cup salt to ½ gallon vinegar in a plastic container. Drop your rusty extras into the solution, and let them soak for about 12 hours. Next, pour out the salt-and-vinegar solution, rinse off the metal objects, and then immediately return them to the container. Now fill with ½ gallon fresh water and ½ cup baking soda to neutralize any remaining vinegar trapped inside the crevices. After about 10 minutes, rinse the items in warm water, and finish by drying them thoroughly.

How To: Remove Moss from the Roof

How To: Remove Rust from Chrome

How to Remove Soap Scum From Tubs and Showers

How To Prevent Rust on Your Outdoor Furniture and Railings

How To: Remove Concrete Stains