So, You Want to… Remove a Load-Bearing Wall

Get up to speed on some of the considerations, caveats, and planning involved with the decision to remove a load-bearing wall. 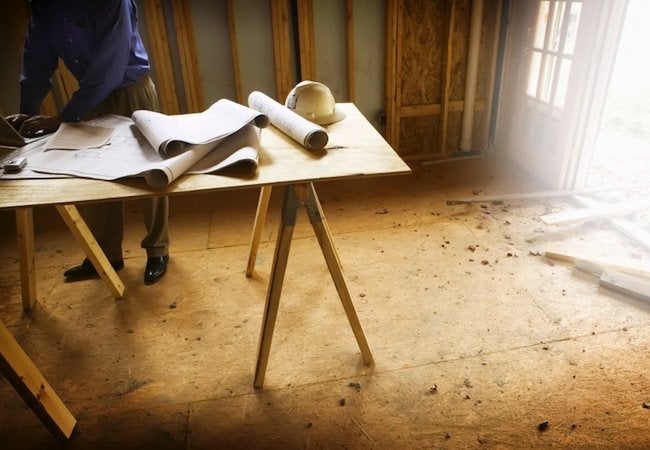 In the old days, homes were built with a warren of smaller, sharply delineated rooms, each devoted to its own distinct purpose. Homeowners today often prefer open, fluid floor plans, at least on the ground level. For that reason, many renovations call for the removal of a wall, be it shear or load-bearing. No question, shear walls are a lot easier to knock down. Provided you take the necessary safety precautions and follow local building regulations, you might even be able to do it yourself.

That’s definitely not the case with a loading-bearing wall. For a successful result, you must work with a reliable contractor, structural engineer, or both.

There are two common approaches. Both rely on the addition of a bearing beam to take on the load that had been absorbed by the wall being removed.

The two approaches differ when it comes to the handling of the beam itself. The less ambitious and less expensive method involves leaving the beam exposed. You can paint the beam or box it in, but the discerning eye will probably notice it’s there.

More complicated, labor-intensive, and expensive is to conceal the beam so that it runs between, not beneath, the ceiling joists. This approach leaves behind no visible sign that the load-bearing wall has been removed, only a flat, smooth ceiling.

Because it affects the structural integrity of your home, removing a load-bearing wall isn’t a casual undertaking by any stretch of the imagination. But for professionals in the building and remodeling industry, it’s more or less routine.

That said, because every home features its own set of idiosyncrasies, strategies vary. Well before work begins, contractors and/or engineers have to confront a number of questions, chief among them: What type of beam should be employed? Each has its own pros and cons.

Are vertical supports necessary to support the new beam? That depends on the length and type of beam, the existing framing, and a host of other factors. An engineer would perform a series of load calculations to arrive at a recommendation, which might call for vertical supports on their own, or possibly entail additional concrete footings at foundation level. A general rule of thumb: The larger the load-bearing wall, the more complex its removal, particularly if the goal is to create sweeping, open space interrupted as little as possible by visible structural elements.

If planning plays a critical role in removing a load-bearing wall, so does prep work. The most visible, dramatic changes take place at a relatively late stage, but a much more modest yet absolutely essential effort goes on at the start—bracing. Here, contractors carefully prop up the ceiling joists on both sides of the work area, using temporary support beams in combination with adjustable jacks. Once set, the bracing more or less prevents the building from collapsing when the bearing wall comes down. The demolition? That’s easy. It’s everything else that’s hard.

So, You Want to... Knock Down a Wall
Advertisement

How To: Identify a Bearing Wall