Peat Moss vs. Coco Coir: What’s the Difference Between These Go-To Gardening Supplies?

When choosing a growing medium, are you pro-peat or hardcore coir? Both types of soilless mixes have their benefits and drawbacks. 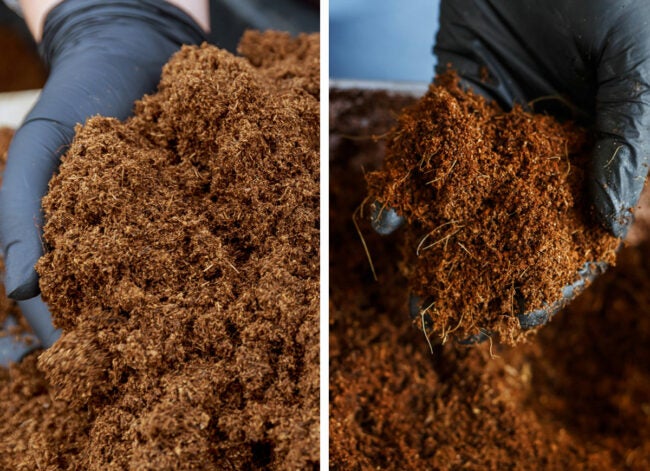 Peat moss has long been a primary ingredient in seed starting and potting mixes, as well as a popular amendment to garden soil to lighten it and increase its moisture-retaining capabilities. However, peat is harvested from bogs that contain almost a third of the world’s carbon. Therefore, the continued strip-mining of peat moss may release that carbon into the atmosphere, contributing to the effects of climate change.

Although coconut coir makes a fairly good substitute for peat, it has its own environmental issues. So, the debate shouldn’t just come down to sphagnum peat moss versus coco coir. There are other alternatives, such as compost, but it’s still worth comparing the two.

What is peat moss?

Peat moss forms when sphagnum moss breaks down in bogs over hundreds of years. Most peat bogs are located in the northernmost areas of the world. Russia and Canada are two of the largest producers of peat, with the majority of U.S. peat supply coming from Canada.

Fully decomposed peat is dark in color with little trace of plant materials remaining in it. (The still-green surface moss is sometimes harvested for use as a hanging basket liner, orchid planting media, and more.) After a bog is drained, the peat is harrowed and allowed to dry before being vacuumed, screened, and pressed into bales.

What is coco coir?

Coco coir comes from the husks of coconuts, which are removed before the fruit is sold. After the husks have been softened by soaking, the coconut fiber is separated from the pith and used in the manufacture of floor mats, brushes, and hanging basket liners.

The pith is then leached with fresh water to cleanse it of some of the sodium, chloride, and potassium salts it contains. After being ground and dried, the pith is sieved and bagged or compressed into blocks or tablets—which later can be rehydrated—for use as a growing medium.

When completely dry, peat moss can be hard to moisten again without the use of a wetting agent, due to its waxy cuticle that shrugs off water. Coir doesn’t have that repellant layer, so it soaks up moisture more easily. However, its surface dries out more quickly than peat surface does, which could be problematic for starting fine seeds, which often are simply pressed into the medium surface.

A lack of surface moisture could also fool a gardener into thinking a houseplant needs watering when its mix actually remains damp underneath. However, that drier surface does help prevent damping off and fungus gnat infestations.

According to the University of Arkansas, both media retain water well, with peat moss “holding 60 to 68 percent of its volume in water” and coconut coir retaining 73 percent to 80 percent, “which is slightly higher than a typical sphagnum peat.”

Peat moss tends to be more acidic than coco coir.

Peat moss is often very acidic, with a pH balance ranging between 3.0 and 4.5. Because of this, manufacturers usually add limestone to it before sale to raise its pH to a point that’s acceptable for most plants. A couple of rarer types of peat have higher pH levels. The hypnum type from hypnum moss varies from 5.0 to 6.5, and the reed type from reeds and sedges runs from 5.0 to 5.5, so those types of peat might not require limestone.

Coco coir is “sweetest,” with a pH between 5.8 and 6.9, so it generally doesn’t require the addition of limestone to raise its pH either. However, in some cases, its pH is high enough that repeated waterings with hard water could raise it to harmful levels for many plants.

A hydroponics experiment by Utah State University found that plants grown in peat had a higher chlorophyll content and appeared greener and larger than those raised in coir. According to that study, “Electrical conductivity, a measure of the soluble salts in a solution, can reduce plant water potential and thus plant growth. The EC of both the coir/perlite mixes was significantly higher than the peat/perlite mix.” Coir has reportedly improved since that 2005 study, with some producers emphasizing their attention to electrical conductivity.

Coir takes longer to decompose than peat and can even be reconditioned and reused.

Due to its texture, coir doesn’t pull away from the sides of containers when dry like peat moss can, so it’s more likely to catch all the water that flows through. Coir also is less likely to shrink due to decomposition, since it takes longer to break down than peat does.

That won’t be a good thing if the coir ends up in a landfill, however. It’s best to reuse coco coir if you can, though that will require your removing old debris from it and perhaps sanitizing it if you intend to use it for seed starting or rooting stem cuttings.

Related: The Best Soil for Orchids

Plants in peat moss may mature slightly faster than those in coir.

A 1996 University of Florida experiment with tomatoes and peppers found that tomatoes grown in a peat transplant mix “attained maturity more quickly,” meaning they produced red fruits sooner than those raised in coir. This difference between coco coir and peat moss apparently wasn’t due to the plants’ size, since the coir-grown plants grew slightly larger.

The earlier maturity advantage did not apply to the peppers, however. And, since the difference in tomatoes was only 12 percent, the study concluded that coir is an acceptable alternative to peat for vegetable growing.

Which is more sustainable? The jury is still out.

Because coconut coir makes use of a oft-discarded substance, it might seem to be more sustainable and environmentally friendly than peat moss. However, processing coir uses large amounts of water and could contribute to the waterway pollution in countries where it’s processed. Also, it usually must be shipped overseas to the U.S., which requires fuel and adds to global carbon emissions.

While harvesting peat also releases carbon, 1.3 million tons of peat are harvested annually as compared to the 70 million tons of peat that is reportedly made annually. This means the global peat moss supply seems to be renewing itself, which could hopefully continue to hold some carbon from releasing into the atmosphere.

Can you mix peat moss and coco coir as a compromise? Yes, and some companies (like Pro-Mix) are already offering just that. A coco-and-moss combination like this option available at Amazon might just be the solution needed to limit some of the problems presented by both media while combining their advantages.

The Best Soil for Pothos Plants of 2022
Advertisement

The Best Soil for Strawberries of 2022

The Best Soil for Raised Beds of 2022

The Best Soil for Fiddle Leaf Figs of 2022