Frost Coming Your Way? What to Do With Veggies in the Garden

Vegetable gardening is all about the harvest, which can become a race against the calendar. When Mother Nature threatens frost, know which bounty to harvest early and what to do with it. 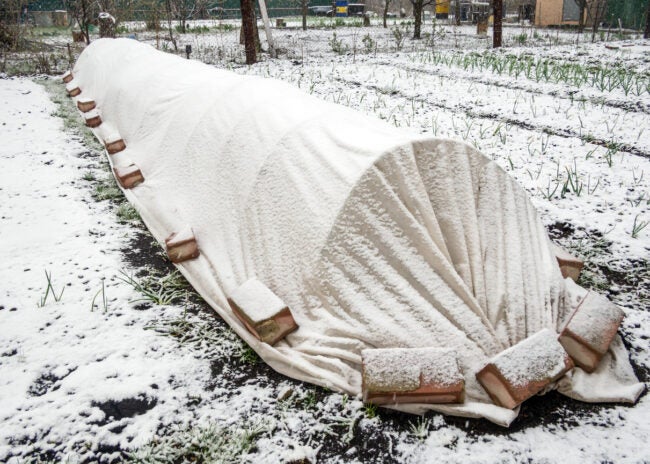 While some people welcome the cooling that accompanies autumn, gardeners know they have work to do before the coming frost kills off the literal fruits (and veggies) of their labor.

First, find out the typical frost dates for your area and learn what temperatures cause frost damage. Then, watch local weather forecasts. Understand the difference between frost and light freeze—and which plants are more susceptible to frost damage.

Start with healthy plants and the right soil. Next, you’ll need to know which plants are tender and which can withstand a light frost and which delicious homegrown fruits and vegetables you’ll need to harvest before it’s too late.

RELATED: 10 Ways to Weather-Proof Your Garden

Hardy plants generally have higher levels of sugar in their leaves, which enables them to tolerate lower temperatures. Cool-season crops that can survive a frost or even an early freeze include asparagus, cabbage, kale, spinach, broccoli, Brussels sprouts, collards, potatoes, and onions.

RELATED: Hardiness Zones 101: What All Home Gardeners Need to Know

Gardeners can save many crops from an early frost. Even cool-season crops like lettuce and other leafy greens, carrots, and radishes can benefit from overnight covering to protect them from frost and extend the growing season. You can use old sheets or drop cloths (using supports to keep the cover from touching the plants), burlap, row covers made of non-woven polyester, or cloches.

Whatever type of cover you choose, make it breathable. Do not use plastic. Ensure air circulation and be sure to remove the covers during the heat of the day, reapplying in the early evening.

Adding a 2- to 4-inch layer of mulch, particularly in the afternoon while the soil is warm, can help protect roots from overnight dips in temperature. Material choices to minimize frost damage include wood chips, bark, pine needles, straw, and even shredded leaves (including if they’re moldy). Dark mulch absorbs more of the sun’s warmth, which it releases into the soil around the plants at night.

Mulch also preserves much-needed moisture. In addition, a layer of mulch will prevent perennials from putting out new growth at the end of the season, allowing them to go dormant for the winter.

RELATED: The Dos and Don’ts of Mulching the Garden

Moist soil actually holds up to four times more heat than dry soil, and conducts that heat to the soil surface faster, creating a microclimate in which the air above it is five degrees warmer. In addition to providing an insulating effect, water strengthens plants and enables them to withstand temperature changes better.

For best results, water late in the day because the water vapor creates a microclimate that will help plants stay warm and resist freezing.

When all else fails, harvest what you can. Beans, peas, corn, melons, cucumbers, eggplant, and most greens should be harvested early, since they don’t handle frost well. Be sure to pick tender herbs such as basil and oregano.

Tomatoes and peppers can ripen indoors after harvest. In fact, many fruits, including apples, peaches, pears, grapes, cantaloupe, and persimmon, ripen after picking. Store pumpkins and squash in a dry location for later use.

It can be tough to eat all of the last harvest right away, but there are plenty of tips on preserving your harvest, such as drying herbs, and canning, drying, or freezing fruit and vegetables.

RELATED: 12 Perennial Vegetables to Plant for Years of Fresh Produce

Many fruits can ripen indoors more quickly if placed in a paper bag that is loosely closed at the top. This traps ethylene gas that helps ripen fruit. Because rice also traps ethylene gas, fruits can be placed in containers of rice, although this is not recommended for tender fruits such as peaches that can suffer bruising. Taking these steps can typically help fruit to ripen within a few days.

Plastic bags are not advised for ripening fruit because they don’t “breathe.”

Not all produce has to be harvested at the first sign of frost. Many root vegetables, like beets, carrots, onions, turnips, parsnips, and potatoes can easily survive a light frost. So can kale, artichokes, broccoli, cabbage, radishes, leeks, spinach, Brussels sprouts, and chard. In fact, cold temperatures improve the flavor of some crops such as carrots and kale.

If frost attacks your fruits and vegetables, they may not be edible, or at least, desirable to eat. Tender plants like peppers, tomatoes, and many fruits may be mushy. Lettuces and other greens often turn dark and limp. Beans, eggplant, and potatoes are also susceptible to frost, and may exhibit crystalized moisture in their cells. Even carrots can become rubbery or limp after a hard frost.

If the produce is past its prime, dispose of it in your compost pile or bin, where it can help benefit next year’s garden.

How to Grow Asparagus
Advertisement

11 Plants You Should Never Start Indoors

What Kind of Gardener Are You?

The 12 Hottest Houseplants for Your Home Office, According to the...