Rattan vs. Wicker: What’s the Difference?

Rattan and wicker furnishings can give your home’s decor a modern, natural vibe. Before you rush out and buy some on-trend pieces, first learn what these two terms really mean. 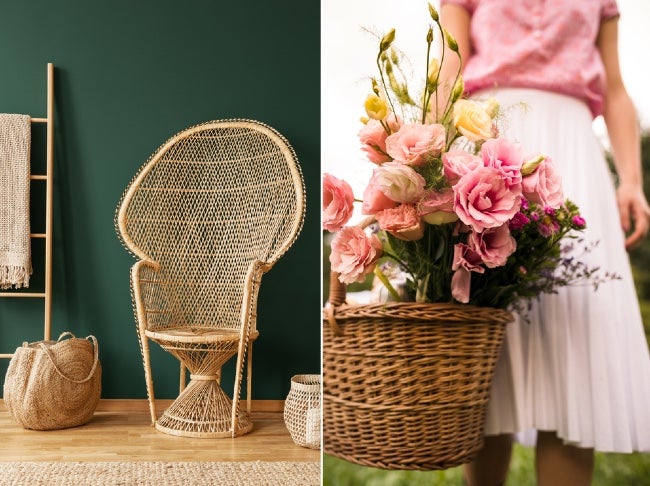 Natural, woven furniture may conjure up visions of 1970s decor but believe it or not, this look is back in a big way. For the past couple of years, wicker baskets, rattan furniture, and cane webbing have been front and center among home decor trends. Though rattan and wicker are experiencing a surge in popularity, there’s still a lot of confusion about the difference between them. In fact, in the United States, the two words are often used interchangeably, which makes discerning between them even more difficult.

Don’t worry—we’re here to clear this issue up once and for all and help you make an informed decision while shopping for indoor and outdoor furnishings. Here are five facts that will help you remember the differences between rattan and wicker.

Wicker is a style of weave, while rattan is a material.

One of one of the biggest misconceptions about rattan and wicker is that they are both materials. That’s only half true: Rattan is, in fact, a material that is derived from some species of palms. Wicker, on the other hand, is a style of weave. While wicker pieces may be made from rattan, they can also be woven from a number of other natural and synthetic materials, including bamboo, reed, and synthetic resin. Over time, the term “wicker” has come to encompass many types of woven furniture.

There are more than 600 different species of rattan found throughout Australia, Asia, and Africa.

Rattan is a general term used to describe a wide variety of Old World climbing palms. Most of the rattan in the world is found in Indonesia, though it’s also common in the rest of South Asia and Southeast Asia. Rattan is a liana, a wood-like vine with flexible stems. It looks like bamboo but it is solid, while bamboo is hollow in the middle. Like wood, rattan can be painted or stained, which has made it a go-to material for making furniture and other home goods. Historically, rattan has also been used for making sports equipment, weaponry, wicks for essential oils, and homes in the rural areas where it grows. Primarily, however, it’s used for wickerwork.

Wicker is an ancient weaving technique that became popular after rattan was imported to Europe.

Wicker is a weaving technique that dates back to ancient Egypt—in fact, wickerwork items have been found in Pharaohs’ tombs. Reeds and swamp grasses were traditionally used in wicker weaves. Over the centuries, wicker became more and more popular and exploded in Europe during the Age of Exploration when rattan began to be imported from Asia. Because rattan is more durable than many of the other materials previously used in the region, it quickly became the material of choice for wickerwork. In contemporary times, wicker became popular again during the Arts and Crafts movement and is emblematic of the style today. Today, wickerwork is made using natural materials like willow, rattan, reed, and bamboo, as well as synthetic fibers like vinyl and resin.

Cane is part of the rattan plant and is often woven into webbing.

While rattan furnishings are generally made using the core of the rattan vine, cane is derived by peeling off the outer skin. It is typically woven into webbing and used as a decorative finish for wood furniture. Cane is flexible yet durable, which has made it popular for crafting chair seats. Due to its open weave, cane webbing is also often used for creating ornamental accents on cabinet doors and headboards. Rattan is porous and easily damaged by moisture, but cane is water repellent and can be wiped of spills without causing any damage.

Natural rattan furnishings are meant for indoor use, while synthetic wicker can withstand the outdoors.

8 Things You Never See on the Dining Table Anymore
Advertisement

How Big-Box Home Stores Get You to Spend More