Ostensibly, a home’s front door is there for one reason and one reason only: to let people come and go while keeping the inside environment secure and separate from the outside. But a fro...

How To: Replace a Toilet


There are many reasons to replace a toilet. Maybe it’s old or avocado green. Or maybe it rocks more than the Red Hot Chili Peppers when you sit on it. Or perhaps it uses more gallons per ... 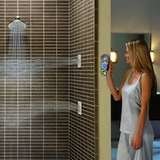 How To: Fix a Running Toilet

How To: Repair a Leaky Faucet


The faucet—whether it's in the kitchen, bathroom, or behind the bar—acts like a mini dam, holding back a pressurized stream of water until you lift or twist the handle. According to the N...