Harnessing the sun's energy to power homes is a viable and increasingly cost-effective option for homeowners. 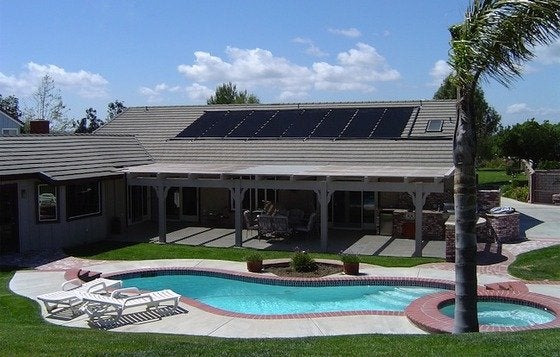 Solar energy can be used to do all sorts of work around the house, from providing electricity for lights and appliances to warming a pool, spa, shower or room. But how well a solar system works for you will depend upon dozens of factors, including where you live, your exposure to the sun, your electric rate, what you pay for heating fuel, your budget and your commitment to drawing on the sun’s energy rather than your current providers.

The heart of any active solar system, regardless of whether it is providing electricity or heat, is the collector (sometimes called a panel or module). Passive systems rely on natural forces to operate, such as the movement of heat from cold to hot and the fact that hot fluids rise. Conversely, an active system requires other equipment, such as blowers, pumps, and inverters, to use the energy you capture from the sun.

COMMON TYPES OF COLLECTORS
There are essentially two types of solar collectors, electric (those converting the sun’s rays into electricity) and thermal (those that convert it to heat). Both are typically found on roofs, though the arrays may be ground- or pole-mounted as well.

Solar electric panels (sometimes referred to as PV or photovoltaic modules) are typically composed of solar cells—tile-sized silicone wafers, wired and assembled into a panel or module. They often have a blue or green cast but can be black as well. The most common types of residential solar electric collectors are:

• Crystalline PV modules  comprise the vast majority of solar electric collectors on the market. They are made by slicing manmade silicon crystal ingots, or loaves, into wafers, each carrying a positive and negative electron. Wafers are wired together to form modules and modules are wired together to form arrays. When the wafers are struck by sunlight, an electric current runs from the front contacts to the back contacts, distributing the charge from module to module.
Advertisement

Thin-film modules and laminates account for a small fraction of total solar module sales, however, partly due to the fact that they require up to four times more roof space to produce the same kW-hr/yr output. The residential application that has drawn the greatest interest for thin-film PV is on standing-seam metal roofs (between the vertical seams) and as solar shingles.

• Thermal flat-plate collectors, designed for heating, are typically 4″- to 5″-thick rectangular enclosures with glass covers on top. Inside the enclosure is a blackened absorber sheet with integral passages through which a liquid flows to draw away the sun’s heat. The heated liquid may then be used for domestic water or for space heating. Tubing travels through the collector enclosure, so it can be connected to additional collectors as well as to the supply and return mains. The liquid that circulates through the collector is usually water or antifreeze (glycol), or a combination of the two.

• Evacuated tube collectors, a newer type of thermal collector, is made from a row of evacuated tubes, each with its own absorber plate and tubing. Liquid removes heat from the absorber plate, just as it does with a conventional thermal collector. The use of evacuated-tube collectors has increased in recent years, but they still represent a small percent of today’s market.
Advertisement

• Hot air collectors tend to be larger than collectors that heat liquid, sometimes covering an entire exterior wall of a building. Consequently they are more often used in commercial applications. Some hot air collectors, also called ‘air-cooled’ collectors, are glazed. Such collectors are used for space heating. There’s not a lot that can go wrong with them, because freezing and overheating are not issues.

HOW SOLAR SYSTEMS WORK
Solar electric collectors convert solar radiation directly to electricity, which may be used immediately, stored in batteries, or sent to the electric grid. In the latter case, the homeowner receives credit for what is produced, thereby lowering his electric bill. In effect, the utility company serves as storage for electricity that’s produced during periods of the day when you don’t need it. The grid is also there as a backup for cloudy periods, when you aren’t producing much solar electricity.

Thermal collectors convert solar energy to heat. Radiation strikes the absorber plate, and heat is drawn away by liquid or air. Provisions must be made to deal with the overheating of liquid-cooled systems, when there is no demand for heat. If water is used, provisions for freezing must be made. The heat may be used immediately or stored for later use. In solar hot water heating systems, a tank stores the hot water. In the case of swimming pools, the pool acts as the storage tank.

In solar space heating, the heat may be stored in large tanks of water or in some type of masonry, including bins filled with stone. The heated air can be distributed to various rooms by ducts or pipes in much the same way as conventional heating systems.

BEST RETURN ON INVESTMENT
Various federal and state incentives may be available to homeowners wishing to install a solar system. You can find out what’s available in your area by going to the Database of State Incentives for Renewables & Efficiency (DSIRE).
Advertisement

In general, domestic hot water heating and swimming pool heating applications have the shortest paybacks (5 to 7 years) and require the smallest investments ($3,000 to $10,000 before incentives). Installations cost less in climates where freezing temperatures are not an issue. Solar electricity installations that would satisfy a significant portion of your electrical needs require much larger investments, although component costs have dropped in recent years. If done during construction, costs are significantly lower.

Leasing programs, if available in your area, also dramatically reduce the cost of installing a system. Solar space heating also requires a large investment, unless you simply want to warm up one or two rooms on the south side of your house.

Regardless of what type of solar system you’re contemplating, begin conserving energy now. It costs a lot less to turn off lights, take shorter showers, and insulate the attic and walls than it does to install an array of solar collectors!

Considering solar for your home?  Find a professional contractor in your area, here.

Author Note: In addition to being a frequent contributor to BobVila.com, Joe Provey is co-author, with Everett M. Barber, of Convert Your Home To Solar Energy (The Taunton Press, 2010)

The Greenest Cities in America

The Best Places in America for Off-Grid Living
Advertisement

10 Money-Saving Gadgets That Pay for Themselves

21 Money-Saving Tricks That Every Homeowner Needs to Know