The emergence of the Georgian House was a water-shed moment in the history of American domestic architecture. 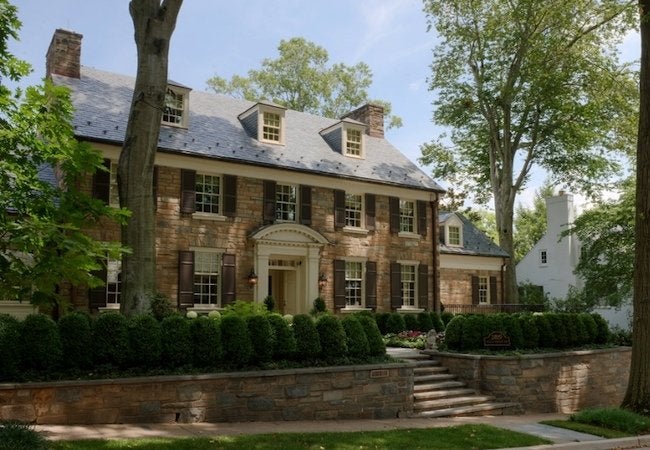 If the ups and downs of architectural history were to be represented by a line graph, there’d be a tall spike at the time the Georgian House came into existence.  It didn’t happen all at once, of course, but the emergence of the Georgian House was a water-shed moment in the history of American domestic architecture.

The floor plan of the Georgian House is actually two hall-and-parlor houses turned sideways and connected by a central hall.  The result is a two-room wide, two-room deep (double pile) house, with two chimneys, one on either side of the house.  The Georgian House is also a full two stories tall, an imposing presence on any street-scape with its broad facade that is also five openings (five bays) wide.  With this design, American builders transcended the humble Medieval origins of the Basic House and went upscale.  The name Georgian comes from the kings who held the English throne for more than a century starting in 1714.  Georgian Houses are commonly found in old trading towns along the eastern seaboard, early inland villages, and on southern plantations.

Once again, the inspiration came from Europe. But this time the line of trans­mission reaches back to classical antiquity. The front door assumed new promi­nence, sometimes with a front portico supported by columns. Flattened columns or pilasters became standard on each side of the front door and on the corners of the building. The projecting cornice line of the roof was elaborated with moldings. The sources for such detailing were the monuments of ancient Rome and Renaissance architects like Andrea Palladio, the great sixteenth-century Italian designer who had established the appropriateness of using elements from the temples of antiquity on domestic architecture. His Palladian window often appears in Georgian Houses, with its arched central opening flanked by two flat-topped windows.

If plainness was the most obvious characteristic of the Cape and other early houses, in the Georgian House the keynote became stylishness. Most of the early settlers in America had been poor and all of them had been concerned with shelter first and style later. Only after they could be assured of surviving in the North American wilderness did they shift their attention to elegance and decorative detail. In that sense, the Georgian House was an expression of the advance of American civilization.

The open central hallway meant there was space for a generous staircase which quickly became a design statement, an opportunity for the householder to proclaim his wealth and status. The ceilings in Georgian houses are taller, the rooms decorated with bolder moldings. Window technology had advanced, and the double- hung sash window became standard in the Georgian house. Georgian houses were symmetrical to a fault—many of the great surviving Georgian houses have false inte rior doors to maintain the illusion that each room was carefully balanced.

REMODELER’S NOTES:
One key precept to follow is Respect the symmetry of the house. That’s especially true on the facade where even a small change can scar the appearance of the house.

Cherish and, if necessary, restore the front entrance. Carpenter books of the time referred to the doorway as the “frontispiece” of the house and indeed it is. All of the details are important: the pilasters, the decorative cornice, a fan sash over the door if there is one, and even the door itself. Entrance ways are the hallmarks of the Georgian House.

As with any house of a certain age, a key guideline is to save the good old work. In a Georgian House, this may include six-panel doors, multipaned windows (12/12s in the north were usual, 9/9s in the south), raised paneling, the staircase, early flooring, and other details.