How to Grow Azaleas

Are your azaleas looking zapped? If they are less than happy, remember their aversion to scalding sun and sweet soils. 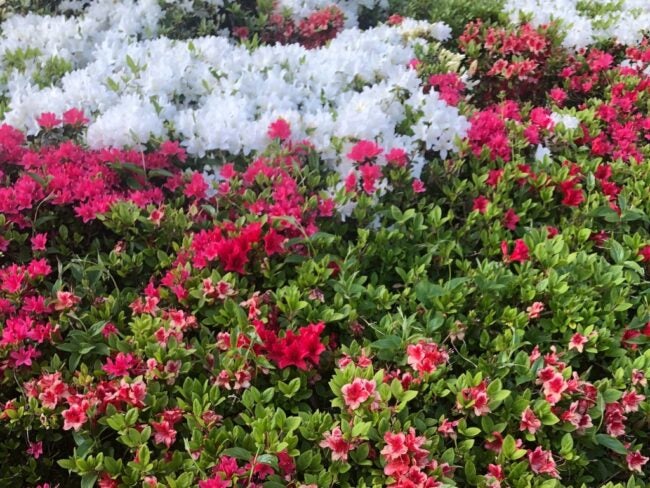 Did you know that azaleas actually are rhododendrons? As “The Plant Book,” edited by Susan Page and Margaret Olds, notes, “There are three main categories of rhododendrons, namely: azaleas (deciduous and evergreen); tropical or vireya rhododendrons; and the temperate climate plants we might call ‘true rhododendrons.’” The leaves of azalea bushes might be narrower than the often large and leathery foliage of a “real” rhododendron bush. However, like “rhodies,” azaleas trumpet their virtues with showy, often horn-shaped, blooms that appear in spring or early summer with a repeat performance in autumn for Encore types.

Although rhododendron care is similar, this article will deal with azalea care specifically, so continue reading to learn everything you need to know about how to grow azaleas.

RELATED: 11 Perennials to Plant in the Fall for Beautiful Spring Flowers

Growing Azaleas at a Glance

According to the Azalea Society of America, azaleas can vary in height from a 1-foot dwarf cultivar to a 10-foot azalea tree. They come in both deciduous and evergreen varieties, with the latter generally being smaller in size. Even those aren’t entirely evergreen, however, since they will drop their spring foliage in autumn but hold onto their more leathery summer leaves over winter.

Deciduous azaleas often can be grown in full sun in the North, where they’ll appropriately run toward sunnier hues such as yellow and orange, while evergreen types generally won’t tolerate that much light. Deciduous varieties also tend to be hardier than the evergreens. Azalea flowers, occasionally fragrant, vary in diameter from 1/4 inch to 5 inches and are available in almost every shade except true blue. Consider planting endangered types like the flame azalea.

When planting azaleas, keep in mind that their fine, shallow roots won’t deal well with rocky or compacted soils.

When is the best time to plant azaleas?

Plant your azaleas in late spring or early autumn. If your soil is very heavy clay, build an 8-inch to 1-foot tall raised bed on top of it, filled with two parts ground pine bark or oak leaf compost combined with one part coarse sand and one part garden soil.

Where can azaleas grow?

Choose a location for your azalea garden that has well-draining soil with a pH between 4.5 and 6 and that is protected from south and west winds by buildings or other plants. The site should receive only bright shade, dappled sun, or morning sun. Avoid planting azaleas near cement, which raises soil pH, or at the wind-whipped corners of buildings.

How do you plant azaleas?

The depth at which you plant your azalea should depend on the type of soil you have. Follow these instructions when planting azaleas:

Can you grow azaleas in containers?

Due to their shallow root systems, azaleas grow well in containers and often are sold as potted gift plants—especially around Easter. Keep in mind, though, that “florist” azalea types generally descend from Rhododendron simsii, which only will be hardy in USDA zones 8 through 11. If transplanted into the garden in lower zones, they aren’t likely to survive.

They can be difficult houseplants, but aren’t impossible to grow indoors if you keep azaleas’ preferences in mind. See “Preparing Azaleas for Winter” below.

RELATED: 9 of the Best Shrubs for Any Garden

Azaleas should receive at least an inch of rainwater per week or its equivalent, preferably via soaker hose or drip irrigation. While you should never allow the plants’ root balls to dry out completely, mind that sogginess can cause root rot in azaleas. Because of this, it’s a good idea to add several inches of an organic mulch like pine straw or chopped bark to azalea beds to help maintain moisture without overwatering.

The soil of a potted indoor azalea plant also should be kept lightly moist at all times. Use rainwater or spring water, if possible, so that hard tap water doesn’t sweeten the soil.

These shrubs generally can receive most of the nutrients they need from their soil. However, you might want to feed them lightly a couple times per year, in early spring and early summer with an acidic organic fertilizer such as 4-3-4. Never feed them after midsummer, however. If you intend to grow azaleas in soil that isn’t acidic enough, you might need to apply sulfur or iron sulfate to that soil several months in advance to “sour” it.

Fertilize houseplant azaleas during summer only, following the directions on the container. Opt for a water-soluble food for acid-loving plants that contains iron.

Azaleas don’t require the removal of faded flower trusses that true rhododendrons do. However, if you want to cut your azalea bush back a bit, do so just after the plant has bloomed—before the month of July.

Should it have grown so old and scraggly that you prefer to try a more drastic rejuvenation, cut azalea back to within 6 to 12 inches of the ground in early spring, keeping in mind that such a scalping will eliminate all flowers that year. Once new shoots are a foot tall, pinch out their tips to force them to branch out.

Probably the easiest way to propagate an azalea is by layering. To try that, bend a branch down to the ground without detaching it from the bush. Scrape a little bark off of that branch and soak the de-barked area with rooting hormone before pinning it down in a shallow trench and covering it with an inch or two of soil. The part of the branch that’s underground should make roots within a year or so, after which point it can be detached from its mother shrub.

All rhododendrons, including azaleas, are extremely toxic to people, animals, and fish. However, livestock—especially sheep and goats—are more likely to graze on them than your children or pets are. For that reason, you’ll want to keep the bushes well away from pastures and, of course, from fishponds.

Symptoms of poisoning in both animals and humans can include vomiting, drooling, and diarrhea, as well as weakness and paralysis. Keep in mind that nectar from rhododendrons also can render honey toxic.

Root rot in azaleas causes wilt that looks similar to that brought on by drought, but it actually indicates that too much water has caused the roots to decay. In that case, there is little hope of saving the plant.

Chlorosis, in which an azalea bush’s leaves are yellow with green veining, generally indicates that the ground is too alkaline, preventing the uptake of minerals such as iron or manganese. You can acidify the soil with iron sulfate, but it might take months to assimilate. For a faster—but only temporary—solution, spray iron or manganese chelates directly onto the foliage.

If you wish to force a houseplant azalea to bloom again, leave it out late in autumn until it has experienced 6 to 8 weeks of nighttime temperatures between 40 and 50 degrees Fahrenheit. Take it indoors before those temperatures drop below freezing, placing it atop a humidity tray in a cool, airy position where it receives bright indirect light and temperatures between 60 and 75 degrees.

Should your outdoor azaleas be planted in a position shielded from wind—as detailed under “Planting Azaleas” above—and mulched with 2 to 3 inches of shredded bark, it probably won’t need any additional protection to remain evergreen.

Looking for more flowering shrubs? Check out our guides on growing butterfly bush, hibiscus, and shrubs that thrive in full sun.

The 9 Easiest Plants You Can Buy on Amazon

6 Surefire Ways to Attract Hummingbirds to Your Yard

Can Hydrangeas Grow in Pots?

10 New Perennials to Perk Up Your Garden