If you can’t make heads or tails of your tailflower, we’ll help you figure out how to keep it bright-eyed and bushy-tailed. 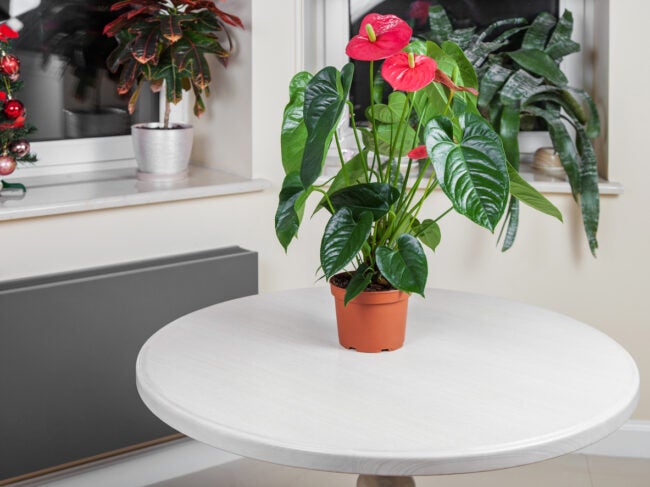 Also called “flamingo plant” or “red peace lily” for its usually pink or red spathes, Anthurium actually means “tailflower.” The tail is the spadix, which “wags” from the center of each spathe and contains the real (and tiny) blooms of the plant.

The spathes often considered to be the plant’s blooms are actually waxy, long-lasting bracts with glossy colors reminiscent of some lipsticks. Anthurium care is fairly easy for the traditional flowering types but more challenging for recently popular and expensive “unicorn” varieties grown for their showy leaves rather than their bracts.

RELATED: The Best Houseplants for Every Shade of Green Thumb

Anthurium Care at a Glance

Most anthuriums with colorful bracts derive from either Anthurium andraeanum or A. scherzerianum. In Tropical Flowering Plants, Kirsten Albrecht Llamas describes those descendants as “mass-produced clones of uncertain ancestry,” dubbed Anthurium x cultorum for A. andraeanum’s progeny and A. x hortulanum for A. scherzerianum’s offspring.

Called pigtail anthuriums because their orange or red spadices twist, A. x hortulanum types generally have spathes that curve backward at the edges and lance-shaped leaves. The A. x cultorum varieties, on the other hand, boast straight white or yellow spadices, heart-shaped leaves, and spathes whose edges curve inward and exhibit what Llamas describes as “a hammered metal texture.”

The showy foliage of unicorn types varies widely and includes heart-shaped, palmate, narrow, and birds’ nest–like leaves. Those leaves do tend to be large, however—up to several feet long in some cases. Epiphytic or semi-epiphytic in nature, anthuriums originated on trees beneath the canopies of Central and South American rainforests.

Because they are epiphytes, anthuriums succumb to root rot easily when planted in heavy soil, so you’ll need a porous mix. A tropical potting mix that includes lava rock is one possibility.

Another mix is attributed to Missouri Botanical Garden, which calls for a combination of 30 percent moisture-control potting soil, 20 percent peat moss, 40 percent orchid potting mix, and 10 percent perlite, along with a couple of handfuls each of cedar mulch and sphagnum moss.

Alternatively, try the simpler mix of one part peat moss, one part pine bark, and one part perlite suggested by the University of Vermont, or the one part cacti potting mix and one part orchid mix recommended by Clemson Cooperative Extension.

In any case, keep your anthurium plant “tightly” potted with no more than ¾ inch of soil between the root ball and the side of your pot. That helps prevent sogginess caused by excess soil.

Because they grow beneath the forest canopy, anthuriums prefer bright shade, or what often is called bright indirect light. Therefore, if you wish to place your plant on a sunny windowsill, suspend a sheer curtain between it and the glass. You shouldn’t need that drape for an east-facing window, since mild morning sun is considered equivalent to bright indirect light.

The smaller flowering types of anthurium also can thrive under a grow light. Whatever position you choose should offer at least 100 foot-candles of light, but 500 would be better. Grow lights for tropical plants should be left on for 12 to 16 hours every day.

Keep your plant’s soil lightly moist during the growing season in spring and summer. As mentioned above, that soil should be porous enough that water drains quickly from it, leaving dampness but no soggy spots.

Reduce that moisture a bit in fall and winter, perhaps allowing the surface of the plant’s soil to dry out before you water it again. If the anthurium begins to produce aerial roots on its stems above the soil, cover those roots with sphagnum moss and mist the moss occasionally to keep it damp. Keep in mind that most plants prefer rainwater or spring water to hard tap water.

During spring and summer, fertilize a flowering type of anthurium once per month with a water-soluble, high-phosphorus, bloom-promoting type of plant food—such as 15-30-15—in which the middle number is the largest of the three. Make sure you use the amount recommended for houseplants, which generally is quite a bit less than that specified for outdoor plants.

For the more recently popular unicorn types, you might want to follow the “weekly, weakly” schedule often suggested for tropical plants. That means you should feed once per week with balanced plant food, such as 20-20-20, but apply only a quarter of the amount of fertilizer recommended. For example, if the label calls for ½ teaspoon of granules per gallon of water use only ⅛ teaspoon. You may also want to provide a little magnesium once a month with about 2 tablespoons of Epsom salts mixed into 1 gallon of water.

Anthurium flowers enjoy normal household temperatures but can tolerate anything between 60 and 85 degrees Fahrenheit. In winter, you may want to provide the plant a 6-week rest at 60 to 65 degrees Fahrenheit, which reportedly encourages it to bloom. Keep it out of drafts, however, and don’t expose it to conditions below 60 degrees.

The plant also enjoys humidity, which you can provide by misting it frequently, as well as by placing it in the bathroom or near the kitchen sink, on a humidity tray, or among a passel of other plants. Wipe its leaves with a damp cloth once a week or so to remove any dust that accumulates.

Although the relatively small flowering anthuriums will tolerate the moderate humidity of the average home, the larger unicorn varieties may require a shady spot in a warm greenhouse or sunroom to thrive.

An anthurium multiplies by producing more crowns beside the parent one. (The crown is the part of the plant from which both stems and roots emerge, so the parent plant is essentially producing smaller plants around it.) To propagate anthurium, remove the plant from its pot and ease the young crown free from the parent one, being careful not to damage the roots or foliage of either. You can then give the new crown its own pot—preferably a somewhat shallow one that is not too large for it, filled with the same potting mix as the original pot’s.

Anthurium foliage contains oxalic acid, which makes it toxic, but North Carolina State Extension notes consumption of the plant is unlikely to be fatal unless a human or pet eats a large amount of it. However, it causes a very unpleasant burning sensation when chewed. For those reasons, keep this plant where young children and pets can’t reach it.

Anthurium sap can reportedly irritate skin and eyes as well. Wear plastic gloves and goggles or safety glasses when pruning the foliage to avoid getting any anthurium juice into your eyes, and wash your shears well afterward.

Although not often bothered by pests, anthurium leaves take on less-than-appealing colors when the plant is stressed. Yellowing foliage often indicates that the roots have been kept too soggy, perhaps due to poorly draining soil, and may be succumbing to root rot. If only the lowest leaves appear jaundiced and dark-tipped, you may have fed the plant too much. Brown tips unaccompanied by yellow point to insufficient humidity.

Should you notice insects resembling fruit flies flitting about the pot, you might want to allow its potting mix to dry out a bit more between waterings to avoid attracting those fungus gnats. Yellow sticky traps also will help keep them under control.

RELATED: The Best Planters You Can Buy Right Now

Whether you are growing the traditional flamingo anthurium (which is prettier than the kitschy lawn ornaments) or one of the newer unicorn types (almost as rare as the mythical beast itself), check below for quick answers on anthurium care.

Q. How do you keep anthurium blooming?

Provide your anthurium plant with a cooler rest period of 60 to 65 degrees for 6 weeks during winter to keep it flowering the rest of the year.

Q. How often should I water my anthurium?

Water the plant often enough to keep its soil lightly moist during summer and a bit less moist during winter.

Anthuriums prefer bright indirect light, which means no direct sun (except from an east-facing window).

If well cared for, your plant can live for 5 years or more.

Yes, anthurium prefers to be kept in a somewhat close-fitting pot to prevent the sogginess that can cause root decay.

Q. How do you speed up anthurium growth?

Feed your anthurium regularly, as described under “Fertilizing Anthuriums” above, for rapid growth.

Q. How do I make my anthurium leaves turn red?

The bracts that are considered the plant’s flowers should turn red on their own, provided that you have purchased a red cultivar.

Looking for more low-light flowering plants? Check out our guides on caring for goldfish plant, peace lily, and coffee plant.

This Guide to Nerve Plant Care will Yield Flashy Foliage for Your...
Advertisement

Solved! 8 Flowers Sure to Bloom in Winter

10 Perfectly Good Pond Plants You Should Be Buying at Your Local ...

7 Types of Pine Trees That are Great for Home Landscapes