In IKEA's latest adventure in hypnosis-powered time travel, the brand puts a spotlight on the unsung importance of the role everyday spaces play in our past, present, and future lives. 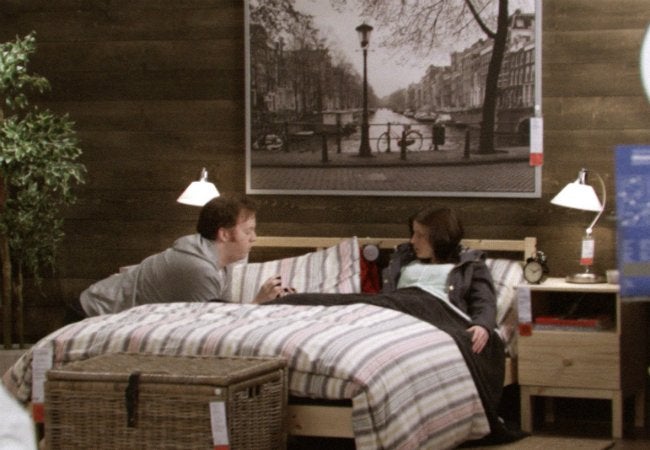 Meet Jeff and Beth, the latest participants in the “time travel experiment” IKEA has been running to promote its fall catalog. We previously covered the teaser trailer that first introduced the campaign’s provocative concept: renowned hypnotist Justin Tranz guiding (perfectly willing) shoppers through an experience designed to make the volunteers believe… they’re in the future. When the first full video arrived on the internet, we all watched together as Tranz worked his magic.

Now Tranz has returned, this time leading an unmarried couple through scenes of their potential future together. We actually witness Jeff propose to Beth (and her hilarious reaction). We laugh again as Jeff interacts with the actor portraying the young son he might somebody have. And we cringe when the couple try to appease the teenager they apparently believe to be their own. Skeptical? So were we. So was Jeff! In an interview spliced into the action, Jeff remarks of hypnotism, “I just assumed people faked it all the time.” Afterward, he admits, “Now I don’t know what I believe. I believed I was in the future. I believed we had kids.”

Tranz explains that hypnosis works by lulling participants into a somnambulant state in which they take suggestions as fact. But a large part of the success here must also owe to the totally convincing setting, which was assembled on-site from products available in the showroom. Lately, IKEA has paid close attention to the importance of the bedroom—that’s where the Jeff-and-Beth scenes take place—and of the bathroom, which played such a big role in the first video installment.

Mattias Jöngard, Global Communication Manager at the Swedish retailer, says, “The Time Travel Experiment is our way to start a conversation about the everyday moments that, more often than people think, happen in the bedroom and bathroom.” While the videos simulated adventures amply demonstrate that life events are often beyond our control, we all have the power to make our spaces functional, comfortable, and conducive to happiness. And for that, we can thank IKEA.

This post has been brought to you by IKEA. Its facts and opinions are those of BobVila.com.

Seat Yourself: 11 Ways to DIY Your Own Chair

11 Things Never to Buy at IKEA