The Best Places to Buy a Refrigerator in 2023

A refrigerator is a key kitchen appliance, but where are the best places to buy a refrigerator when you’re ready to shop for your new one? 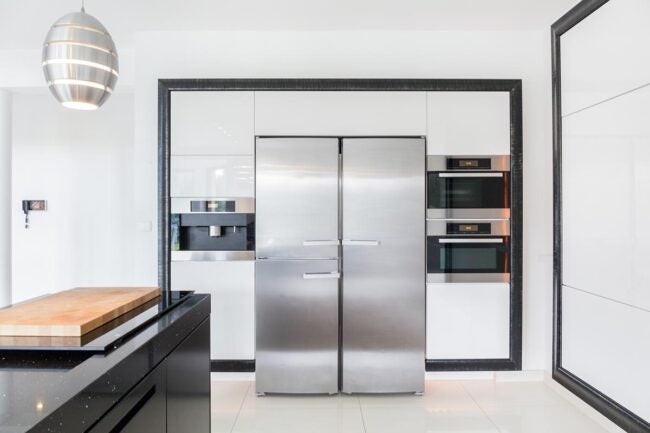 It’s hard to imagine modern life without a refrigerator. It is undoubtedly such a necessary kitchen appliance that many homes also have a second one, either in another part of the house—like the basement—or in the garage. Manufacturers respond to this need with a bewildering array of different models in sizes and styles to meet just about every preference.

Additionally, a wide choice of retailers offers competitive pricing and sometimes even unique exclusives. But never fear; this guide to the best places to buy a refrigerator will help narrow your options. Not only will this guide consider the relative merits of each retailer, but it will also highlight exceptional products from each retailer to zero in on the potential choices.

Known for: Originally known for home improvement products, The Home Depot has expanded to offer almost everything for the home and garden at very competitive prices.
Price: $ – $$$
Editors’ Choice: The Whirlpool 14.3 cu. ft. Top Freezer Refrigerator (available at The Home Depot) is a popular midsize model with a versatile, multi-compartment interior and convenient reversible doors.

The Home Depot was founded in 1978 and is headquartered in Cobb County, Georgia. It has stores in all the 50 U.S. states, plus the District of Columbia, Canada, Guam, Mexico, Puerto Rico, and the U.S. Virgin Islands.

While the company’s brick-and-mortar stores average around 40,000 products in their inventory, its online operation boasts upward of 250,000 products. Shoppers can opt for home delivery or bring home products themselves from their nearest store with the knowledge that they are supplied and supported by The Home Depot rather than a third party, as frequently happens with Amazon. However, the company has found it difficult to achieve international success.

Shop refrigerators at The Home Depot

Known for: Lowe’s is arguably the most respected and relied upon home improvement store for DIY projects, though it now also offers interior design and home fashions, electronics, appliances, and garden care products.
Price: $ – $$$
Editors’ Choice: The LG 20.2-cu ft Top-Freezer Refrigerator (available at Lowe’s) is Energy Star–rated with features that include digital temperature settings and a humidity-controlled crisper for fruit and vegetables.

L.S. Lowe opened Lowe’s North Wilkesboro Hardware Store in North Carolina in 1921. The building boom at the end of World War II brought commercial success and ongoing expansion. As a result, Lowe’s went public in 1961 and was listed on the New York Stock Exchange in 1979. The company also has stores in Canada and India.

Big corporations sometimes have a poor reputation in terms of employee relations, but that’s seldom the case with Lowe’s. The company has an Employee Relief Fund to help workers (known as Associates) through financial difficulties, and Forbes has named it among the World’s Most Admired Companies of 2023.

Known for: Best Buy is one of the world’s largest consumer electronics retailers and appliances, also offering installation and tech support via thousands of Geek Squad Agents across the U.S.
Price: $ – $$$
Editors’ Choice: The Samsung – 26.5 cu. ft. Large Capacity 3-Door French Door Refrigerator (available at Best Buy) features the popular French door style. It offers a clever control panel that provides a “look inside” feature, an onboard shopping list, and remote monitoring via a smartphone.

Best Buy began in St. Paul, Minnesota, in 1966. Back then, the company was called Sound of Music and specialized in high-fidelity music systems. In 1983, the Sound of Music became Best Buy. It is still headquartered in Minnesota, now in Richfield.

At one time, Best Buy’s 1,600 U.S.-based stores employed 125,000 people. The international division has operations in Canada and Mexico. However, attempts to establish itself in China and Europe, where the company faced intense local competition, have been less successful. Recent times have been challenging at Best Buy, with significant staff layoffs, store restructurings, and a greater focus on the e-commerce side of the business.

Best Buy is keen to promote its environmental credentials—the company claims to have both reduced its own carbon footprint and helped customers recycle over $1 billion of electrical waste.

Shop all refrigerators at BestBuy

Known for: This online-only business is one of the largest furniture and home decor retailers and also provides a marketplace for many independent vendors.
Price: $ – $$$
Editors’ Choice: The Forno Salerno Stainless Steel 15.6 cu. ft. Refrigerator (available at Wayfair.com) is a sleek, countertop-depth design with a fingerprint-resistant finish, a door-open alarm, a child lock, and an energy-saving vacation mode.

Wayfair was founded in 2002 and originally called CSN Stores. It actually began as Conine’s Nursery in Boston, Massachusetts, selling media stands and storage furniture within the U.S. By 2009, the company was shipping products to Canada, Germany, and the United Kingdom and continued expanding through a chain of 200 different online stores in many niches.

The company rebranded as Wayfair in 2011. In recent years, Wayfair has consistently been ranked among the best online-only furniture retailers in America. The company opened its first physical store in Natick, Massachusetts, in 2019, though the experiment was not a success.

Shop all refrigerators at Wayfair

Known for: Amazon’s pricing policy and expansive product options ensure it is always highly competitive, including for low-cost refrigerators.
Price: $ – $$$
Editors’ Choice: The Galanz GLR33MGNR10 Retro Compact Refrigerator (available on Amazon) is a high-efficiency, retro-style design that offers invaluable cold storage for the smallest of spaces.

It’s sometimes difficult to conceive that one of the world’s largest and richest companies began operations only 25 years ago, but—as we all know—it’s true. Amazon is headquartered in Seattle, Washington, and currently boasts representation or distribution in 58 countries around the world.

Although Amazon started as an online bookseller, the company now dominates the market in a wide range of products. From its small beginnings grew the massive retail organization that promises low prices and rapid delivery. Amazon is also one of the leading cloud computing providers, in addition to being involved with film and TV production and distribution, music streaming, and a recently acquired autonomous taxi company.

Shop all refrigerators at Amazon

Known for: Costco is one of the world’s largest retailers and operates as a wholesale club that allows members to buy a huge range of products at big discounts.
Price: $ – $$
Editors’ Choice: The Whirlpool 25 cu. ft. 36-inch Wide French Door Refrigerator (available at Costco) offers 36 inches of highly flexible storage, a filtered ice and water dispenser, and Accu-Chill precision temperature control.

The first Costco opened in Seattle, Washington, in 1983. In 1993, the company merged with Price Club, owned by Sol Price, one of the pioneers of the aptly named “warehouse retailing.” Originally called Price/Costco, it became Costco Companies in 1997 and finally, Costco Wholesale Corporation in 1999. The current base of operations is Issaquah, Washington.

Costco makes significant income from the sale of annual memberships. As a result, it is less reliant on profit from actual product sales and can offer deep discounts. This approach has proven tremendously successful, with the company featuring international branches in Australia, Canada, Europe, the Far East, and Mexico. The company also has a reputation for employee pay that is well above average for the sector and provides company-sponsored health care—for which the majority of employees are eligible.

Shop all refrigerators at Costco

Known for: Walmart’s extensive international chain of grocery and department stores ranks it among the biggest companies in the world.
Price: $ – $$
Editors’ Choice: The budget-friendly Arctic King 3.2 Cu ft Two Door Compact Refrigerator (available at Walmart) offers a freezer compartment and a fruit and vegetable crisper. It is ideally sized for a small apartment or as an overflow refrigerator in a utility room or a garage.

Sam Walton founded Walmart in 1962, and the company’s corporate headquarters is in Bentonville, Arkansas. Early stores were in rural areas, avoiding head-on competition from store giants like Kmart and Sears. Walmart grew through a chain of discount warehouses and grocery and merchandise superstores, and by 1990, it had overtaken its rivals to become the largest retailer in the U.S.

International expansion followed, both through own-brand stores and buyouts, and the company now has a presence in Canada, China, Germany, Mexico, and the United Kingdom. Fortune ranks Walmart as the largest company in America in 2023 with $559.1 million in revenue and 2.3 million employees.

Shop all refrigerators at Walmart

Known for: AJ Madison calls itself “Your Appliance Authority” with a business focused on kitchen and household devices for private and trade customers.
Price: $ – $$$
Editors’ Choice: The JennAir 24 Inch Built-In Undercounter Refrigerator (available at AJ Madison) offers electronic temperature controls, a door lock, and an alarm, and is panel-ready for discreet inclusion with existing decor.

AJ Madison was founded in 2000 as an online retailer of electrical appliances and is headquartered in Brooklyn, New York. From its inception, the company has focused on offering competitive prices and high standards of customer care, underlined by its commitment to “service after the sale.”

AJ Madison notes that it offers appliances from every major brand via 159 suppliers, making it a great place to shop for consumers who are looking for more unusual or less common refrigerators. The company has large, high-end showrooms in Brooklyn, New York; the DC Metro area; and Miami, Florida.

Shop all refrigerators at AJ Madison

Known for: Abt is a family-run firm that started as an appliance store but now sells everything from electronics and home furnishings to jewelry and indoor games.
Price: $ – $$$
Editors’ Choice: The Cafe ENERGY STAR 27.4 Cu. Ft. Smart Quad-Door Refrigerator (available at Abt) offers outstanding space and versatility with the ability to set individual temperature zones and control produce humidity, and it boasts Wi-Fi connectivity.

While many people think “Abt” are just initials, it is, in fact, the founder’s surname. The company began in Chicago, Illinois, in 1936, when Jewel Abt gave her husband David $800 (about $15,000 today) to start a business. The company still owns just the single physical outlet, but its Glenview, Illinois, facility is a 350,000-square-foot mini business park with its own Apple Store and a 7,500-gallon saltwater aquarium.

In 1997, Abt launched its website, never forgetting the company’s core values of high-quality products and great customer service. Abt ships their products free to all 50 states. The company is now in the hands of the third generation of the Abt family. In addition to its ever-increasing growth, Abt has received a raft of independent awards over the years as a best place to buy appliances, one of Chicago’s top workplaces, and recognition for service to the community.

Shop all refrigerators at Abt

Known for: Appliance Connection began as an appliance and furniture retailer with a reputation for luxury items, though its current range of products covers many market sectors.
Price: $ – $$$
Editors’ Choice: The Miele KF2982SF MasterCool Series French Door Refrigerator (available at Appliances Connection) is a high-quality and energy-efficient appliance that offers a host of user-friendly features, including precise digital control, convenient push-to-open doors, and Wi-Fi connectivity.

Appliances Connection began in 2001 with its main base of operations and a showroom in Brooklyn, New York, in addition to 200,000 square feet of warehousing in nearby New Jersey. Although the company must order some products from manufacturers to fulfill customer orders, having its own facility means Appliances Connection can ship many orders immediately, supporting its aim of better customer service. Independent reviews of customer satisfaction ratings suggest the company’s reputation is solid.

From its origins as a supplier of kitchen appliances, Appliances Connection has expanded its offerings to include furniture, TVs, fitness equipment, outdoor grills, and garden furniture. The company also sells commercial appliances to the building trade and other professional installers.

Shop all refrigerators at Appliance Connection