All You Need to Know About Board and Batten

Find out what it takes to achieve this rustic, popular, DIY-friendly look as exterior siding and interior trim. 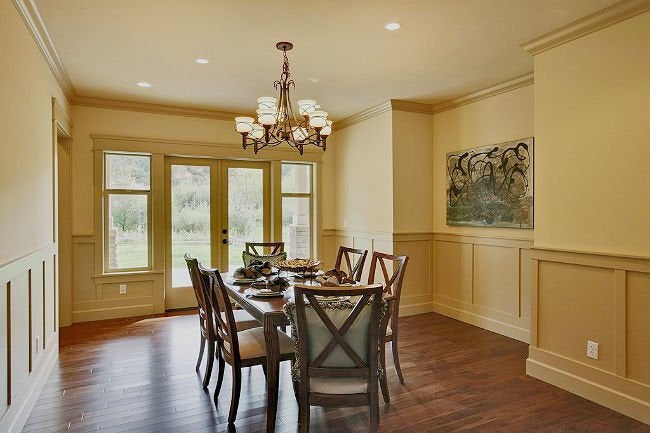 Wood siding that consists of narrow vertical strips (battens) installed over a flat base (board) is known, logically enough, as board and batten. It’s been popular for centuries on the exterior of houses as well as storage sheds, barns, and other agricultural outbuildings; it’s since become on trend as a trim to add visual interest to interior walls. Read on to learn all about board and batten—from its water-shedding original use to its current decorative appeal, as well as its cost and installation particulars for outdoor and indoor applications.

From Practical to Just Plain Pretty

With the arrival of sawmills to 18th Century America, home construction began moving away from whole logs (as in cabins) and masonry towards lumber. A skeletal frame would be constructed, over which long flat boards were attached to form a weather-resistant barrier. Installing boards vertically encouraged rain to run down along the outside of the house rather than seep in. Adding battens to cover the seams between the larger boards provided extra weather-proofing protection.

The large flat boards had a tendency to warp, however, and by the late 1800s, horizontal lapped siding (narrow horizontal boards installed from the bottom up, with each subsequent board lapping the one below) proved more efficient at shedding rain and so became the norm. Today, board and batten siding is kiln-dried to reduce warping, and it’s installed over framing, sheathing, and a vapor barrier to lend greater structural integrity.

That said, any type of wood used outdoors should be resistant to moisture and insect damage. Cedar is a common choice for exterior board and batten siding, but other acceptable wood species include Cyprus, redwood, locust, white oak, and hemlock.

Board and batten moved inside in the late 1800s as a way to prevent the dents and dings on the lower portion of plaster walls, caused by scooted chairs and other everyday bumps. Around the mid-1900s, board and batten became a desirable “look,” particularly in bungalows, Arts and Crafts, and Country style homes.

RELATED: 16 Times Shiplap Made the Room

While board and batten trim can be installed on an entire wall, from floor to ceiling, or any height you desire, the most popular interior application is about 32 inches up from the floor, similar to beadboard wainscoting.

Installing board and batten exterior siding is more expensive than vinyl siding but comparable in price to engineered wood and cement-fiber siding. Siding is measured and estimated in “squares,” with each square containing 100 square feet. Both cedar and redwood are comparable in price, running $500 to $650 per square when using 1×12 boards for the wide planks and 1×2 boards for the narrower battens. The cost to install Cyprus, locust, white oak or hemlock runs about $250 to $400 per square. Add another $15 to $50 per square (for any type of wood) to seal, stain, or paint the siding after it’s installed, and for the screws, caulking, and furring strips required for installation (see below).

Trimming interior walls with board and batten is far less expensive because no base planks are used—the battens install directly to drywall, which substitutes for the wider vertical boards used in exterior siding. It’s also possible to use cheaper wood, such as pine, because interior walls needn’t stand up to the elements.

Instead of squares, the standard is to estimate the cost of interior board and batten is per linear foot. For example, to install a board and batten wainscoting (32 inches high), using 1×4 boards (spaced 12 inches apart, for instance) and installing a horizontal top board and a baseboard (of the same dimension), you’d pay approximately $3.00 to $4.00 per linear foot. The cost will increase if you choose to position the battens closer together or extend the battens higher on the wall. Add another $1.00 to $1.50 per linear foot for paint or enamel, plus the nails and glue required to install the boards. 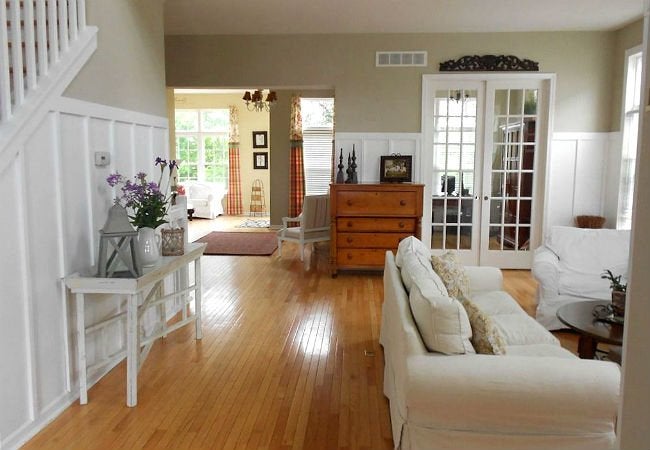 The Ins and Outs of Installation

If you have basic carpentry skills, including the ability to measure and cut the boards precisely, and you’re comfortable using a circular saw, a caulking gun, and a nail gun or screw gun, you can install either type of board and batten—the exterior siding or the interior trim. Interior board and batten trim is much easier to install, however, because less work is involved, so it’s better suited to the newbie do-it-yourselfer.

BOARD AND BATTEN EXTERIOR SIDING

Here’s how the process unfolds: 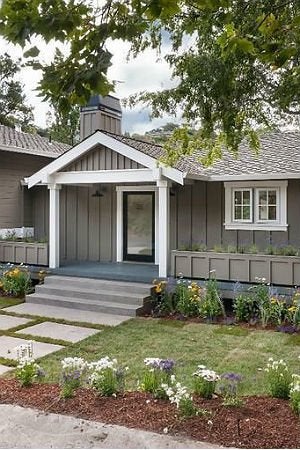 • Install furring strips. In order to securely attach the vertical flat boards to the exterior of your house, you’ll need to install horizontal furring strips, which provide a structural frame on which to attach the boards. Furring strips can be made by attaching 1×4 boards horizontally to your home’s plywood sheathing, spacing them 24 inches apart, and nailing them to the studs beneath the sheathing.

• Measure and cut. This is where precision comes in, and the old saying “measure twice, cut once” applies. Measure from the underside of the soffit to ¼ inch below the top of the foundation. Use a circular saw to cut the ends of the boards.

• Leave gaps when installing boards. No matter what type of wood you choose, it’s likely to expand and contract slightly due to weather variations, and if the boards are pressed tightly against one another, the pressure could cause warping. To keep this from happening, rather than butt the top of the boards tightly against the soffit, leave a ¼-inch gap. This will put the bottom of the board ½ inch below the top of the foundation, which will help protect the wood sill plate, located on the top of the foundation, from the rain. Likewise, keep a ¼-inch gap between the vertical boards as you attach them to the furring strips.

• Use galvanized screws, which don’t rust or corrode, so you won’t end up with rust stains on your wood siding.

• Add a top trim board. Once the vertical boards are in place, install a top trim board (using battens), positioned horizontally and butted tightly against the soffit. This will cover the ¼-inch gap and give you something to butt the top end of the battens into.

• Attach the battens. The battens should butt tightly against the top trim board and be flush at the bottom with the wider vertical boards. While the width of the battens is your choice, they should be wide enough to overlap the edges of the larger boards by at least ½ inch on both sides.

BOARD AND BATTEN INTERIOR TRIM

To create the board and batten look on an interior wall: 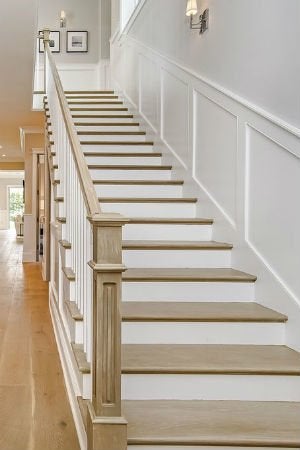 • Create a layout on paper. Doing a layout on paper will let you adjust the spacing of the battens for a uniform look. Measure your wall and create a to-scale layout so you’ll have a balanced pattern across the wall. This will prevent issues such as having a 12-inch space between battens at one corner and only a 3-inch space at the other corner.

• Replace the baseboard. Standard baseboards are usually thinner than the boards you’ll want to use as battens. For a uniform look, remove the baseboard and install a new base, using a board the same thickness as your battens. Use finish nails to attach the board to the wall studs.

RELATED: 9 Ways to Dress Up a Room with Molding

• Install the top trim before the battens. Even though they may look perfectly square, walls and floors are often slightly out of level. Use a level to install the top trim board and attach it to the wall studs with finish nails. Then, measure and cut each batten separately—the measurements may vary slightly.

• Glue first, and finish with nails. Since drywall is made from compressed gypsum, which is crumbly and does not hold nails securely—you’ll need to use construction glue to attach the battens. Apply a zigzag bead of glue to the back of a batten, but not so much that it oozes out when you position batten on the wall. With the batten in place, insert a couple of finish nails at angles to attach the bottom and the top of the batten to the trim boards. Halfway between the top and bottom, where the board may gap away from the wall, insert a couple of finish nails, angling them inward just to help hold the board tightly in place as the glue dries.

• Fill holes, and then paint. Smooth spackling in the holes left by the finish nails and then paint both the boards and the wall beneath to create a finished look. Because the board and batten look is considered “trim work,” it’s best to use an enamel that matches the other trim in the room, rather than standard wall paint to paint the trim.

11 Ways You're Accidentally Ruining Your Lawn