Solved! What Are These Bugs That Look Like Bed Bugs in My Home?

Whether you’re dealing with a common pest or a more obscure species, bugs that look like bedbugs need to be identified and treated immediately. This guide can help you determine which type of insect is invading your home. 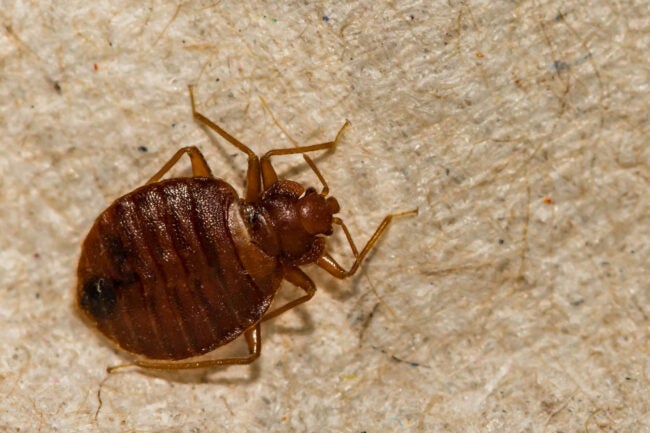 Q: I recently noticed bugs that look like bed bugs in my home, and I’m concerned about an infestation. What do bed bugs look like? Do bed bugs have wings, and do bed bugs fly?

A: If you’re dealing with bedbugs or bugs that look like bedbugs, you have reason to be concerned. An insect infestation can be tricky to identify and treat but also unpleasant for homeowners to encounter. Bedbugs are typically brown, oval-shaped creatures about ¼-inch long (and good news: They don’t fly). An easy indicator of a bedbug infestation is the presence of bites on your skin, typically in groups of three. You can also do a thorough check of your bedding, mattress, and headboard to see if droppings, insect eggs, or blood stains are present. If signs of bedbugs are observable, you can look up how to get rid of bedbugs and what next steps to take. If you’re still unsure whether you have a bedbug problem or are dealing with a different pest, the following tips and tricks can help you figure out what to do if your home is infested.

Baby cockroaches, or cockroach nymphs, are confused with bed bugs because of their similar coloring.

Before they grow up to be easily identifiable, cockroach nymphs can be mistaken for bedbugs because of their brown hue. However, the pesky creatures don’t often inhabit beds or bedding and instead prefer warm, moisture-rich areas where food debris is found (think kitchen appliances such as toasters and coffee makers or the back of microwaves, ovens, and refrigerators). Unlike bedbugs, cockroaches don’t feed on humans and therefore don’t bite. However, like other nocturnal insects, they become more active at night since they don’t like to be disturbed.

If you have a baby cockroach problem, a thorough housecleaning can help eliminate the bugs, but the help of a pest control professional may eliminate the issue more quickly. A professional will have access to special equipment, tools, and sprays that are better handled by someone with experience.

Due to their small size, booklice and bed bugs look similar and are easy to confuse. Booklice that live indoors, however, tend to gravitate toward damp, moisture-rich areas such as basements or attics. These insects feed on microscopic molds, so they’re more likely to inhabit humid spaces to survive. If you have a booklice (or psocid) infestation, the positive side of the problem is that the creatures are harmless; they don’t bite as actual lice do, so their name can be misleading.

It’s advised to get rid of the moist, humid conditions that booklice need to thrive to eliminate these pests from the home. Standard household cleaning products and dehumidifiers can eliminate mold and moisture. You can also open up windows in bathrooms or other humid spaces or bring in fans to increase airflow and dry out the space. If you have a mold problem beyond your control, it may be wise to contact a mold remediation specialist.

Carpet beetles can resemble bed bugs, but they are darker in color.

If you see oval-shaped insects on or near your clothing, there’s a chance the tiny brown bugs you’ve noticed are carpet beetles. Often mistaken for clothes moths, young carpet beetles are about ¼- to ⅛-inch in length and feed on animal-based materials like wool, fur, felt, silk, leather, and feathers. You’ll want to check household items such as comforters, blankets, rugs, and down pillows, as well as scarves and sweaters, to see if any damage has been done. Edges and undersides of carpet and rugs can also be common spots for carpet beetle infestation.

If the pesky insects have already infested your closet, carpet, or other dark corners of the home, you will need to identify which items have been impacted and wash and/or dry clean them to remove the larvae. Hot laundering can kill off larvae and eggs, which will prevent the spread of more beetles. Vacuuming rugs, carpets, and flooring can also remove larvae and the hair and lint they often are attracted to.

Prevention is the best method to keep carpet beetles from infesting your home. Storing clothing with animal-based fibers in containers with lids or tight-fitting plastic bags after they have been adequately laundered will ensure the insects can’t access their source of food and therefore can’t damage your clothing, bedding, or other housewares.

Spider beetles and bedbugs share similar coloring and both have six legs, but their commonalities typically end there. The two bugs’ reddish-brown hues can make them easy to mix up, but spider beetles are most likely found in the kitchen or in areas where food is stored or prepped and not in bedrooms like bedbugs. As their name suggests, spider beetles look like tiny spiders with two long extensions near their head, which can be mistaken for legs. They have round bodies with a smooth outer shell, making them more likely to be mistaken for spiders.

These beetles are foragers and feed on everything from almonds to cereals and beans, and their small size makes it easy for them to hide in small crevices or make their way into packaging. They can also be found in plants or taxidermied animals or moist areas, particularly after rainy periods. Because of these factors, they can easily become a nuisance and it can make finding the source of their infestation more difficult.

Suppose you need help identifying spider beetles or getting rid of a beetle infestation. In that case, it may be time to call in a professional pest control company to help determine the source of the bugs and how best to treat them.

Like bed bugs, ticks are bloodsucking insects and can resemble bed bugs at a glance.

If you’re debating whether you’re dealing with ticks or bedbugs, the good news is several attributes can help differentiate the two. While bedbugs look like reddish-brown insects with six legs, ticks often have darker coloring and eight striped legs. If you are dealing with tiny black bugs in bed, you likely have a bedbug infestation; ticks prefer the outdoors, where they can hide in tall grass, piles of leaves, or wooded areas. Ticks are often quite a bit smaller than bedbugs at roughly the size of a sesame seed, while bedbugs can swell up in size and can be as big as an apple seed.

Although bedbug bites can be a nuisance, ticks pose more of a threat to humans as they can transmit viral and bacterial pathogens through bites. Another significant difference between the two pests is when they prefer to bite their hosts. Bedbugs prefer nighttime feedings, latching on to their human hosts while they’re trying to get their beauty rest. Ticks, however, are diurnal, meaning they prefer to feed during the day, often during the afternoon. These differences can help you determine whether you have a tick problem or a bedbug problem and how to treat the situation properly.

Bat bugs can look like bed bugs, but it’s uncommon that you’ll find them in your home unless you have roosting bats nearby.

Because they look so similar, it can be easy to confuse bedbugs and bat bugs. However, one main and important difference between the two is where they can be found. Unlike bedbugs, which are found on mattresses, headboards, baseboards, and couches, bat bugs almost always stay close to their food source: bats. Bat bugs might be located on ceilings or walls or in unused chimneys, attics, or wall voids. If you have bat bugs, you likely have a bigger bat infestation problem on your hands. In this instance, you’ll need to call in the help of a professional to confirm that you have bat bugs and find the place the bat or bats are inhabiting.

Another small distinction between the two types of bugs that is harder to identify is the presence of hair on the upper thorax of bat bugs. A professional will have the tools to identify which type of bug you’re dealing with and help determine what next steps to take to eliminate the problem and prevent future infestation.

To curb your bat bug infestation, should you have one, the best plan of action is to find and get rid of the bats in your home. Once their food source is gone, the bat bugs will die off or leave the premises. After the bugs have been eliminated, you’ll need to disinfect any areas where they were found.

Fleas, head lice, and mites can all resemble bed bugs, but they’re usually smaller and harder to see.

Microscopic bugs like fleas, head lice, and mites are hard to identify because of their miniature size. The same can be said for bedbugs, which are usually about ¼-inch in size. However, if you search bedbug photos, they are usually more vivid in detail than photos of fleas, head lice, or mites. Another reason this trio of bugs can be mistaken for bedbugs is that they also cause welts or bites to show up on the skin, which is often a common sign of bedbugs. If fleas and mites find their way inside your home, a mild reaction on the skin from a bite is about as harmful as it gets. Although mites don’t bite, the bugs can cause human skin to develop a rash or allergies when in contact with the bugs. While mites feed on other insects or dead plants and animals, fleas live on mammals like household pets. Fleas can make their way from animals to humans and often cause small, red lumps on the skin that can be itchy and are found in threes (another reason they can be mistaken for bedbugs).

The best way to get rid of mites is to remove the animals (such as birds, mice, or rats) that could be bringing them into the home, as well as any animal nests. To eliminate fleas, the best solution is to treat the skin of your pet to ensure you and your animals don’t continue to get irritated. Over-the-counter flea products can be purchased, and warm baths and frequent vacuuming and cleaning can help prevent fleas from returning.

Most commonly found on children, head lice feed on the blood of human scalps and can be treated with prescription or over-the-counter products that rid the head of lice and their eggs. The most common sign of a head lice problem is an itchy, irritated scalp. Lice are about as small as a strawberry seed and are usually directly transferred from the head of someone else with lice. The best method of prevention is to avoid using others’ combs or brushes.

Whether you suspect that there are bedbugs in your home, or that you simply have bugs that look like bed bugs, the best way to know for sure is to call a pest control expert. Professionals can assess the situation and determine the best course of action, regardless of the type of critter that has made your home their home, too.

Solved! What Are These Bugs That Look Like Cockroaches in My Home?

Help! What Are These Tiny White Bugs in My House?

Solved! What Are the Small, Tiny Brown Bugs in My House?

Tick vs. Bed Bug: How to Tell the Difference Between These Notori...