Discover How This Innovative Skylight Even Shines at Night

Wholly unlike the skylights to which you're accustomed, a new option on the block provides home lighting no matter the weather, any time of day. 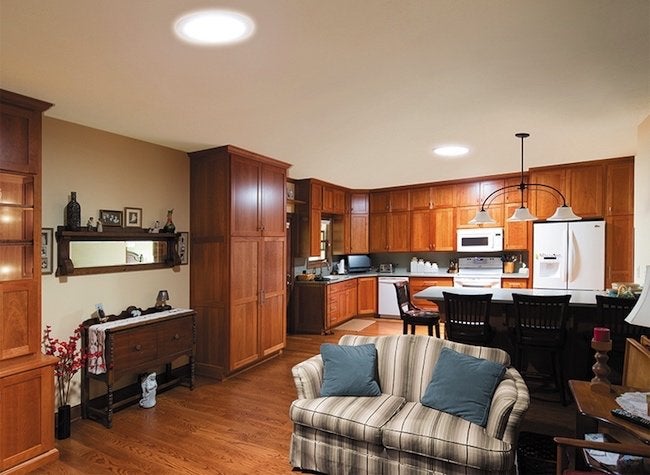 It doesn’t take 20/20 vision to see the vast difference between artificial light and bright, beautiful, mood-lifting natural illumination. Through the decades, homeowners have understood the distinction and its importance, often adding skylights to let the sun shine in. To be sure, some of the early skylights suffered performance problems, but advances in manufacturing have not only corrected past imperfections but opened up a range of new possibilities for the future.

Today, with its revolutionary approach to the category, Solatube International, Inc. ranks as a foremost industry leader. Whereas conventional skylights are essentially windows on the roof, Solatube offers something new, different, and, in the eyes of many, much better than what came before. We might be used to thinking of a skylight as illuminating only the space directly beneath it, but Solatube tubular daylighting devices (TDDs) are capable of delivering natural light to virtually any room, even on the ground floor of a multi-story home. What makes it all possible is a unique and groundbreaking design that relies on three principal components: a daylight-capturing dome, a highly reflective light-channeling tube, and a customizable in-room lens that finally delivers and diffuses the light. Running from the roof to the darkest, most tucked-away corner of your home, Solatube leverages cutting-edge optics to introduce daylight wherever you want it.

Compact and cost-effective, Solatube stands out for many compelling reasons. But here’s what might be most impressive: The company has actually figured out how to make skylights functional at night! Meet the Solatube Smart LED System, a one-of-a-kind hybrid lighting solution that’s always operable, sun or no sun.

DAY—AND NIGHT
For its Smart LED System, Solatube combines its daylighting technology with the latest in LEDs to provide an unparalleled home lighting solution. At its heart is a control center whose SunSense Technology continually monitors the amount of light coming in from the roof. If and when the light level drops—at sunset, for example, or during periods of heavy cloud cover—the SunSense Technology immediately activates the integrated LED bulbs. The homeowner might not even notice the transition from daylight to LED, and in certain instances, both types of lighting might work in concert. That’s how, unlike any other skylight before, Solatube Smart LED Systems always provides lighting, sun or no sun. It’s a revolutionary concept, and the implications are far-reaching. Remodelers once had to install extra lighting fixtures to account for the reality that, at night, the skylight would become non-operative—in effect, a big black rectangle. Now, rather than settle for an unsightly, Swiss cheese-like ceiling, you can achieve an uncluttered, streamlined look with single fixtures that provide both daytime and nighttime illumination.

THE LED ADVANTAGE
Each Solatube Smart LED System features a quartet of 3000K LED bulbs. To be clear: These are not the sort of bulbs you’re going to replace on a regular basis. LEDs are the longest lasting of any bulb type, often remaining viable for up to 20 years. That’s three times longer than compact fluorescents, eight times longer than halogens, and 25 times longer than incandescents! Indeed, a lot has changed since Thomas Edison and the advent of the familiar incandescent light bulb. Technology has advanced by leaps and bounds, and in the realm of lighting, LED reflects the very best of today.

EXTRAORDINARY EFFICIENCY
Inferior skylights let rooms become too hot in summer, too cold in winter. You could either live in discomfort or pay extra for your heating and cooling appliances to counteract the effect by working overtime. Neither option sounds very appealing, right? With the Smart LED System, you don’t need to worry about the skylight causing physical or financial discomfort. The system boasts the coveted ENERGY STAR rating for its ability to keep heat gain and heat loss to a bare minimum. Here, skylight installation doesn’t mean upsetting home temperature, and isn’t that the way it should be?

The Smart LED System actually saves money: Compared to a traditional light source, it’s 94% more efficient! That’s because sunlight obviously doesn’t cost anything, so when it’s daytime and sunny, you’re spending $0. Then at night, when the system switches over to LED, you benefit from the fact that, compared to incandescent bulbs, the newer technology requires dramatically less energy to run. Combine free sunlight with low-cost LED lighting, and you get serious savings on home lighting.

Achieve additional savings by choosing a Smart LED System with the optional occupancy sensor. The Solatube sensor detects whether there’s someone in the room, and it activates or deactivates the LED bulbs accordingly. That way, you can ensure that if a family member forgets to turn off the light, you don’t end up paying for the mistake at the end of the month. With the occupancy sensor option, you never need to think about hitting the light switch again, while enjoying maximum energy savings.

EASY INSTALLATION
Even a modestly sized conventional skylight can take days to install. In the hands of Solatube Premier Dealers, the Smart LED System takes just a couple of hours. Depending on your skills and experience, you might even be able to handle the installation yourself. That’s because the system requires no structural changes; the components fit between and around rafters and joists, making for a fast and easy project. Any place overhead light fixtures currently exist, Smart LEDs are particularly painless to install. That’s because here, there’s no need to run new wiring. What powered the previous fixture would simply be hooked up to power the new Solutube device. In this way—be it in a hallway, laundry room, or small bathroom—the Smart LED System allows homeowners to introduce clear, dazzling daylight into spaces formerly lit only by dim artificial light. Best of all, homeowners can do so in a non-intrusive way that requires minimal effort and virtually no modification to the home. Try saying something like that about a conventional skylight!

Homeowners love skylights for transforming dark, dreary interiors into bright, airy spaces. By virtue of its unique design, the Solatube Smart LED System goes where others cannot, introducing sunlight to virtually any room in the home. And unlike other skylights, past and present, this one doesn’t go dark when the sun goes down!

This post has been brought to you by Solatube. Its facts and opinions are those of BobVila.com.

The Economical, Environmental, and Emotional Benefits of Tubular ...
Advertisement

How Do Innovative Skylights Lead to Lower Bills?