How to Grow Wisteria

Are you wistful about wisteria after seeing a magnificent specimen of the blooming vine, but afraid it would be too invasive? 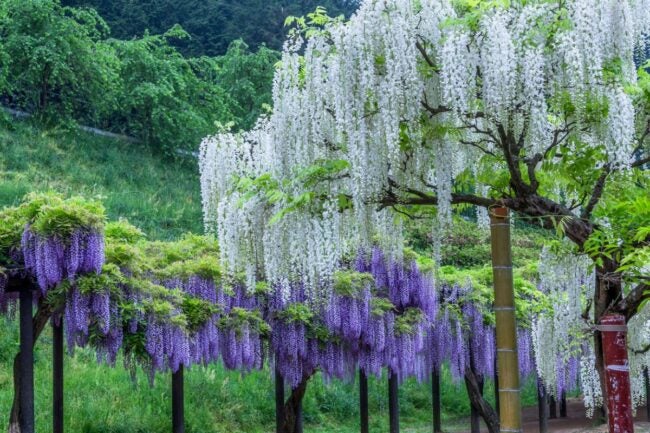 Wisteria, with its grape-like clusters of usually purple blooms, often is identified with the South. However, hardy wisteria varieties such as ‘Blue Moon’ can grow as far north as USDA Zones 3 or 4, though late frosts may freeze flower buds there.

Of course, advice on how to grow wisteria wouldn’t be complete without the warning that it is a vigorous vine, which can grow 10 feet or more per year, and therefore should be kept where it can’t strangle other garden plants. If possible, choose native types of wisteria rather than Chinese wisteria, since the latter is particularly invasive and listed as a “noxious weed” in some states.

RELATED: 34 Amazing Plants That Are Native to North America

Growing Wisteria at a Glance

Climbing wisteria vines can grow from 20 to 100 feet long—or as far as they are allowed to spread—and survive for 50 years or more. In spring or early summer, they produce pinnate leaves and grape-like clusters of sweet-pea-like flowers. Wisteria colors are most commonly shades of purple, but they also may be white, pink, or red. Their scent has been compared to that of grape bubblegum.

The flowers of Chinese wisteria appear in mid-to-late spring before the vine leafs out, while Japanese and native American types wait to perform until foliage also emerges in late spring to early summer. On Chinese cultivars, all of the blooms in a raceme open at once, while on most other varieties they open gradually, beginning with a wisteria flower at the top of the cluster. Vines of Japanese cultivars twine clockwise around supports, while most other types of wisteria grow counterclockwise.

If at all possible, purchase a plant that already has bloomed, thus proving it is mature enough to do so. Make sure it is a grafted plant or one grown from a cutting, since seedlings can take 5 to 20 years to bloom.

When is the best time to plant wisteria?

Set a wisteria plant out while it still is dormant in the spring or after it has gone dormant in the fall, keeping in mind that spring planting of perennials usually is safest in northern zones. Be careful to select an area with the proper wisteria growing conditions, as the plant doesn’t like to be moved once it is established.

Where can wisteria grow?

Choose a location where the soil is slightly acidic, well draining, and only moderately fertile—too much nitrogen can encourage vigorous foliage growth at the expense of flowers. The planting site should receive at least 6 hours of sunlight per day, preferably more, and include a support of some sort, such as an arbor, pergola roof, or horizontal wires on which the wisteria can spread out about 10 feet up from its base.

How do you plant wisteria?

Be sure to plant your wisteria vine where there is no chance of it escaping into the wild, since it can be highly invasive.

Can you grow wisteria in containers?

One of the smaller wisterias, such as the American species, should be able to grow in a container, as long as it has some type of trellis to support the wisteria in the container or nearby. However, if you plan to leave that container outside—which probably will be necessary since outdoor plants that go dormant during winter don’t make good houseplants—your wisteria should be listed as hardy at least two zones north of your own zone to be able to survive above-ground conditions.

RELATED: How to Prune a Tree

A wisteria plant will require an average amount of water, about 1 inch per week, to thrive. If your climate doesn’t provide enough moisture for growing wisteria, you might need to provide the equivalent yourself via irrigation or a watering can.

Mulch the plant with a couple inches of chopped bark so that the soil will retain some dampness at all times. However, avoid overwatering it, which will encourage the kind of lush foliage growth believed to inhibit flowering.

Wisteria plants usually grow rapidly enough without supplemental feeding and can acquire all the nutrients they need from the soil; container-grown plants might need boost. If you must fertilize your wisteria, do so only once a year in spring and use a high-phosphorus type of fertilizer—such as a bloom booster rose food—instead of a high-nitrogen one. Too much nitrogen may cause the plant to put all its energy into overly extensive foliage production and “distract” it from blooming.

Prune wisteria after it finishes blooming in summer. Shorten the shoots to about 6 inches so that each one contains only two or three buds.

To turn a wisteria vine into a tree, plant it next to a stake and train a single shoot up the stake as a trunk, removing all of the other shoots. The following year, cut the top of the trunk off at the top of the stake to force the tree to branch out there. Such wisteria trees will require constant shaping.

A mature wisteria vine will root wherever it touches the ground. So, the easiest way to get a new plant is to pin a shoot down to a bare patch of soil in a process called layering.

When considering how to grow wisteria from seed, keep in mind that a seedling usually takes 5 to 20 years to grow into a vine capable of blooming. If you still want to try germination, soak the seeds overnight before sowing them ½ inch deep. Keep their container at about 60 degrees Fahrenheit until you see sprouts, which often takes 30 days or more.

Make sure that the wisteria structures on which you train your vines, such as pergolas or porch roofs, have strong supports. The vines can grow very heavy over the years, so much so that they can buckle posts that aren’t sturdy enough to bear all that weight.

These vines also are toxic to people, pets, and horses. The seed pods and seeds—which make popping noises when opening—reportedly are the most poisonous part of wisteria. So, it’s a good idea to remove those as soon as they appear, so children won’t be tempted to sample the “beans.”

RELATED: The 25 Most Dangerous Plants for Your Pet

Being such vigorous vines, wisterias seldom suffer from pests and disease, so their most complained-of problem is barrenness, a refusal to bear flowers. This tends to happen most with Chinese wisteria, since it takes longer to reach maturity than native varieties do.

If a wisteria declines to perform, even after receiving above specified fertilizing and pruning, try root pruning in autumn. For that, use a shovel to “draw” a circle a few feet out from the vine’s trunk, then plunge the shovel’s blade at least 10 inches into the ground all around the perimeter of that circle. Pruning the roots causes the plant to go into survival mode and increase flower (and therefore seed) production.

If you are gardening in a northern state, it is a good idea to plant a wisteria against a building wall. This actually isn’t to protect the plant—which will usually survive winter without any problems if it has enough mulch—but to shield its flower buds from late spring frosts. Be careful, however, that the vines don’t work their way under siding.

Should your wisteria be growing in a pot, once the plant has gone dormant in autumn, move the pot into an unheated shed or garage for the winter, making sure that its soil remains damp during that time.

All You Need to Know About Soil Types
Advertisement

14 Houseplants That Grow in Water, So You Can Ditch the Dirt

10 Climbing Plants That Are Easy to Keep Under Control

13 Plants You Never Knew Were Weeds