How To: Put Out a Grease Fire

These kitchen conflagrations are serious, and taking the wrong action can make them worse! Learn the right moves here. 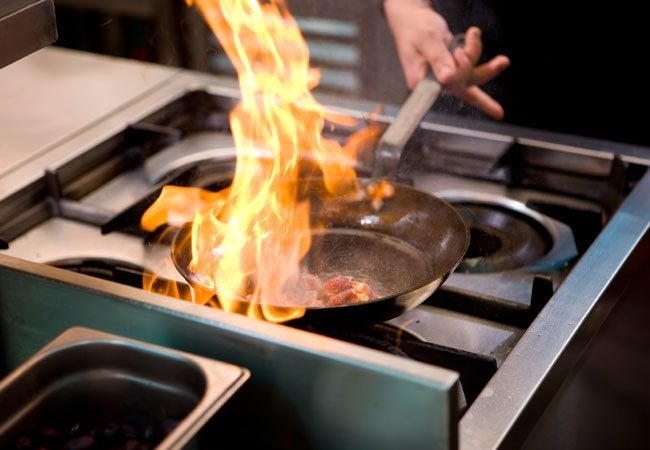 Not to scare you into ordering takeout more often, but more home fires are caused by cooking mishaps than anything else—and these cooking fires lead to more injuries than any other type of residential fires, according to the most recent United States Fire Administration data. Especially dangerous are grease fires, responsible for one out of every five at-home fire deaths. Knowing what causes this particular flame to form and how to put out a grease fire quickly could actually save your life.

More than 60 percent of grease fires occur on the stovetop, when fat or oil hits boiling state, then starts to smoke—and can predictably catch fire soon after. So the first and most important rule to preventing grease fires is to never leave a pan unattended: Simply stepping to the pantry while you’ve got a slicked-up pan on the heat could lead to big trouble.

The smoking point ranges from 375 to 450 degrees Fahrenheit, depending on the fat or oil in question, but the first sign of smoke indicates the danger zone.

If a grease fire does start, never, ever douse it with water or any other kind of liquid in an attempt to extinguish it. Liquid vaporizes as it hits fire, instantly creating steam explosions in all directions and potentially engulfing a kitchen in flames. So cook with care, and keep the following information in mind—and supplies on hand—so you can stay cool should a grease fire ever ignite.

How to Put Out a Grease Fire

For a grease fire contained on the cooktop, turn off the stove immediately if you can safely reach it. Do not attempt to move the pan. Movement can cause the fire to get stronger and grow faster. If the fire has spread beyond the cooktop to anything nearby—curtains, counter, cupboard, wall—do not attempt to get near the stove. It takes less than five minutes for an entire room to become engulfed in flames, so grab your phone and leave the area, closing the door to contain the fire. Get out of the house and call 911.

If the fire is in the oven or microwave, do not open the door—that would cause oxygen to rush in and create a flame surge. Instead, turn off the appliance immediately and move to Step 5, calling 911.

If a small fire is contained within a pan, throw as much baking soda or salt as you have on hand directly on top of the fire. Do not throw flour, biscuit mix, or baking powder onto the flames, as all these substances are combustible; only salt and baking soda are safe for extinguishing a fire.

Do not throw salt or baking soda onto the flames from the side, which could cause the fire to leap out the back of the pan and catch elsewhere. Do not swat the fire with towels or an apron, which could also cause it to spread.

If salt or baking soda fail to quell the flames and you own a class K fire extinguisher, continue to Step 3; homeowners without a class K extinguisher should skip to Step 4. If the fire has been fully put out by salt or soda—no more flames or smoke visible—air out the room and proceed to cleanup.

Only a class K fire extinguisher can put out grease fires; other types contain water or other agents that could worsen the fire. The class K extinguisher will contaminate your kitchen and make for a huge mess, but if it’s a choice between a tough cleanup job and your house burning down, go for it! To use the fire extinguisher, remember P.A.S.S.: Pull the pin, aim the nozzle, squeeze the lever, and sweep the flames.

If smoke or visible flames continue to come from the pan, cover it with a metal lid or cookie sheet to deprive the fire of oxygen. Never put a glass or ceramic lid, bowl, or plate over a grease fire; these could explode and become shrapnel, injuring you in the process. Should you need to adjust the lid or sheet, use metal tongs or a spatula—not cloth mitts or a kitchen towel, which could ignite. Once there’s no evidence of flames or smoke, move on to Step 6.

If you’ve covered the fire and it’s still actively smoking, leave the area, close the door, and go outside. Call 911 and report a kitchen grease fire. You’ll be asked what the flames are doing and what you’ve done so far, as the fire department is dispatched. The dispatcher, trained to confront fires of all kinds, may instruct you to take other fire-mitigating steps, so stay on the phone and follow the course of action. The dispatcher may ultimately cancel the response call if the situation is deemed safe.

Once you know the fire is out (911 dispatch will help you ascertain this safely, but a lack of new smoke is a good indicator), air out the kitchen by opening windows and doors. When the kitchen is smoke-free, breathe a sigh of relief. You’ll have a long day of cleanup ahead, but you saved your home, and yourself!

TAGS:
HOW TO
MAINTAIN
KITCHEN
SAFETY
More From Bob Vila

6 Types of Fire Extinguishers Every Homeowner Should Know

How to Start a Fire in a Fire Pit