The Surprising Benefit of Opossums All Homeowners Should Know About

Forget what you think you know about opossums. They’re not the nasty, trash-eating troublemakers that some folks make them out to be, but remarkable creatures that provide valuable services, including pest control. Learn more about these misunderstood marsupials and how one of their habits can actually be helpful. 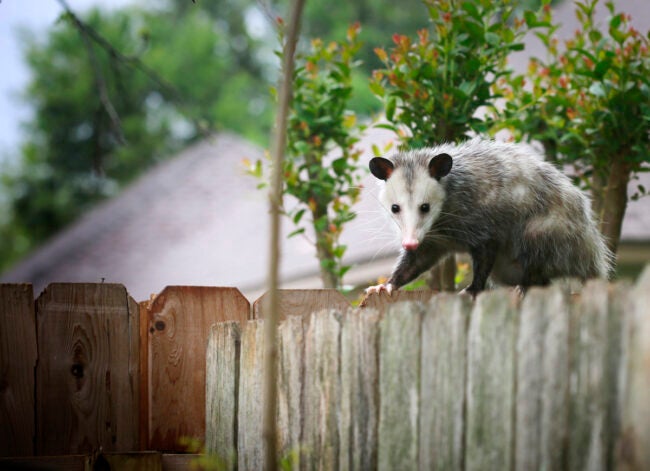 The opossum needs a new publicist.

This nocturnal animal—America’s only marsupial—is much maligned, but why? Is it the animal’s vaguely rat-like vibe? That unflattering (albeit funny) meme? Are we collectively creeped out by its beady eyes or naked, prehensile tail? Could it be the noxious smell that an opossum emits while “playing possum” to avoid becoming prey, or its unfortunate association with overturned garbage bins?

Whatever the reason for the opossum’s bad reputation, the hate is misplaced. Turns out, the humble opossum is actually something of an unsung hero—for several reasons, including one that truly benefits human health. Read on to find out why these creatures should be considered friends, not foes.

Contrary to popular belief, opossums are clean, gentle, and downright neighborly. If opossums wore clothing, it’s a good bet that they’d choose zip-up red cardigans and navy blue sneakers. They don’t ravage chicken coops, attack cats, ransack trash cans, or raze gardens. But they are opportunistic scavengers. So while they won’t start a fight or slay for their supper, these omnivores will happily partake of the spoils after another animal does the dirty deed.

Like the dweeby protagonist of a John Hughes movie who takes all the flak for a kegger while the jock gets off scot-free, the opossum’s habit of cleaning up after other critters often goes unrecognized. Even worse, it gets punished for making a mess of a backyard flock or a garden plot in a classic case of wrong place, wrong time.

When it comes to smaller life forms, though, opossums will kill and cheerfully consume mice, rats, snails, and slugs. Additionally, they offer a surprising but beneficial service: chowing down on any windfalls that litter the ground under a fruit tree.

Many folks think leaving fallen fruit where it lies is essentially an act of automatic composting, but left undisturbed, rotting fruit can cause real damage to your backyard ecosystem. Not only could it spread damaging brown rot to trees, but it attracts earwigs, fruit flies, and other bothersome bugs.

Best of all, opossums have a taste for ticks. Their long, pointy snouts make them a veritable cordless vacuum when it comes to these disease-spreading vectors. In fact, they can eliminate an astonishing 95 percent of ticks from the immediate environment. That adds up to some 5,000 insects per opossum, per season.

Lyme disease, a devastating and often debilitating bacterial illness, is transmitted through the bite of two species of black-legged ticks. In hoovering them up like so many delicious hors d’oeuvres, the opossum is doing humans a serious solid.

According to estimates by the Centers for Disease Control and Prevention, approximately 476,000 people in the U.S. are diagnosed with Lyme disease each year, many of them long after the initial infection. Especially when undetected and therefore left untreated, Lyme disease can result in extreme fatigue, joint pain and swelling, neurological issues such as meningitis, and even heart problems.

So the next time you’re investigating some suspicious backyard action and your flashlight catches the glint of an opossum’s eye, whisper your thanks to this gentle, beneficial beast—and let it be.

RELATED: Solved! What to Do When You Find Ticks in the House

10 Types of Bees All Homeowners Should Know
Advertisement

The 21 Most Stunning Fireplaces on the Internet

12 Confessions of a First-Time Home Seller