Are You Prepared for Tornado Season? Mark Your Calendars

Find out the most likely time of year that a tornado might occur in your region. 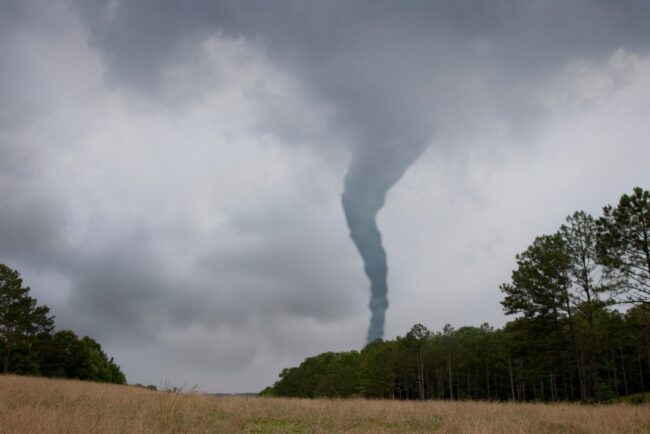 Tornado season is known as the time of the year that the U.S. sees the most tornadoes, and it can differ depending on your location. So, when is tornado season? In general, tornado season usually begins in March and lasts until June.

Tornadoes are a common occurrence across the United States because of the country’s unique geography that makes it easy for hot, humid air to move quickly from the Gulf of Mexico up into the southern plains region, which is also referred to as Tornado Alley. Tornado preparation is key because tornadoes can form anywhere, not just in Tornado Alley.

The frequency of tornado occurrences changes throughout the year because current temperature and climate affect tornado formation. Changing temperatures throughout the day also can increase the frequency of tornado occurrences between the hours of 4 p.m. and 9 a.m. However, tornadoes can and do occur at any time of the year and any time of day, which is why it’s a good idea to prepare for these weather events with tornado window shutters, a tornado prep kit, and a tornado safety plan.

Related: 15 Things You Should Have at the Ready in Case the Power Goes Out

Early spring is peak tornado season for the Gulf Coast area of the United States.

Due to the southern location and proximity to the Gulf of Mexico, the Gulf Coast area of the United States experiences peak tornado season in the early spring, from about March through May. However, the Gulf Coast also has a high incidence rate of tornadoes in the late fall from October to December, so it’s important to always be prepared with tornado shutters and tornado survival kits in a safe shelter, like a basement.

May through early June is considered tornado season for the Southern Plains region.

Known as Tornado Alley, the Southern Plains region of the United States, including Kansas, Oklahoma, and Texas, has the highest frequency of tornado occurrences from May through June. The main cause for tornadoes in this region is the warm, humid air rising up from the Gulf of Mexico and moving swiftly over the flat plains. Without geographic barriers to slow the weather system, it rapidly meets the cool, dry air in the region creating ideal conditions for storms and tornado formation.

The transition from cooler spring weather to the heat of summer also plays a role in determining when it’s the most likely for a tornado to occur. This is why tornado season in this region is from about May to June, though there can also be an increase in tornado formation in the early fall, so you should always be prepared.

Related: 10 Things You Should Never Do When the Power Goes Out

In the Upper Midwest and Northern Plains regions, tornado season is June through July.

As the warm air from the Gulf continues to move through the center of the United States and over the Southern Plains region, it comes in contact with cool air in the Upper Midwest and Northern Plains regions, including Iowa, Minnesota, and Nebraska. These areas experience tornado season during June and July when the weather starts to turn from cool to hot.

Keep an eye out for severe thunderstorms and mixing weather systems as part of tornado preparation. Supercell thunderstorms are prone to tornado formation because they contain a vortex at the center that can grow in size quickly if there is a substantial amount of warm, moist air to mix with the cold, dry air in the region.

The cold air is pulled toward the ground as the warm air is siphoned upward. With enough weight and speed, the air becomes a powerful funnel that touches the ground to create a tornado.

Tornadoes tend to occur in the evening.

So, while tornadoes can happen anytime throughout the day, they are statistically most likely to occur from 4 p.m. to 9 p.m. because this is when the hot, humid air of the day begins to cool, creating an ideal environment for tornado formation.

However, this “rule” does not remain consistent across every part of the United States. Some locations, like New Orleans, do not have a peak time throughout the day. Instead, tornadoes are just as likely to occur at 3 a.m. as they are at 5 p.m., so it’s important to research your specific geographical location to make sure you have the correct information for the region.

Related: Keep the Power Going: 8 Types of Generators All Homeowners Should Know

Tornadoes, hurricanes, and other severe weather can happen any time of the year. To make sure that you are ready in the case of an emergency, it’s important to understand the difference between a tornado watch and a tornado warning.

10 Ways You're Accidentally Sabotaging Your Garden

The 6 Best Reasons to Remodel Your Bathroom