The Weird History of Witch Windows

Remember the folk tale (or the folk song) about the “crooked little man” and his “crooked little house”? When you travel through Vermont, he might come to mind thanks to the many crooked windows adorning area farmhouses. Turns out they’re called witch windows—but why? And why are they so common in New England? 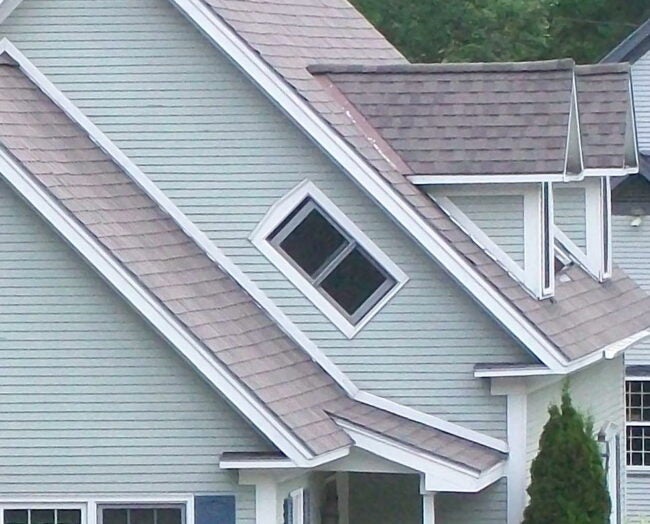 Q: On a recent road trip to see New England’s glorious fall foliage, my wife and I noticed a number of farmhouses with funny, full-size windows tilted at a 45-degree angle. What are they, when did they become a common part of Vermont homes, and why are they tilted like that?

A: These are witch windows. This uniquely northeastern architectural feature sounds like an old vaudeville shtick: “What are those weird windows called?” “Witch windows.” “Those windows, right there!” But these apertures have an interesting history that’s worth taking a peek at.

Although they can be found in other areas of New England, the majority of these curious features are found in the Green Mountain State—in fact, they’re also referred to as Vermont windows.

Witch windows date to the 19th Century, when much of the state comprised rural, even isolated farming communities. Even today, Vermont is known for its small towns and slow pace. Its biggest city, Burlington, is home to only 43,000 residents; tiny Montpelier, with a population below 8,000, is the only U.S. capital that doesn’t have a McDonald’s.

For the folks who farmed this land, it was second nature to renew, reuse, recycle any- and everything (well before that phrase even came into being). That includes windows, with their valuable glass and hardware. As a result, these oddly angled openings remain as a structural reminder of Yankee ingenuity.

RELATED: Solved! How Can I Find the History of My House?

Folklore has it that the angled windows prevent witches from entering the home.

New England has never been an especially welcoming place for witches. Their association dates to the colonial era, way back when the Pilgrims and Puritans first stepped foot on our continent, and—well, suffice it to say that witches and churches did not enjoy the most harmonious affiliation in history.

So why is there a window named after them?

It turns out that witch windows aren’t intended to benefit the broomstick-equipped crones of fairy tale lore, but are actually meant to thwart them. Witches don’t have the capacity to tilt their conveyances 45 degrees, so the tilted design keeps them from flying into the home. (Apparently, witches don’t even have enough brain capacity to recognize the many perfectly vertical windows through which they could enter, either.)

Some refer to it as a coffin window.

Another term for this quirky feature is “coffin window.” Say someone dies on the second floor of the home; it would be much easier, proponents of this nomenclature propose, to slide a coffin out of a slanted sash than to take it down narrow staircases and out the front door.

This might make sense at first glance, but when you think it through, the coffin-transport theory falls apart. Where is the coffin supposed to go once it’s been defenestrated? You can’t just send it sliding down the pitch of the porch roof and expect it to land intact. For that matter, why lug a coffin to the second floor in the first place, when you could just carry the body downstairs? We call nonsense on this macabre explanation.

RELATED: 15 Old House Features We Were Wrong to Abandon

The real reason behind witch windows is a bit more practical.

Farmers, and perhaps especially New Englanders who farm, are a practical lot—so the real reason for witch windows is probably a prosaic one. Their standard size and shape would have been a lot easier to come by when expanding an existing home, than a custom-built window would’ve been, and to fit them in between narrowly placed adjacent rooflines, they had to be tilted. They could have been pressed into service after being salvaged from another structure. Remember, we’re talking about construction that took place around 200 years ago, when rural people were extremely averse to waste of any kind.

Bolstering that origin story is the fact that daylight was a fairly scarce resource in Northern states and many of these homes were constructed well before the advent of electricity. The more windows a farmhouse had to let in the precious light, the better. Witch windows provided as much illumination as possible in that particular spot.

Have you ever seen a witch window in person, or lived in a home that had one? Do you have any theories of your own that we haven’t discussed here? Chime in on our Facebook page and share your experience!

14 Types of Windows Every Homeowner Should Know
Advertisement

8 Zen Garden Ideas for Peace and Relaxation at Home

10 Great Tools to Give Your Recent Grad