The Basic House is an elemental style whose simplicity and practicality are to be respected. 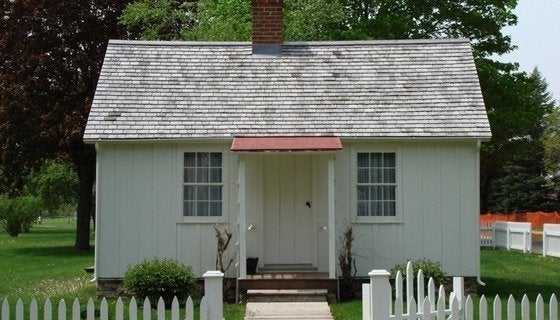 The generic, early American house is known by many names, among them the English Medieval House, the Cape Cod, the saltbox, and the double-pen log cabin. While each of these differs in detail from one another, they are simple, rather plain houses that collectively represent America’s most enduring house designs.

Seventeenth-century settlers arriving from England adapted the Medieval cottages they had known at home to conditions in America. The earliest houses consisted of one room with a hole in the ceiling to allow the smoke from the fire to escape. A chimney was soon added on an end wall; the addition of a second room came next. This new configuration was called the “hall-and-parlor house” because the two principal rooms were a “hall” for cooking, eating, and working and a more formal “parlor” used as a master bedroom. Later, larger versions often had a narrow kitchen to the rear of the two front rooms, a one-and-a-half room deep configuration we know as the Cape Cod house. Early log cabins typically followed a similar evolution, with a single unit or “pen” followed by chimney construction and the addition of a second pen.

Building the Basic House was (and is) quite simple, with a shoebox-shaped first floor and a plain gable roof rising from the front and back. As originally laid out, these houses consisted of living areas downstairs and unfinished sleeping or storage spaces above in the tall attic. While these boxy houses have never gone out of favor, the range of variations on the original theme multiplied with the passing decades.

Because of the harsh climate on this side of the Atlantic, the Basic House in New England typically had a central chimney stack that contained two or more fireplaces. This functional design provided a masonry mass that absorbed the heat from the open fireboxes and radiated warmth to the entire house. In Virginia and other southern states, a variation evolved with chimneys in the end walls, in order to dissipate unwanted heat in the warmer southern climate.

Over the centuries, the Basic House assumed still more guises. The earliest Basic House probably wasn’t symmetrical—that is, the entrance was not at the center of the front of the house and the number of windows flanking the door on either side often differed. By the early eighteenth century, however, symmetry had become standard. These houses were originally found in rural settings surrounded by farm buildings. In New England, the bam and the house over time came to be connected by shed buildings, producing a progression of linked structures off the back of the main house.

REMODELER’S NOTES. In remodeling a Basic House, it’s important, first of all, to be sure that your house isn’t actually a Georgian House, a more refined and decorated style common in the eighteenth century. The configuration I like to refer to as the Classic Colonial, for example, is a two-story, two-room deep house with a center entrance and five sets of openings across the front. The Classic Colonial is, however, a descendent of the Georgian House rather than being a Basic House. Some Victorian styles, too, apply different detailing to the same volumes as the Basic House.

In thinking about your house, don’t forget whence the inspiration came: Primarily English settlers arrived in America in need of simple, economical shelter. I visited a house a few years ago on Cape Cod. Its owner told me it had started life as a ship captain’s house in the eighteenth century. I don’t know about the ship captain, but the handmade nails, the hewn frame, and other details told me the house had been built about the time of the American Revolution. The rooms in the original house were small but comfortable, which made the addition its owner had built all the more shocking. It was essentially one great room, with a handsome coffered ceiling, bold cornice moldings, and tall windows. It was a lovely room—but it didn’t relate in any way to the original house. It was as incongruous as a Wall Street investment banker would be if he wore sneakers with his gray flannel.

Basic Houses consist of four walls and a pitched roof to shed the rain and snow. Their builders may have added paneling, moldings, or other trim to decorate the house but the enduring appeal of these houses comes not from the way they echo other styles and cultures. These are elemental houses whose simplicity and practicality are to be respected.

15 Ways Presidents Made the White House Feel Like Home
Advertisement

12 Fresh Ideas for Your Kids' Room