Sometimes referred to as an American Bracket house, the Italianate style is distinguished by brackets that decorate the eaves. 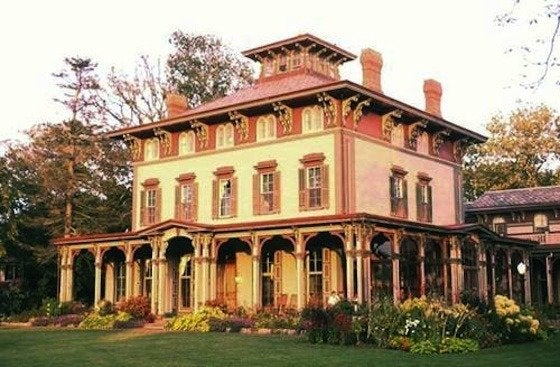 Alexander Jackson Davis and Andrew Jackson Downing, the men who helped launch the Gothic Revival, also did their bit in developing the Italianate House. Beginning in the 1850s and extending into the 1870s, this style was used in all sorts of buildings across America. The Gothic Revival never quite rivaled its contemporary, the Grecian Style, in popularity. But the Italianate House succeeded the Greek as the most popular style of its day

Houses described as Italianate are actually a diverse mix of shapes and sizes. Most were tall, typically two or three stories (one-story examples are rare). As with the Gothic Revival and later Victorian styles, there’s more of a sense of upward thrust about Italianate houses. Yet there’s also an attempt to emphasize a solid, massive quality consistent with the houses that inspired them, those being stone-and-stucco villas back in the Old World countryside, especially in the Italian province of Tuscany. In wood examples, the walls were sometimes painted or scored to resemble masonry; brownstone came to be commonplace on Italianate houses built on cityscapes. Stucco was also used to give the feel and character of stone.

An alternative and perhaps more immediately descriptive name for the several varieties of Italianate house is “American Bracket.” This designation derives from one of the key architectural elements typical of the American Italianate House, the brackets that decorate the eaves. Deep overhangs distinguish all Italianate houses, and the supports for those eaves are brackets that came in a wide variety of shapes and sizes. The brackets are consistently found in the Italianate house, though the overall shapes of different Italianate houses vary considerably.

The type usually called “Italianate Villas” have octagonal or square towers attached to them. Other Italianates, essentially cubes with cupolas protruding from the centers of their roofs, are usually referred to as simply “Italianate.” But American Bracket houses are found in other configurations, too, with their brackets applied to the familiar volumes of the Basic House and the Classic Colonial.

A gentle roof pitch is typical of the Italianate House. Tall, narrow windows with only two panes of glass per sash (2/2s) are usual. Arch-topped windows are also common, typically with molded crowns. The entrance ceased to be the dominant element and often was recessed slightly into the volume of the house. But it was still decorated with handsome trim and often featured a double door. For the first time, some of the doors had panes of glass in them. Many Italianate houses were asymmetrical, featuring towers, ells, bay windows, balconies with balustrades, and verandas. Virtually all Italianate houses were built with porches.

REMODELER’S NOTES. As Downing himself wrote, the Italian style “… has the very great merit of allowing additions to be made in almost any direction, without injuring the effect of the original structure; indeed such is the variety of sizes and forms, which the different parts of the Italian villa may take, in perfect accordance with architectural propriety, that the original edifice frequently gains in beauty by additions of this description.” That’s a good rule of thumb, though in the case of Italianates that are basic symmetrical boxes, a bow to symmetry is still in order.

The tall windows and high ceilings of Italianate houses make them gracious homes, though in northern areas they are more expensive to heat than their lower-slung predecessors. That’s one reason dropped ceilings were once commonly inserted into Italianates. But that was a bad idea, and is best undone. Added insulation, tightening up the windows, and other energy efficiencies can help compensate without sacrificing the style and grace of the taller room spaces.

These houses often have fine old woodwork: handsome staircases of imported woods like mahogany or native cherry and walnut. Moldings tend to be large and bold, and heavy plaster cornices are common. These are elements to be valued and preserved.