Drawing from European Gothic, the Stick-Style House is best known for its decorative geometry. 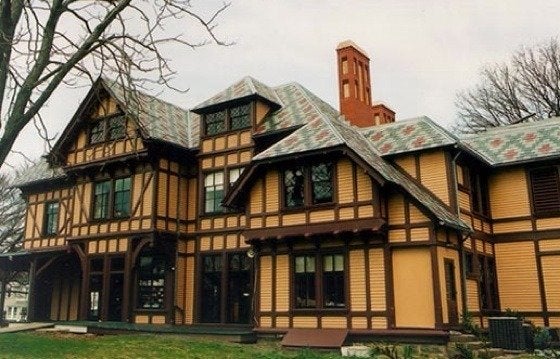 The origins of the Stick Style are European Gothic, but an American architect named Richard Morris Hunt actually developed the style in America. Hunt had studied in France at a time when a revival of half-timbered architecture began, inspired by the restoration of Medieval German towns. The exterior walls of those houses consisted of an exposed frame of horizontal and vertical timbers, with an in-fill of stucco or masonry in between. The Stick Style House didn’t replicate the Medieval half-timbered house (the later Tudor Style came closer), but reinvented the decorative geometry and adapted it to commonplace American materials.

In three dimensions, the shape of the Stick Style House is relatively uncomplicated, with plain gable roofs, perhaps with a second cross gable, and occasionally with a tower. In keeping with Gothic precedents, the roof pitch tended to be steep. Yet it is the two-dimensional wall surface that truly distinguishes the Stick Style House.

The exterior walls of these houses were an opportunity for their builders to display both their skills and their excitement at the proliferation of building materials. A variety of economically priced factory-made materials was suddenly put on display all at once—the growing network of railroads, which delivered precut architectural details all across the country, deserves some of the credit for making this highly decorated style possible.

The inverted-V of the gable typically has a decorative truss. The walls are crisscrossed with patterns of wooden bands (the “sticks” from which the name of the style is derived) that divided the wall surfaces into separate areas. These are in-filled with clapboards and shingling, which were often painted in a range of colors to draw attention to the display of materials. When the materials changed, often the colors did, too. Porches had decorated galleries and posts; windows were tall; double doors at the entrance were the rule.

The Stick Style House is an exuberant expression of building energy. San Francisco’s “Painted Ladies” are perhaps the most famous examples of the Stick Style and of the related Queen Anne style that was to follow (see below).

REMODELER’S NOTES. These durable wood-frame houses look their best when polychrome paint jobs draw attention to the variety of elements. Painting in multiple colors can be prohibitively expensive when contractors do the work, but the energetic homeowner who brings a little painting skill and a lot of enthusiasm can greatly enhance the look of one of these houses.

How to Recognize a Bungalow Style House

This Popular House Style in Chicago Is Going Extinct