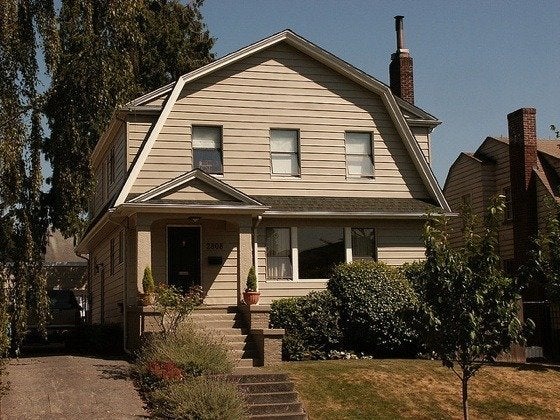 Most houses that survive from the Colonial era—such as early Capes, Saltboxes, and Georgians—are descendants of English styles. But in some regions of the country, settlers originating in other lands put to use the building traditions they knew to cre­ate distinctly different homes.

Consider the Dutch Colonial. This house is a variation on the theme of the Basic House, but there are important differences. The Dutch were known as the Old World’s best masons, so not surprisingly many Dutch houses built in America between the seventeenth and early nineteenth century were constructed of brick or readily available local stone. The Dutch colonized much of New York’s Hudson Valley, as well as portions of New Jersey and Pennsylvania, so it is in those areas that the majority of early Dutch houses survive.

When you think of a “Dutch Colonial house,” perhaps the image that comes to mind is of a gambrel roof, in which the plane of the roof on both sides of the central ridge is broken roughly halfway down, with the lower half of each side falling at a steeper pitch toward the eave. In fact, gambrel roofs aren’t uniquely Dutch, though when the style reemerged in the suburbs of twentieth-century America, the gambrel roof had become standard in the Dutch Revival jouse. In contrast, the prototypical Dutch house in early America was one-and-a-half stories tall with a steep gable roof that flared toward the eaves. Such “sprung roofs” provided deep overhangs, often covering open porches.

REMODELER’S NOTES: Another construction detail that distinguishes the early Dutch house from the Cape and other English-inspired homes of the era is the design of its wooden skeleton. All these houses have a timber frame, but in Dutch houses there are more beams traversing the ceilings downstairs. Typically, these ceiling beams are spaced about four feet apart and they have been planed smooth. Unlike the unplaned structural timbers in English houses, the ceiling beams in Dutch houses were intended to be left exposed. In Dutch houses where the ceil­ings beams were covered in latei renovations with boaids 01 lath ana plastei. your renovation might reveal those early beams, both to restore the original appearance and to add character to the space.

FDR's "Real" Springwood on the Hudson