Decipher the meaning of these common dash light symbols to stay safe on the road. 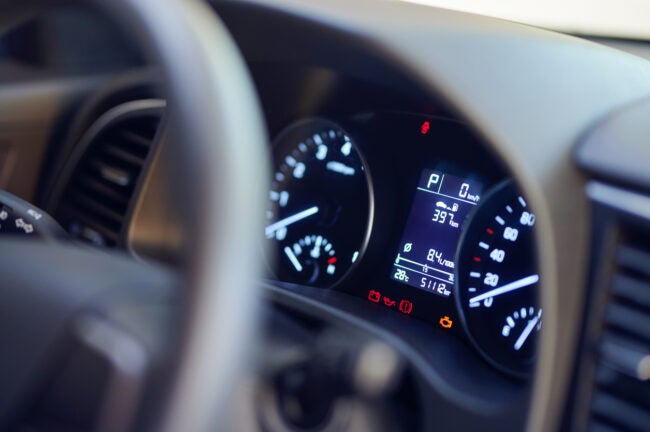 Any licensed driver should know that every vehicle comes with a series of symbols on the dash that help to communicate to the driver various problems or changes in the function of the vehicle. However, if your last driving test was more than a decade ago, you may be a little rusty on the dash light meanings. Learning or relearning car light meanings is necessary to ensure that you can respond to an emergency situation as soon as a dash symbol appears.

Some safety lights in the dash inform the driver of potential problems with the car, like a battery warning or oil pressure warning, but other dashboard lights express changes in how the car is operating so that you as the driver can adjust to the change in function. An example of this active change is traction control, which helps the tires grip slippery pavement while you drive. Refresh your memory of these car light symbols and more important car warning lights below.

The battery warning light is relatively easy to decipher. It’s usually red and it looks like a standard car battery with a plus and minus symbol on either side. This is an indicator meaning that something is wrong with the vehicle’s charging system. Though the symbol is of a battery, it should be noted that the issue could also be with the alternator, a corroded battery cable, or any other fault in the electrical system.

It’s important to pull over and stop the car as soon as it’s safe to do so if you see this light. Call a tow truck and have your vehicle checked out by an automotive professional. If you don’t pull over, then it’s likely that the engine will stall when the battery drains, leaving you to coast to the side of the road, if it’s safe, or be stuck in the middle of the road.

RELATED: The Best Places to Buy a Car Battery

The engine temperature warning symbol is depicted as a red thermometer that indicates the engine is overheating when it lights up. Pull over immediately and have the vehicle towed to the nearest mechanic for assessment and repairs.

The transmission temperature warning symbol is typically a yellow or red thermometer that is surrounded by a gear. Similarly, when this light turns on, you need to pull over to prevent serious damage to the transmission of the vehicle.

The oil pressure warning light can come on if there are low oil levels, a worn oil pump, a leak in the oil pan, or if there are any other worn internal components. When you see an illuminated red oil can, that indicates there is a problem with oil circulation throughout the engine. Therefore, it’s important to check the oil levels and inspect the vehicle for any leaks or obvious problems.

The car symbols in the dash are essential for preventing further damage to the vehicle once a problem has been detected, so if you can find the issue, it’s best to take the vehicle to a professional mechanic to assess and make repairs. Keep in mind that driving a vehicle with poor oil circulation will lead to premature engine wear and could cause the engine to overheat or even seize up entirely.

If you aren’t familiar with the check engine light, then you’re likely one of very few drivers who can make that claim. This dash light is so well known because it comes on for any engine-related issue, including serious problems, like a loss of compression. It also can illuminate if the gas cap isn’t tight enough or let the driver know of other issues that have simple fixes.

The symbol is typically the outline of an engine that is either red or yellow. If you see this symbol, don’t ignore it. Check the car for any simple problems that could be causing the warning light to turn on and if you don’t spot anything immediately, book an appointment to have a mechanic diagnose the issue.

A red circle with an exclamation mark or a capital “P” in the center is the brake warning symbol. This dash light can be illuminated because the parking brake is still engaged, or it may be indicating a problem with the braking system. Engage and release the parking brake to see if this turns the light off. If it doesn’t, then have the vehicle towed for repairs because it might not be safe to drive.

The anti-lock braking system has its own dash light depicted as the letters “ABS” in the center of a red or yellow circle. Issues with the ABS system can cause reduced braking performance, so it’s a good idea to have the vehicle checked out as soon as you can. Possible causes for the brake warning or ABS warning light to come on include a faulty wheel speed sensor, worn brake pads, a problem with the ABS controller, or even low brake fluid levels.

Easy to recognize as a red or yellow exclamation point in the center of a vehicle tire, the tire pressure warning dash light usually means that the tires are under- or overinflated. Modern vehicles can be equipped with individual tire pressure monitoring systems so the driver can check the pressure of each tire to ensure that it is balanced. If you don’t have this system in your vehicle, you will need to check the tire pressure manually.

If this light comes on while you are driving, pull over and check for any flat or severely underinflated tires. Use a tire pressure gauge to ensure the tire pressure meets the recommendations for your vehicle. The owner’s manual will usually provide this information, and many gas stations have air pumps to inflate your tire. If the tire is flat, either call for a tow or jack the car up in a safe location and replace the flat with a spare tire.

RELATED: 14 Things You Never Thought to Keep in Your Car

If the gas cap is loose or if the vehicle is almost out of fuel, then the low fuel warning will come on to indicate to the driver that it’s time to pull over and fill up the tank. The symbol for this warning light is a yellow or red gas pump. Some vehicles may also have a navigation system that responds to the low fuel warning by automatically locating the nearest gas station and providing this information on the navigation display.

A yellow windshield icon with a small wiper blade depicted at mid-wipe is the symbol used to indicate that the washer fluid levels are low. This isn’t an urgent matter in most circumstances, though it can be hazardous to drive in the winter without washer fluid due to the amount of dirt and grime that gets sprayed up on the windshield in the snow. When you get the chance, stop at a gas station or any other store that sells washer fluid and fill up the washer fluid reservoir.

Seat belts are designed to keep the driver and passengers safe in the case of an accident, and if you aren’t wearing a seat belt you can be pulled over and ticketed. To help keep you safe and avoid tickets, the seat belt reminder light stays illuminated until the driver and any passengers put on their seat belts. The symbol for this dash light is the outline of a person wearing a seat belt.

The airbag or supplemental restraint system (SRS) is responsible for tightening the seatbelts and deploying the vehicle’s airbags in the event of an emergency. If the airbag indicator light comes on, then this means there is a problem with the SRS system that could prevent the airbags from deploying or even the seatbelts from tightening properly, putting the driver and any passengers at risk.

The airbag indicator symbol is usually a red airbag icon, but it can also be seen as the letters “SRS.” Get the vehicle inspected by a professional mechanic to determine the problem before resuming normal use.

There are several car lights that are simply used to inform the driver about the current function of the vehicle. The high beam light indicator is a blue headlight symbol that means the high beams are currently active. If you are driving in the city or toward another vehicle on a highway, it’s a good idea to turn the high beams off so you don’t blind others.

The security alert dash light symbol is a car with a key or a padlock. If a vehicle has a security system, then it may have a security light on the dash that will illuminate when the security system disables the ignition system to deter thieves. It also can blink occasionally just to show that the system is active. However, if the security light comes on while driving, then you may have a problem with the ignition system, so it’s important to have the vehicle diagnosed and repaired if necessary.

An automatic transmission system will not allow the driver to shift out of park unless the brake pedal is pressed down. The press brake indicator light is intended to signal to the driver that this system is active, and it’s usually depicted as a green foot inside a circle. Similarly, a manual transmission system may be equipped with a press clutch indicator that is depicted as an orange shoe inside an orange circle. Make sure to press the clutch when changing gears and shifting out of “park.”

Similar to the check engine light, the powertrain fault warning is a symbol that can turn on for various problems with the system, such as low voltage, a faulty oil cooler, or problems with the powertrain or all-wheel drive (AWD) system. It is depicted as a yellow wrench that’s easy to spot on the dash. Speak to a licensed mechanic to diagnose the issue and make any necessary repairs.

What Do the Numbers on a Tire Mean?
Advertisement

The 9 Best Types of Gravel for Your Driveway

The Best Places in America for Off-Grid Living