Wiring a light fixture or new appliance? Don't be confused by the number of electrical wire colors you find—we've got just the guide to help you decipher their color coding. 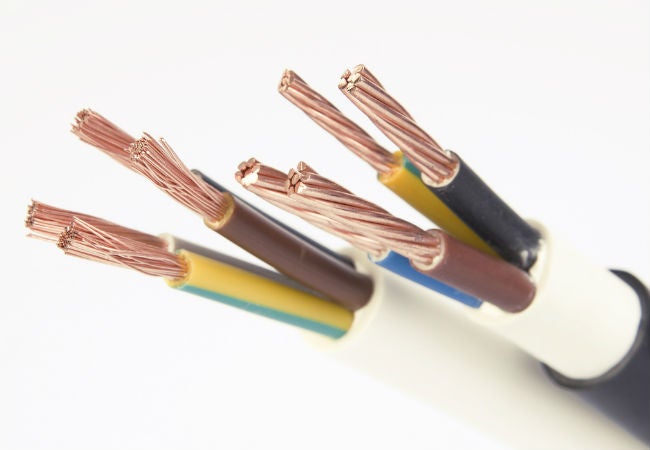 Q: I’m replacing the heating element in my electric water heater. The wires running to the element are black and white, but the white wire is wrapped with red tape. I’m confused—I thought white was always considered a “neutral” wire. What do these electrical wire colors mean, and what would the red tape indicate?

A: You’re right, white sheathing does generally indicate a neutral wire, but it’s not always so simple to decipher. In this case, your water heater is probably wired with two-wire flexible armor-clad “BX” or “MC” cable—that’s a factory-made cable with a metal jacket protecting a black, white, and bare copper wire. The hot or “live” conductor sheathed in black typically carries power to a 110-volt light or receptacle, while a neutral conductor would carry energy away and a bare copper ground wire can conduct any excess energy that might otherwise be a shock or fire hazard.

However, when sized appropriately for the load, two-wire armored cables can also be used to provide power to 220-volt appliances like a water heater or well pump, which is where things get tricky. Since those appliances don’t require a neutral but use two current-carrying conductors and a ground wire, an electrician may repurpose the white to carry the secondary phase (also called a “secondary leg”) of the 220-voltage. That’s allowed by code as long as the wire is marked with red or orange tape or paint to alert future service people, electricians, or knowledgeable do-it-yourselfers that the wire is not a neutral but rather a current-carrying conductor.

In newer homes, you’ll find more instances of types of electrical wires that would seem to disregard the traditional meaning behind electrical wire colors. That’s not a mistake: New constructions are often wired with pre-made cables and, while more convenient, they come in fewer wire color options. As seen with the electric water heater, electricians often have to repurpose the white wire to act as current-carrying conductors and should color-code appropriately depending on the new designation.

Before pre-made cables were the norm, though, electricians would run empty tubing between the main panel and the wall and ceiling boxes and filled the tubing with a variety of different wire colors like blue, red, orange, yellow, brown, and violet—a setup still seen in older homes today.

Green, green with a yellow stripe, and bare copper wires can only be used for grounding purposes.

A ground wire can never be used as a neutral, even though it connects to the same bus at the main panel—that’s a huge safety violation that can cause electrical shock, serious injury, or death. Still, many older homes don’t have neutral wires, and some inexperienced do-it-yourselfers will connect the white neutral wire from a new switch to the ground conductor to make do. Don’t make this mistake. If you see a ground wire connected to a current-carrying screw or terminal on a switch or outlet or to a white, black, or any other color wire, stop immediately and call an electrician to sort it out.

White and gray wires are normally used as neutral conductors.

The 2011 National Electrical Code required a neutral in every switch box to accommodate new devices like motion sensors, occupancy sensors, home automation switches, and dimmers. If your switch box doesn’t have a neutral wire, find a device that doesn’t require a neutral or have the box rewired by a professional electrician.

White and gray wires may be repurposed as current-carrying conductors if they’re marked at both ends with tape or paint.

The new color should follow the common industry practices outlined here, but do be sure to include a notice at the main electrical panel or sub-panel indicating what the markings mean.

Black wires are used to provide power in the circuit.

Red or orange wires are often used to provide the secondary phase voltage in a 220-volt application.

Always assume that a red or orange wire (in addition to the black wire, which provides the primary phase voltage) is live. You’ll find black and red or orange wires connected to 220-volt appliances like electric water heaters, well pumps, and older electric ranges. However, those same 220-volt appliances can be wired with a black and white wire, where the white wire had been marked with black or red tape at both the appliance and in the main panel to indicate that it has been re-purposed as a current-carrying wire. In that wiring scheme, assume the black and re-marked white wires are live.

Red or orange can also be used as a second “switched” power wire in a 120-volt application.

Red can also be used as a “signal” or “trigger” wire in three-wire interconnected smoke detector applications.

The trigger wire is used to activate all the interconnected smoke detectors the instant one detector senses smoke or fire. In that wiring setup, the smoke detectors get power and neutral from the black and white wires, while the red wire connects each hardwired detector. Each detector brand and model series uses a different signaling technique and voltage, so refer to the manual when connecting. Always assume the red wire in those applications is live.

Blue, yellow, violet, and brown wires often act as the “travelers” to transfer power between the switches in 3-way and 4-way switch applications.

In other words, blue, yellow, violet, and brown wires come into play when you have multiple wall switch locations—two in a 3-way switch or three in a 4-way switch—that control the same set of lights. Since they carry current between each of the switches, you should always assume those colored wires are live. Alternatively, wires in these colors can also be used to carry power in 220-volt applications; here, too, you should always assume they’re live.

Safety Tips for Working with All Types of Electrical Wires

Proceed with caution when observing and interacting with wires, no matter the color. The National Electrical Code contains strict wire color rules for grounding and neutral conductors, but it’s less rigid when it comes to other colors. We’ve listed the typical uses for wire colors based on common industry practice, but you shouldn’t assume that the wiring in your home was done correctly by a professional electrician. To protect yourself:

Solved! How High to Install a Light Switch
Advertisement

How To: Install a Smoke Detector

The Best Electrical Tape for Your Projects