Solved! Why It’s a Mistake to Mount a TV Above a Fireplace

If your family regularly congregates in front of a roaring hearth, wouldn't it make sense to situate the TV there too? Here's why you may want to reconsider the idea. 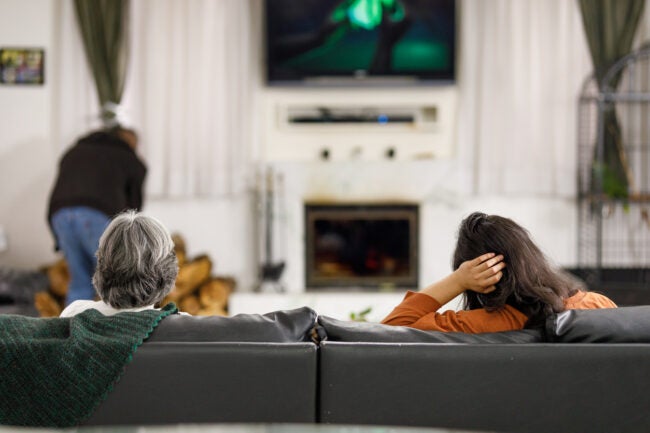 Q: I’d like to hang a new 65-inch TV over the fireplace in our family room, but my partner’s afraid that heat from the fire will damage it. Is it really a bad idea to mount a TV above a fireplace?

A: Talk about a hot-button issue! You’re not the first person to consider mounting a TV above a fireplace. In fact, home builders often install electrical and cable outlets over the mantle (the horizontal shelf above a fireplace) for just that purpose. But depending on the type of fireplace you have, it could very well be a mistake to hang your new television there—for reasons that go beyond the heat. Below, find out why it might be best to choose a different location rather than hanging the TV above a fireplace.

Mounting a TV above a fireplace is generally not advised because excess heat and electronics don’t mix.

The area above the fireplace is often warmer than other wall surfaces in your home. Consider this: A gas fireplace can generate 20,000 to 35,000 British thermal units (BTUs) of heat per hour. To put that into perspective, it takes approximately 15,000 BTUs per hour to heat an entire 1,400 square foot house during a typical New England winter.

Heat rises, and even a fireplace with a blower directing hot air toward the center of the room will still allow some heat to escape upward, toward the TV on top of the fireplace. Still, a number of factors come into play: The farther the fireplace mantle extends away from the wall, the more it will deflect heat from the above wall and TV. In addition, some fireplaces produce less heat than others, and when combined with a good blower, the wall above the fireplace may get only slightly warm.

You may be able to mount a TV above an electric fireplace, which typically generates less excess heat than a gas unit.

Some electric fireplaces are for ambiance only and don’t produce any heat at all, while others produce a moderate amount of heat—less than 5,000 BTUs per hour. Although that’s not as hot as a gas fireplace, can heat from an electric fireplace damage a TV nonetheless? It depends, but the short answer is yes. Extended exposure to high heat can potentially cause dead pixels and melted components in televisions. To be sure a TV above a linear fireplace will be safe, first perform the thermometer test described below to determine if the wall gets too warm.

Only mount a TV above a fireplace if the temperature up there does not surpass 100 degrees Fahrenheit.

You may have better luck with a fireplace that produces less heat, features a deep mantle, and is equipped with a strong blower. Before mounting a TV above any fireplace, though, complete this simple thermometer check:

Heat damage from mounting a TV above a fireplace could void the warranty.

Watching a TV that’s mounted too high over a fireplace can be a literal pain in the neck.

If you’ve ever had to sit in the front row of a movie theater, you probably left with a kink in your neck from looking up at the screen. Similar discomfort can occur if your TV is mounted above a fireplace, at a higher-than-usual height. The most comfortable angle for viewing a television is when the bottom third of the TV is at eye level. If you watch TV from a recliner that’s tilted backward, you may not develop a sore neck, but those who are sitting upright will likely suffer some discomfort after watching for a few minutes.

So, how high should a TV be above a fireplace? The optimal TV height for most setups puts the center of the screen at 42 inches from the floor. Most traditional fireplace mantles are between 4 to 5 feet tall. This means a TV should be mounted as close to the top of a mantle as possible, but that places it high enough to be uncomfortable and low enough to potentially look awkward. Accounting for the average home ceiling height of 8 feet and the minimum distance between a fireplace and TV required to keep the screen centered between the mantle and ceiling, many TVs above fireplaces may be mounted so high as to put the center of their screens 75 inches off of the floor. That’s almost 3 feet too high!

RELATED: Solved! What Size TV Do I Need?

The image on the screen isn’t optimal when viewed from an angle.

While less of an issue for LED TVs, LCD screens are notorious for being difficult to see from an angle of more than 30 degrees from horizontal. If you mount the TV flat against the wall above the fireplace and sit on a sofa or loveseat, you’ll be viewing the screen from an angle. The greater the angle, the worse the picture quality becomes. A viewing angle of no higher than 15 degrees is acceptable.

If you have to mount your LCD TV on the upper section of any wall, it’s a good idea to use a mount that swivels, such as this Echogear full-motion TV mount, which allows you to angle the screen downward for viewing and then push it flat against the wall when it’s not in use.

Think creatively when figuring out a better spot to mount your TV.

Even though positioning a TV above the fireplace isn’t advisable, no one says you’re limited to situating a large TV on a small media console. The following ideas will help you think outside of the box for where to place the TV.

Don't want to do it yourself?
Get a pro to mount the TV for you. Receive free, no-commitment estimates from licensed technicians today.
Find local pros

Bob Vila Radio: The One Place You Shouldn't Mount Your TV
Advertisement

10 Doable Designs for a DIY Rug

15 Reasons to Think Twice About an Open Floor Plan