This Netgear Wi-Fi extender proves that you don’t need to spend a lot of money to improve the internet quality in the far reaches of your home. 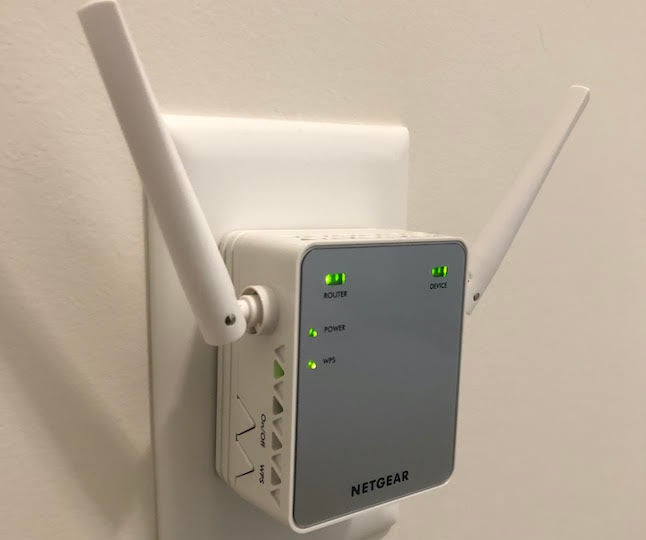 Unfortunately, our router wasn’t cooperating. Despite its four antennas, it struggled to reach those far corners of the house where some of us had fled to seek solitude. A $15 Wi-Fi extender turned out to be our savior.

How does a Wi-Fi extender work?

Easy on the Budget

While I had my sights set on more expensive models that cost around $80, my wife was against spending a lot of money on an extender. Despite my misgivings about purchasing a less expensive model, we settled on the Netgear Wi-Fi Range Extender EX2700.

At the time of publication the EX2700 cost just $14.99; this price point was well below that of its competitors but had loads of positive reviews. Our house isn’t enormous, so we figured that its ability to add 800 square feet of coverage at speeds of up to 20 Mbps would be sufficient for our needs. Because the extender features WPS I knew it would be easy to set up, and it supports the standard wireless encryption protocols, so I knew it would be secure.

The EX2700 consists of a small box about the size of a plug-in air freshener with two small antennas jutting up from the top. Because we planned on situating the extender in the hallway, I liked the fact that it was small and unobtrusive. There are four LED indicators: One for power, one for Wi-Fi security, and one each for the connection to the router and device. It also has an ethernet port for directly connecting devices, such as a TV or desktop, for faster speeds.

Let’s get down to brass tacks here. A Wi-Fi extender is only as good as its ability to expand the reach of the router. If it can’t do that, it’s really just an expensive night light. So, after I got everything connected, the kids and I manned our devices for a test drive.

The connections immediately felt faster. Pages on my computer appeared to load more quickly, there seemed to be less load time with my daughter’s angsty teen dramas, and my son’s favorite British YouTube gaming influencer was no longer laggy. But were things really better or was it just wishful thinking?

Unsatisfied with anecdotal evidence, I looked for something more concrete. Sure, my computer was showing an excellent connection to the extender from its location in a corner of the house far, far away, but was the extender really relaying a higher internet speed? I decided to get more scientific and headed to SpeedTest.net, a free site that analyzes internet performance.

I connected to the router directly then proceeded to test the connection on the site. I recorded a maximum speed of 10 Mbps with my computer, which was registering a “fair” connection to the router (about 2 out of 4 bars). I repeated the same test, this time connecting to the extender, and recorded a speed of about 21 Mbps. The extender worked!

The EX2700 does have its limitations. It will connect only to a router’s 2.4 GHz bandwidth and is not compatible with the faster, though shorter range, 5 GHz bandwidths.

Also, although the packaging mentions Wi-Fi up to 300 Mbps, this claim is a bit deceiving. This appears to be a speed that is possible if the extender is in close proximity to the router, which would defeat the purpose of having it. Netgear actually says it works best for speeds up to 20 Mbps. With a speed range of up to 20 Mbps, the EX2700 falls well short of the speeds you’ll get connecting with extenders at the much higher $80 to $100 price point. Still, at under $15, the EX2700 is one of the least expensive means of extending a router signal (short of using aluminum soda cans).

Retiring? These 20 Essential Products Will Help You Take It Easy ...

The Best Gadgets and Appliances on Sale at The Home Depot