Tired of that dingy popcorn ceiling? Give it a smooth refresh by removing the old texture and applying a bright new finish. It's easier than you thought! 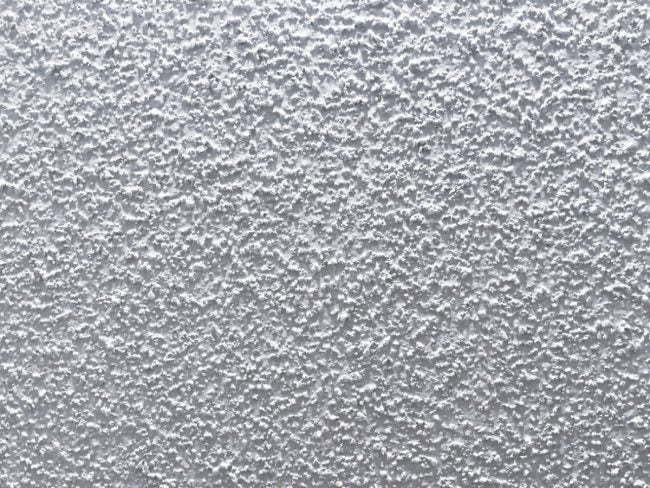 They are cheap and easy to install, and they camouflage a host of flaws, but popcorn ceilings are also dated and tend to look dirty after just a few short years. Removing a popcorn ceiling (also called a “cottage cheese” or “acoustic” ceiling) can be messy and time-consuming, but the right techniques and tools can help you make quick work of this otherwise tedious task. Read on to find out how you can use an unexpected tool to take care of your popcorn problem and apply a fresh new texture.

But Before You Begin… 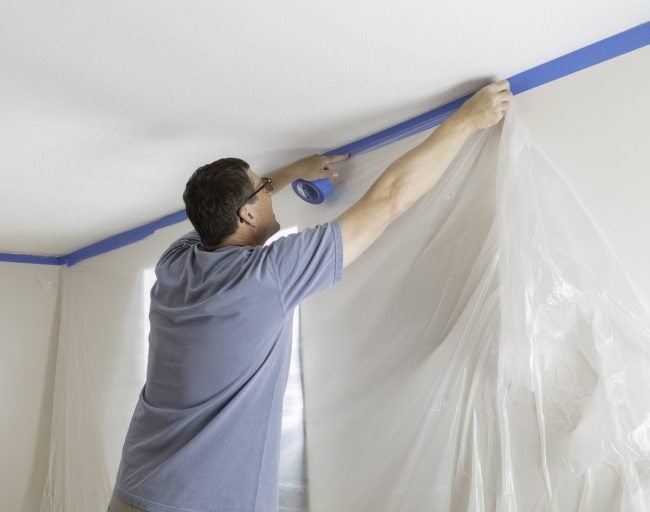 When it comes off the ceiling, the damp popcorn texture will stick to anything it touches. Minimize cleanup by clearing the room, taping off the walls with plastic film, and covering the floor with a disposable plastic drop cloth. Remove any existing ceiling fixtures, and use painter’s tape to mask outlets and cover up electrical boxes. If the room has ceiling fixtures, cut the power to the room at the breaker box before you begin. You’ll want to wear old clothing that you can dispose of later; if you don’t have an old pair of shoes that you’re willing to toss out when you’re done, slip a pair of disposable shoe covers over your footwear. 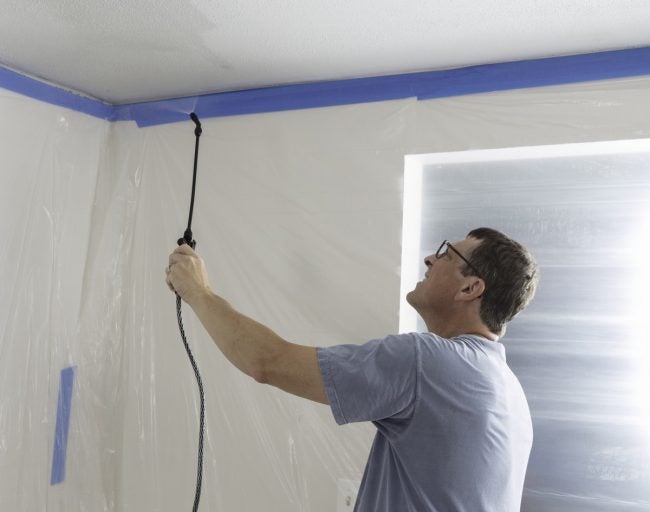 Fill a garden sprayer with lukewarm water and spray the entire ceiling. Give the water about 15 minutes to soak in and soften the texture, and then test a small spot with a putty knife. If it comes off easily when you scrape, it’s ready to remove; if it sticks, spray again and test in another 15 minutes.

Texture that has been painted over at some point may take up to an hour of spraying and testing before it’s saturated enough to remove. It’s worth waiting, though: Popcorn texture, which is made up of tiny foam beads embedded in a soluble compound, is often crumbly when dry; just running your fingers over it can dislodge some of the friable fibers. A wet ceiling is not only much easier and quicker to remove, but it sidesteps an airborne mess. 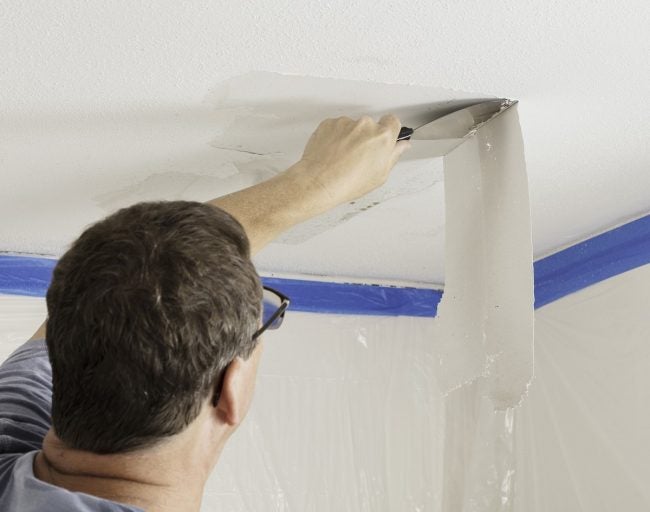 STEP 3: Scrape off the popcorn ceiling, working in sections.

First, scrape away a swath of texture all the way around the perimeter of the ceiling. This will prevent you from later bumping into the drywall tape that runs along the ceiling and tearing it with the knife. To remove the texture without leaving streaks behind—which can happen if the ceiling is too dry or your strokes are haphazard and you miss spots—proceed to work in sections of about four square feet. Continue spraying the ceiling as needed to keep the texture moist and easy to remove.

Hold the 6-inch Black & Silver® Flexible Joint Knife (available at hydestore.com; $12.16) at a 45-degree angle to the ceiling and apply light pressure to lift the popcorn texture off. If sufficiently saturated, it will come off easily. The flexible blade works especially well here because it bends slightly to conform to the ceiling’s surface as you go, allowing you to remove the texture without gouging the drywall underneath.

STEP 4: Let the wet popcorn ceiling fall where it may, or minimize the mess even further.

It’s pretty standard practice to scrape away the wet texture in sheets and let them fall to the plastic drop cloth below. Then, when you’re done, you can just pull up the plastic sheeting and bundle it all up for the trash.

But, if you’re working on a ladder and you keep a large trash can or even a cardboard box handy below, you can use a second knockdown knife, such as HYDE’s 24-inch MAXXGRIP PRO Knockdown Knife (available at hydestore.com; $29.97) to direct it into the receptacle. As you scrape off a swath of popcorn texture with one hand, have the 24-inch knockdown knife ready in the other to catch it as it falls. You can then just drop the wet texture neatly into the trash can or box. Note that you can’t use this process if you’re standing on the floor with the knife attached to a pole, because you’ll need both hands for the pole.

STEP 5: Sand away any remaining residue.

Sand away any residue left behind by the old popcorn texture using a drywall pole sander, and then roll on a coat of white ceiling primer.

Don’t fret if your ceiling is now clear but not perfectly smooth. When ceilings are constructed with the intention of covering them in popcorn texture, builders may feel comfortable cutting corners—working with uneven drywall panels or poorly taped joints, for example—knowing these flaws will be hidden. Rolling on a plain coat of paint won’t camouflage the problems, but a new texture (one that doesn’t feel outdated) may make the ceiling more attractive. One of the most flattering types of ceiling texture, known as “knockdown,” offers a smooth and partly stippled look. 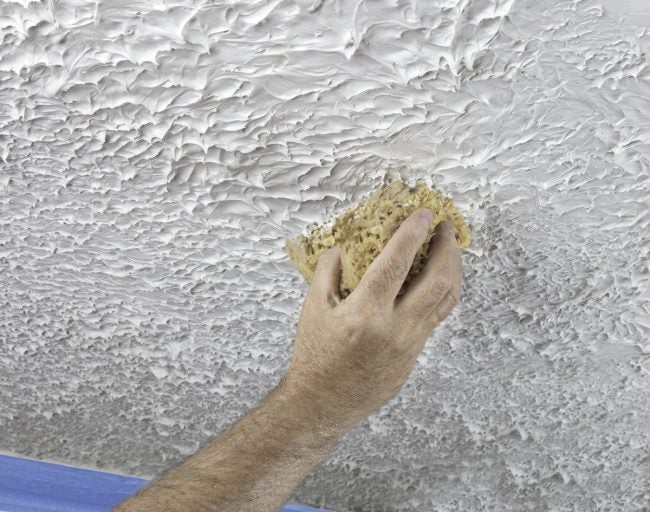 STEP 6: While the primer dries, practice your new texture.

Mix drywall compound thoroughly with water until it’s the consistency of thick pancake batter. Then, sponge it evenly onto a spare piece of plywood or drywall as a trial run—after all, creating a consistent and pleasing knockdown texture takes some practice!

Let it set for a few minutes, then smooth off just the tips of the still-wet texture using either the 18-inch or 24-inch MAXXGRIP PRO Knockdown Knife (available at hydestore.com; starting at $24.44). Don’t use pressure, but instead barely make contact with the tips of the wet compound, leaving the ceiling with attractive mounds and peaks of compound. For best results, keep your swiping motions as light as a feather. 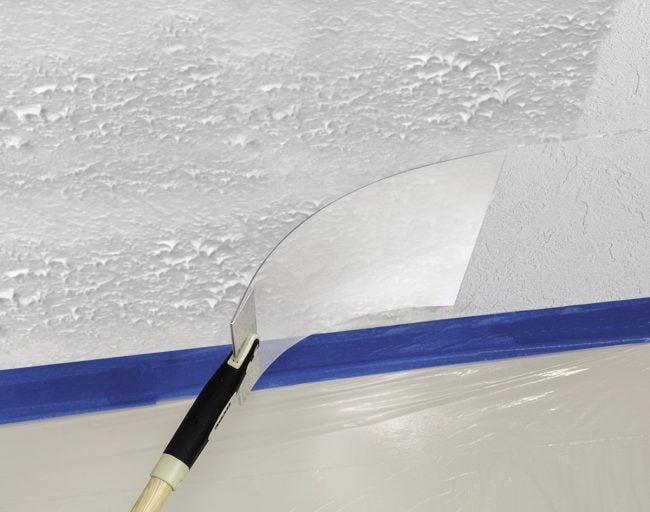 STEP 7: Apply the knockdown texture to the ceiling in full.

Once you’re confident you can create a pleasing texture on a test board, it’s a good idea to recruit a helper. Your helper can apply the texture to the ceiling with the sponge, and you can follow behind with the knockdown knife. Try working in four-square-foot swaths from one side of the ceiling to the other. Move quickly and don’t take a break until you finish the entire ceiling. You’ll want to keep a wet edge between the sections to achieve uniform and professional results.

The content is paid advertising created in partnership with Hyde Tools. Its facts and opinions are those of BobVila.com.

How To: Remove a Popcorn Ceiling

How To: Texture a Ceiling

7 Types of Wall Texture and the Techniques Behind Them

All You Need to Know About Beadboard Ceilings