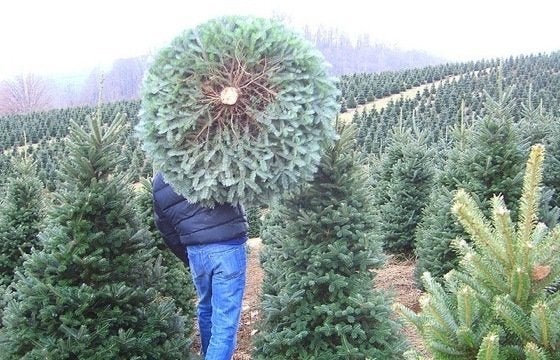 Christmas season is upon us so it’s time to dig around in the attic, the garage, and the basement for all that stored tinsel, and start decorating your tree. Will you choose a real evergreen or will you go faux?  More than thirty million evergreens are sold every year, but increasingly, consumers are choosing to purchase artificial trees. Last year, Americans bought about twelve million artificials, which means the debate between real and fake has only become more heated since Teddy Roosevelt declared in 1901, “It’s not good to cut down trees for mere decoration.”

The reasons to pick a real tree are numerous—the fresh scent that can’t be bought, the tradition of picking one out, and pure authenticity. An exhaustive, independent study released in 2009 by Ellipsos, a Montreal-based sustainable development consulting firm, even indicated that despite Teddy’s stance, on a year-to-year basis, a cut pine leaves a smaller carbon-imprint then its artificial copy-cat. Because Christmas trees are raised expressly for the purpose of being cut down, tree farmers aren’t destroying forests to get their crop. Additionally, the 400 or so million trees currently maturing (it takes 7-10 years before a tree is ready to cut) on farms generate oxygen and provide habitat for birds and animals, as well as preserve acres of farmland and green space from urban development. Artificial trees on the other hand, contain PVC and other plastics, and metals that can’t be recycled. Unfortunately, they are also often made overseas. Over time however, they end up having about the same carbon imprint as a living tree: As long as you use the artificial version for at least nine yuletides, the environment isn’t a reason not to get one. And the reason to purchase one are numerous—so much so that over half of Americans now choose to go with a fake.

Thomas Haman, founder of Balsam Hill and one of the Directors of the American Christmas Tree Association (christmastreeassociation.org) says the most common reason people cite when going artificial is saving money. A good quality version can cost quite a bit up front, but over the course of many years, it works out to be a great deal, especially if you follow the growing trend of installing several trees in your home. Artificial trees are also much easier to set-up, most with those highly irritating lights already strung, and they don’t have any sap or carry mold to irritate those with allergies. “Another factor not to overlook is that artificial trees are less of a fire risk that a dried out real tree that has been under watered for several weeks,” says Thomas.
Advertisement

Paying attention to a few telling traits will secure you a good quality artificial tree. “Take a look at the warranty,” suggests Thomas. How can you center a yearly tradition on something guaranteed for only one season? Certain details in particular make for a more realistic tree, particularly the needle tips. High quality trees have hand-painted molded tips and a brown stem; others will have shredded tips and be completely green. Don’t neglect to examine the density of the branches—you don’t want to be able to see the pole when the tree has been properly fluffed out. Finally, get one made mostly from polyethylene, and that actually resembles a real species, not just taking the name of one.

To keep your artificial tree looking real year after year, store it in a plastic tree storage bag in a cool, dry spot. Garages, or basements are best, and a vented attic is ok too. But you don’t have to rush to put your artificial tree away—one of the nicest perks is that they will last as long as you decide to continue caroling.

For more on Christmas trees, consider:

The Best Christmas Tree Stands of 2023

Buy or DIY: 7 Hanging Planters for the Great Indoors

9 Home Repair Remedies to Borrow from Your Medicine Cabinet