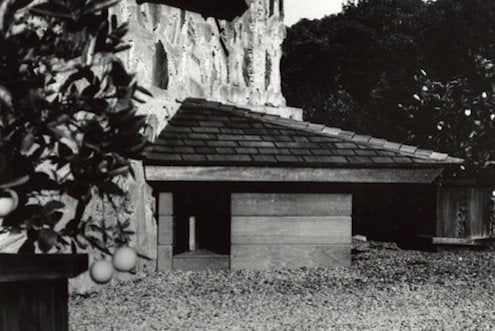 In the summer of 1956, a 12-year-old boy wrote a letter to Frank Lloyd Wright to see if the architect would design a doghouse for his Black Labrador, Eddie. The letter, in part, read:

“I would appreciate it if you design me a doghouse, which would be easy to build, but would go with our house…” (the Wright-designed Robert Berger House in San Anselmo, CA). The boy went on to write that his dog was “two and a half feet high and three feet long” and that “the reasons I would like this doghouse is for the winters mainly.”  He offered to pay for the plans out of money from his paper route.

While the architect declined at first, he did ask the boy to write him again in six months. The boy did and shortly thereafter received a complete set of drawings in the mail, free of charge.

The triangular doghouse was designed, as requested by the client, in conformity with the main house and included signature Wright details, most notably the low-pitched roof with exaggerated overhang.  The architect suggested that the boy use the scrap pieces of Phillipine mahogany and cedar left over from the home’s original construction.

While the original doghouse was destroyed, a reconstructed version has been created from the original plans, still in the possession of the now 65-year-old young lad, Jim Berger (pictured above). The doghouse will be touring the country for screenings of Romanza, a documentary about the architect directed by Michael Miner. Watch the film trailer below:

For more on doghouses, consider:

Fab Doghouses
Bob Vila Radio: In the Doghouse
10 Over the Top Ways to Pamper Your Pet

13 Beautiful Ways to Use a Backyard Pergola

Wing It: 14 Approaches to a DIY Birdbath