Fire is a devastating show of strength by Mother Nature. Take these steps to prevent it in your workshop. 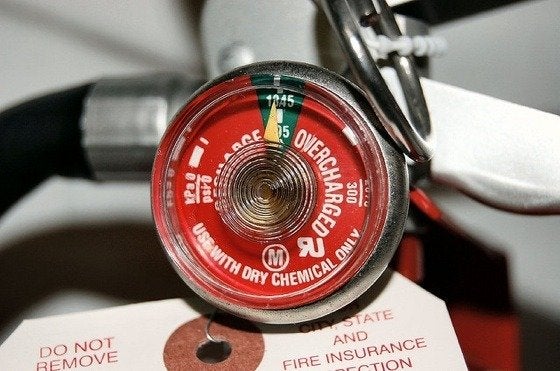 It hardly needs to be said, but you should of course do everything you can to reduce the risk of fire in you workshop. Fires are not only dangerous and expensive: Big ones are also frightening in a way that few domestic events can match. Fire is one of Mother Nature’s ways of reminding us of her raw and immeasurable power.

A few simple precautions are in order. For one, consider at the planning stages what you will do with flammable materials, liquids such as solvents, paints, and finishes, for example, should be stored in a metal cabinet away from the furnace or any other source of heat. Make sure the top of each can is tightly closed. If you ever use gasoline for cleaning parts or other tasks, use it outdoors or in a well-ventilated space separate from the house. Don’t store gasoline, benzene, and other inflammable solvents in your home.

In planning and, eventually, in working in your shop, you must consider the risk of fire—and how it can be minimized. In woodshops in particular, the dangers are considerable, because of the omnipresent sawdust. If your shop is within the walls of your house, a light, fireproof door is a sensible precaution. A double layer of gypsum wallboard on the cellar ceiling or garage dividing wall (it may already be in place there, as it is code in many areas) will act as a fire barrier.

But the simplest and easiest precaution you can take is to install a smoke detector. It’s an inexpensive, yet highly effective way of alerting us to the presence of a fire, often before our own senses call detect it. The loudness of a smoke alarm is undeniable—and when there’s a fire, that’s good news.

Some smoke detectors can be fooled by dust and steam. But when sensibly located they perform an essential service when a fire occurs and are no inconvenience when nothing is burning.

Smoke Detector. There are several types of smoke detectors, and the best choice for a workshop is the photoelectric variety. It detects smoke entering the device when it deflects a beam of light, and, unlike the ionization detector, the other common design, is less likely to be triggered by only a minor amount of smoke in the air.

The perennial complaint in workshops, however, is that even photoelectric detectors are fooled by the presence of particulate matter such as sanding dust or sawdust.

To minimize the likelihood that yours will sound its screaming warning (and provoke you, on the third or fourth false alarm, to disconnect it, thereby defeating the whole purpose), be sure to locate the smoke detectors according to the manufacturer’s instructions (which usually means away from corners).

Equally important to keep in mind is that the detectors should be as far away as possible from sawing and sanding stations.  If your shop is located out of hearing range from the rest of you home, link the smoke detector to another similar device inside the house or to a central alarm system.

Fire Extinguisher. Buy one. Or even two. That’s my first piece of advice. Next, make sure the fire extinguisher you buy is marked ABC or BC. The letters mean that it’s a dry chemical fire extinguisher, and is effective against all three major classes of fires. (Class A is burning ordinary materials like wood and paper; Class B, flames fed by grease, oil, or other flammable fluids; and Class C, electrical fires.)

Choose a convenient spot to locate the fire extinguisher, preferably near the entrance. Don’t shove it into a corner, or beneath a tool stand or table. Set it at a level that can be reached by adults and not-quite-grown-ups alike. Many models come with brackets designed for the purpose. If you often work with paints or solvents, buy two fire extinguishers and locate the second one over the bench or table at which you do most of the finishing or cleaning work.

A sprinkler system is also an option; if you have plumbing skills, it needn’t be prohibitively expensive. Heat-sensitive sprinkler heads will release a spray of water when set off. Take care, however, when maneuvering lengths of stock about the shop: a good hard bang with a one-by-four will deliver an immediate shower. A basketlike guard is a good idea, though no guarantee of protection.

How To: Stock Your Workshop
Advertisement

Manage Noise in Your Workshop

Get to Work! 13 DIY Workbenches, Craft Counters, and Potting Tables